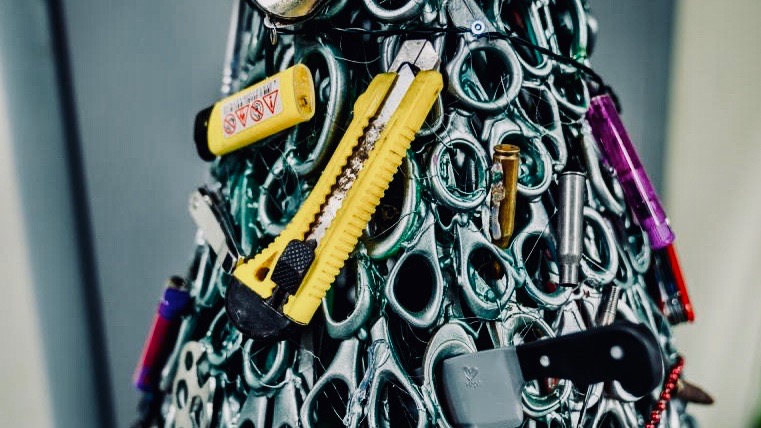 A security team at Vilnius airport in Lithuania has managed to find its muse in what might seem—superficially—like an entirely uninspiring job, especially around the holiday season.

After dealing with throngs of harried travelers who insist on carrying prohibited items all year long, although they are listed on the airport website (pdf) and even depicted in images, one airport security team took a creative approach to informing passengers this year. They decorated a Christmas tree with all of the prohibited items they collected from negligent travelers throughout the year, turning confiscations into Christmas cheer.

What’s more, this was done with great aplomb and without any tree to speak of. Decorated densely with knives, scissors, boxcutters, lighters, nail clippers, keychains, bottle openers, and bullets, the conical statue is topped with an impressive, elegant star made of small daggers joined at the handles.

“With the winter travel season well under way, the Aviation security officers at Vilnius Airport opted for an unusual take on the Christmas classic, aiming to send an educational message on the importance of aviation security,” Lithuanian Airports announced on LinkedIn this week, calling it “a truly unique educational masterpiece.”

Some observers agreed, but not all, which is perhaps just more proof of the statue’s artistic value.  “Wow this is a serious piece of art!” wrote one aviation executive from England in response to the airport’s post. Yet the Independent deemed it dour, calling it “the least cheerful Christmas tree ever.”

But this creative gift from airport security also comes with a warning. “With knives, scissors, lighters, blades and all other sorts of dangerous goods on it—this Christmas tree has it all. So if you don’t want your personal, yet prohibited, belongings to land on our next year’s Christmas tree—better check out the baggage requirements before you pack for your next flight,” the post noted.

Despite the boast about having it all, there was one controversial type of prohibited item that appears to be absent from the Lithuanian Christmas tree that American airport security personnel confiscate at a rate of about 10 per day: guns. As Quartz’s Justin Rohrlich has explained, agents intercept thousands of firearms, loaded and unloaded, at hundreds of airports across the US, with the numbers rising each year.

The Vilnius airport’s artful Christmas tree’s only visible gun looked to be made of masking tape, apparently created to display a bullet hanging from a keychain.