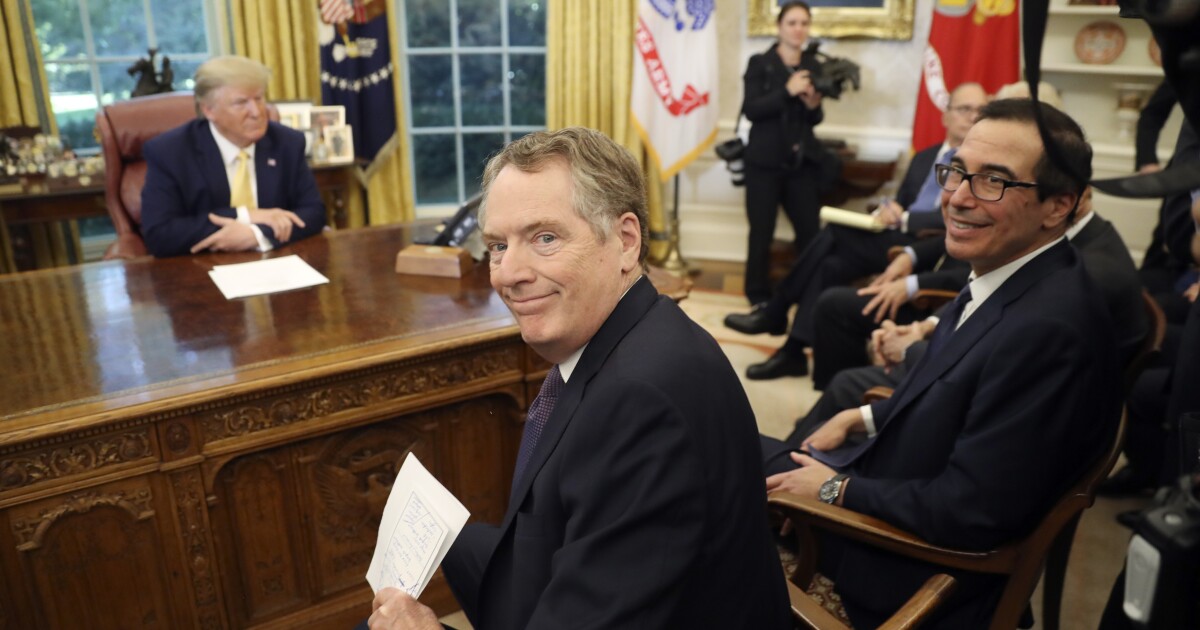 President Trump will not impose new tariffs on an additional $160 billion of Chinese imports that were scheduled to take effect this weekend, after tentatively signing off Thursday on a so-called phase-one trade agreement with Beijing, according to an administration official close to the process.

Trump’s promise of a deal overhauling trade with China has languished for most of his presidency, as he toggled between negotiating an “epic” deal and punishing Beijing with tariffs.

While the substance of the phase-one deal — which Trump first announced in early October — remained unclear, it does not come close to a comprehensive resolution of U.S. complaints related to China’s subsidies of its state businesses and its forced technology transfers by U.S. corporations in the country. Those complaints were the basis for Trump’s tariffs and larger trade war in the first place.

Trump met in the afternoon with U.S. Trade Representative Robert Lighthizer, who presented the outlines of the partial deal, according to the official. The president approved. There was no confirmation from the Chinese, although officials have spoken more optimistically in recent days of their talks with the U.S.; they are expected to comment on the trade talks overnight and could confirm a deal on Friday.

Under the framework, similar to partial accords in the past, Trump will hold off on the new tariffs and set a timetable for rolling back existing tariffs, while China would agree to purchase more agricultural products from the U.S., the official said. The deal was expected to include some Chinese actions to protect Americans’ intellectual property and increased market openings in financial services.

In October, Trump said that the Chinese would buy $40 billion to $50 billion worth of U.S. soybeans and other agricultural goods — about double the amount in recent years prior to the trade war. Stepped-up purchases of U.S. farm products have been a priority for Trump as farmers, an important political constituency for him in key Midwestern states, have been hammered by China’s retaliatory tariffs.

Earlier Thursday, Trump had teased the prospect of the agreement just as impeachment hearings were beginning on Capitol Hill. “Getting VERY close to a BIG DEAL with China,” the president tweeted not long after Wall Street rang its opening bell. “They want it, and so do we!”

Stock markets surged on the news, pushing the Dow up more than 200 points to close near its record high.

Over the last 18 months, Trump has slapped tariffs of between 15% and 25% on about $360 billion of products imported from China, prompting retaliation from Beijing that has caused a chill in investments at many businesses.

The tariffs slated for this Sunday, though, threatened to be much worse as tens of billions of dollars worth of smartphones, laptops, toys and other consumer goods would have been targeted.

Chinese negotiators have pushed for a rollback of existing tariffs, but it was unclear how much and under what conditions the U.S. had agreed to do so.

China experts reacted cautiously to word that there was a firm agreement on a phase-one deal, given a history of prior deals that did not materialize and tariff truces that proved short-lived.

“Until you have a document, you don’t really have an agreement,” said Craig Allen, president of the U.S.-China Business Council.

He noted that it would be important to see in writing just what the Chinese agreed to in terms of increased purchases of American imports, including farm goods and possibly energy products. “What we don’t know is, is this an aspirational goal, is it a target or is it a contract?” he said.

Derek Scissors, a China analyst at the American Enterprise Institute who has regular contact with administration officials, said, “A cut in tariff rates was offered to the Chinese last week, but their original reaction wasn’t considered sufficient by the U.S.” He added: “It may be that the Chinese made a purchase offer, including energy, and Trump said yes to the tariff cut.”

Trump has sent mixed signals about his long-running trade negotiations with China. Earlier this month in London, the president seemed nonchalant about resolving the matter, despite the pain for American farmers.

Increasingly focused on his reelection bid and resigned to the reality that he will probably be impeached by the House, Trump has been working to demonstrate a focus on substantive agenda items, digging in on his impeachment defense but avoiding other fights.

Also Thursday, lawmakers appeared to reach an initial budget agreement that would avert a government shutdown before the end of the year. A day earlier, House Democrats signed off on the president’s revamped North American free-trade agreement, giving Trump arguably his most significant policy achievement since the Republican tax cuts approved in late 2017.