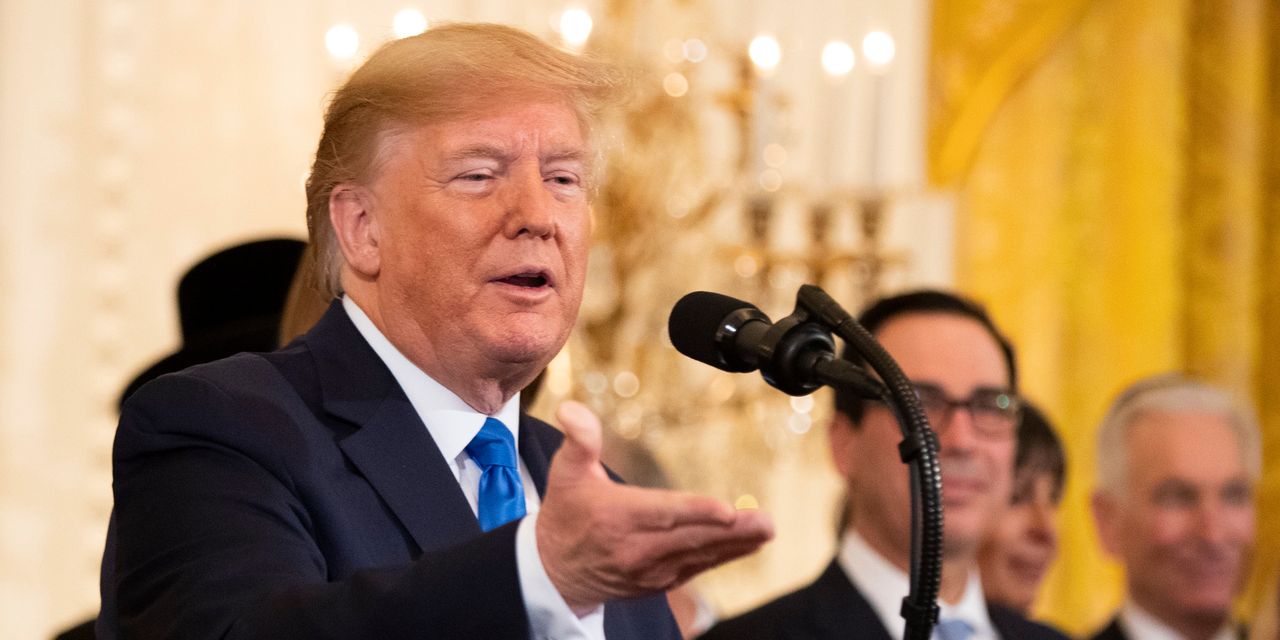 has agreed to a limited trade agreement with Beijing that will roll back existing tariff rates on Chinese goods and cancel new levies set to take effect Sunday as part of a deal to boost Chinese purchases of U.S. farm goods and obtain other concessions, according to people familiar with the matter.

Mr. Trump met top economic and trade advisers on the agreement for an hour Thursday, and senior administration officials were making calls to tout the outlines of an agreement, the people said.

are expected to sign at least the outlines of a deal on Friday, said another person familiar with the matter.

Michael Pillsbury, an adviser to the president, said he spoke with Mr. Trump, who said the deal calls for China to buy $50 billion worth of agricultural goods in 2020, along with energy and other goods. In exchange the U.S. would reduce the tariff rate on many Chinese imports, which now ranges from 15% to 25%.

The Wall Street Journal reported earlier Thursday that the U.S. side has offered to slash existing tariff rates by half on roughly $360 billion in Chinese-made goods, in addition to canceling the tariffs on $156 billion in goods that Mr. Trump had threatened to impose on Sunday. That offer was made to Beijing in the past five days or so.

Should Beijing fail to make the purchases it has agreed to, original tariff rates would be reimposed. Trade experts call that a “snapback” provision, though the president didn’t use that term, Mr. Pillsbury said.

In what Mr. Pillsbury described as a “goodwill gesture,” the U.S. plans to announce some tariff rate cuts on Friday. “The president is upbeat and enthusiastic about his breakthrough,” according to Mr. Pillsbury, a China scholar at the Hudson Institute who advises the Trump administration.

The president has stressed that a so-called phase one deal—which also includes measures to improve intellectual property protection, open the Chinese financial services market and prevent currency manipulation—is expected to lead to a phase two deal. That agreement would tackle more difficult problems, including forced-technology transfer, subsidies, and the behavior of Chinese state-owned firms.

A spokesman for the Chinese embassy didn’t immediately respond to a request for comment.

The limited trade pact could help revive U.S. agricultural exports to China. Such sales had collapsed over the past year and a half, with China retaliating against U.S. tariffs by halting farm purchases. U.S. farm exports fell from as much as $25 billion in recent years to below $7 billion in the 12 months through May, according to Commerce Department data.

Farm exports to China have begun to climb in recent months as the two sides reached a truce, but remain nearly 60% lower than their pre-trade war peak.

Mr. Trump declared two months ago the two countries had reached a framework for a limited pact to halt the trade war and allow negotiation on possible future phases. Yet efforts to finalize the terms proved elusive until Thursday, just days before new tariffs targeting iPhones, toys and other consumer goods were set to take effect.

Trade groups hailed Thursday’s progress as a welcome respite from what amounts to additional taxes at the border. Importers, retailers and other American firms had worried more duties—essentially U.S. taxes charged at the border—would have the effect of raising prices or hurting sales.

“We welcome the news that a U.S.-China phase one deal is imminent,” said Myron Brilliant, executive vice president and head of international affairs at the U.S. Chamber of Commerce. “It will bring stability to the U.S.-China relationship, but make no mistake about it: There is still more work ahead and more problems to be solved.”

Others raised concerns that rolling back tariff rates could take away U.S. bargaining clout for future negotiations with China on later phases of the deal.

that the “White House should consider the risk that a near-term deal with China would give away the tariff leverage needed for a broader agreement on the issues that matter the most such as subsidies to domestic firms, forced tech transfers & blocking U.S. firms access to key sectors.”

In the past, emerging deals with China have collapsed, including a nearly completed pact in May whose demise triggered a sharp escalation in tariffs from Mr. Trump and a reduction in offers to make economic overhauls in China. Trade experts cautioned that any final deal should include a complete text backed by Washington and Beijing.

“Without public text of the agreement, there is no true deal,” said Derek Scissors, a trade expert at the American Enterprise Institute who has advised the Trump administration. “The president will get hammered on a deal no matter what—the real test is if he sticks to it when the heat rises.”

The White House had no immediate comment on the emerging deal.

“Getting VERY close to a BIG DEAL with China,” President Trump wrote in a tweet Thursday morning: “They want it and so do we!”

If the two countries confirm and sign the limited pact, it will show the Trump administration is eager to follow through on promises to notch new deals with trading partners on the eve of his 2020 election year and possible impeachment.

On Tuesday, House Democrats said they reached a deal with U.S. and Mexican officials on a revised North American trade pact expected to win congressional ratification in coming months.

Will China accept the Trump administration’s olive branch? Why or why not? Join the conversation below.

The phase one deal with China, if completed, would cover only a small portion of the U.S. complaints against China’s trade practices, leaving largely untouched such fundamental issues as subsidies and Chinese pressure on American firms to share technology. Many in the U.S. business community remain skeptical that discussions on phase two or phase three deals will bear fruit.

In recent months, the U.S. has been collecting about $5 billion a month from the tariffs on China, which are paid by U.S. importers. If all the tariff rates were cut in half, it would save American companies about $2.5 billion a month, or $30 billion a year, in tariff payments.

chief U.S. economist at Oxford Economics, estimates that cutting the tariffs by half would boost U.S. economic growth by about 0.2 percentage points next year, but cautioned that uncertainty would likely linger.

“Importantly, we can’t reverse the damage already done by the two-year long trade war, nor omit the dense fog of uncertainty that will continue to restrain business and consumer activity in 2020,” Mr. Daco said.

Most economists estimate that the tariffs had taken a toll on the U.S., contributing to U.S. economic growth slowing to about 2% in recent quarters, from about 3% last year. The International Monetary Fund, for example, has estimated the tariffs would lower U.S. growth by 0.6 percent. The toll was even sharper on China, with growth estimated to drop 2%.