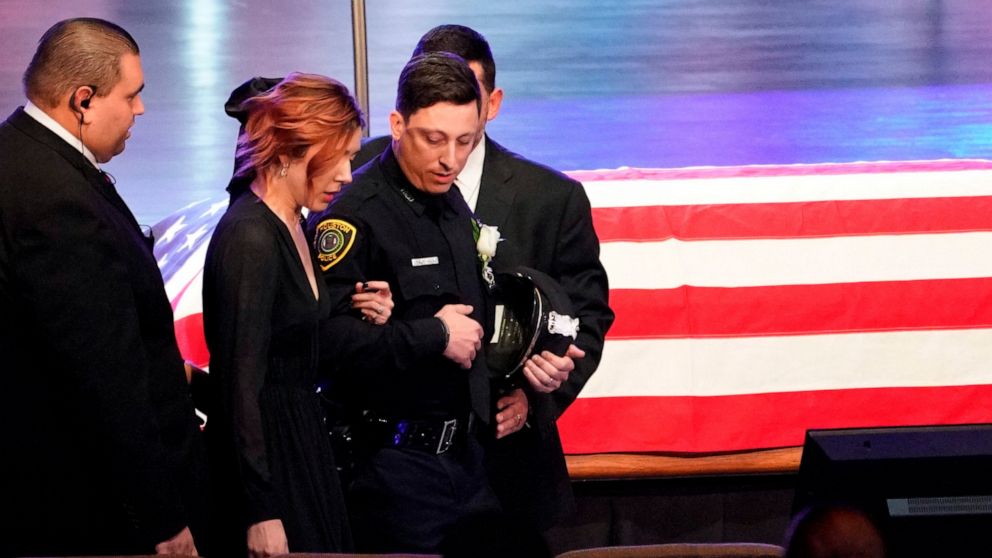 HOUSTON —
A Houston police sergeant who was fatally shot while responding to a domestic violence call was remembered at a funeral service Thursday for his friendship, his faith, his quirkiness and his service to others.

Family, friends, fellow officers, and local and state officials gathered at a Houston church to honor Sgt. Christopher Brewster, 32, who was killed on Saturday. A dying Brewster managed to radio in a description of the gunman, and police subsequently arrested 25-year-old Arturo Solis. He remains jailed after being charged with capital murder.

J.J. Cole, a lifelong friend of Brewster, told mourners that Brewster “had a deep reverence for what his badge meant.”

Cole also described Brewster as having “some quirky tastes” and being “wonderfully weird.” Cole said Brewster loved gardening and had a backyard full of fruit trees.

“I know that one day, we will see him again. But it’s hard to face the reality that after so many miles of doing life together, he won’t be with us any more on this side of heaven,” Cole said.

Houston police Chief Art Acevedo told mourners that Brewster was someone “raised to put himself at risk for others.”

“Although a coward attacked him, he didn’t realize he attacked a man of faith that was a servant to others and a leader to his men and women,” Acevedo said.

Brewster graduated from the police academy in 2010 and was promoted to sergeant in February. He’s survived by his wife, parents and sisters.

The Houston area is also mourning the death of Nassau Bay police Sgt. Kaila Sullivan, who was killed during a traffic stop Tuesday night. Authorities announced Thursday afternoon that the man accused in her death had been arrested after a nearly two-day search.

A funeral was also scheduled for Thursday afternoon for Arkansas police officer Stephen Carr, who was shot Saturday night while sitting in his patrol car in Fayetteville. Carr was the son of a retired Houston police sergeant.