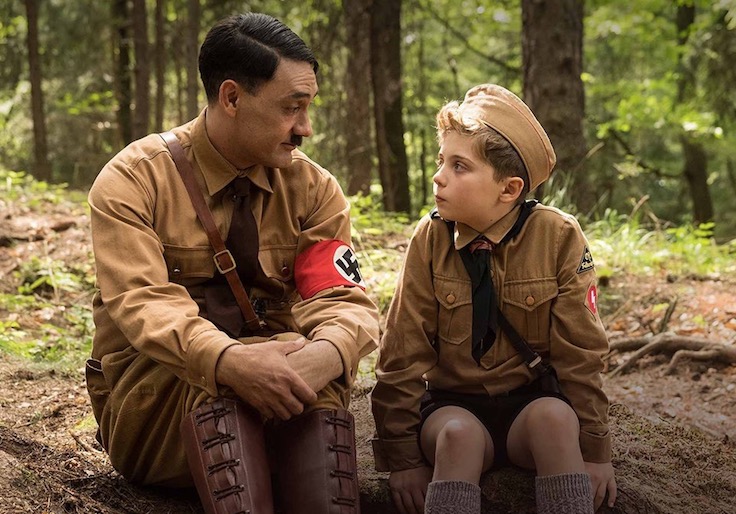 If there’s anything worse than whimsy, I haven’t encountered it. Fine—murder is worse than whimsy. But only just a little. Which is why I avoided seeing Jojo Rabbit, a new movie written and directed by the New Zealander who made Thor: Ragnarok. His name is Taika Waititi, though he went by Taika Cohen (his Jewish mother’s last name) until he decided to take his Maori father’s surname.

Once I learned he had changed Cohen for Waititi, I was concerned he had done it for purposes of whimsy, and so I was ready to declare him my sworn enemy—especially after reading he’d done a one-man stage presentation called Taika’s Incredibler Show (a sequel to Taika’s Incredible Show). Incredibler? Whimsy! And then I was sure Waititi should be destroyed after I saw the movie he made before Thor, which is called Hunt for the Wilderpeople—so whimsical, that one, that it went down like one of those horrible ultra-sugary beverages they make people drink when they’re testing for diabetes.

Nothing in the Waititi annals could even compare with the nightmarish whimsy that characterizes the trailer for Jojo Rabbit, which features scenes of a little boy in a Hitler Youth outfit gamboling about with Hitler himself while Sam Rockwell and Rebel Wilson mug for the camera. Jojo Rabbit looked a little like a more broadly comedic Life Is Beautiful, a loathsome piece of morally reductionist cutesy Holocaust-set drivel that is maybe the movie I despise more than any other ever made. No! I said to myself. No! In thunder! I will not go!

But then it began to get nominated for year-end prizes and started winning awards and I felt I owed it to you, dear reader, to hate-watch this thing and tear it to shreds. You don’t need to thank me for my sacrifice. Knowing that I’ve brought a little joy into your humdrum life (it’s a quote from Singin’ in the Rain) is more than thanks enough.

So when I tell you that Waititi actually uses whimsy as a storytelling tool in Jojo Rabbit to confound our expectations as his film offers a deepening portrait of a naïve child in a small town in Nazi Germany becoming aware of the inhuman monstrousness of his everyday world, you can trust me when I say I was gobsmacked. After half a century of moviegoing, I’m almost never surprised at the cinema, but Jojo Rabbit surprised me, amused me, touched me, devastated me.

Jojo is Johannes, a boy whose father is (he thinks) off fighting the war and whose glamorous mother (Scarlett Johansson) goes off every day to do things about which he is not in the least curious. Lonely and solitary, he consoles himself through conversations with an imaginary Hitler (played by Waititi), who is every bit the 10-year-old boy Jojo is. As the film begins, Jojo goes off for the weekend to train as part of the Hitler Youth, a broadly comic sequence featuring ludicrous exercises that suddenly becomes something else when Jojo is tasked with killing a rabbit with his bare hands to demonstrate his readiness to serve the Nazi cause. His inability to do so leads to the mocking nickname that gives the movie its title. And the reversal of mood in the scene gives a hint of the reversals Jojo will experience as the movie continues.

Waititi shows an uncommon grace in his portrayal of Jojo, who has had his head pumped full of disgusting ideas he barely even understands. What he does understand is the joy of a uniform, its swastika insignia, and the hunter’s knife that comes with it—and the fatherless fantasy that Hitler could be his intimate friend. (Waititi found an angelic-faced boy in Britain named Roman Griffin Davis to play Jojo, and Davis gives what is unquestionably the greatest child performance since Haley Joel Osment’s in The Sixth Sense 20 years ago.)

His mother is afraid that the Nazis are turning Jojo into a robot, but his problem is not a lack of feeling; it’s too much feeling. It is precisely his openness to emotion that will save Jojo. And it will cause him to experience terrible grief in the town square. It’s a scene that features one of the most devastating and brilliantly rendered moments in contemporary cinema, and fittingly so, since Jojo Rabbit is just an extraordinary piece of work and maybe the year’s best film.