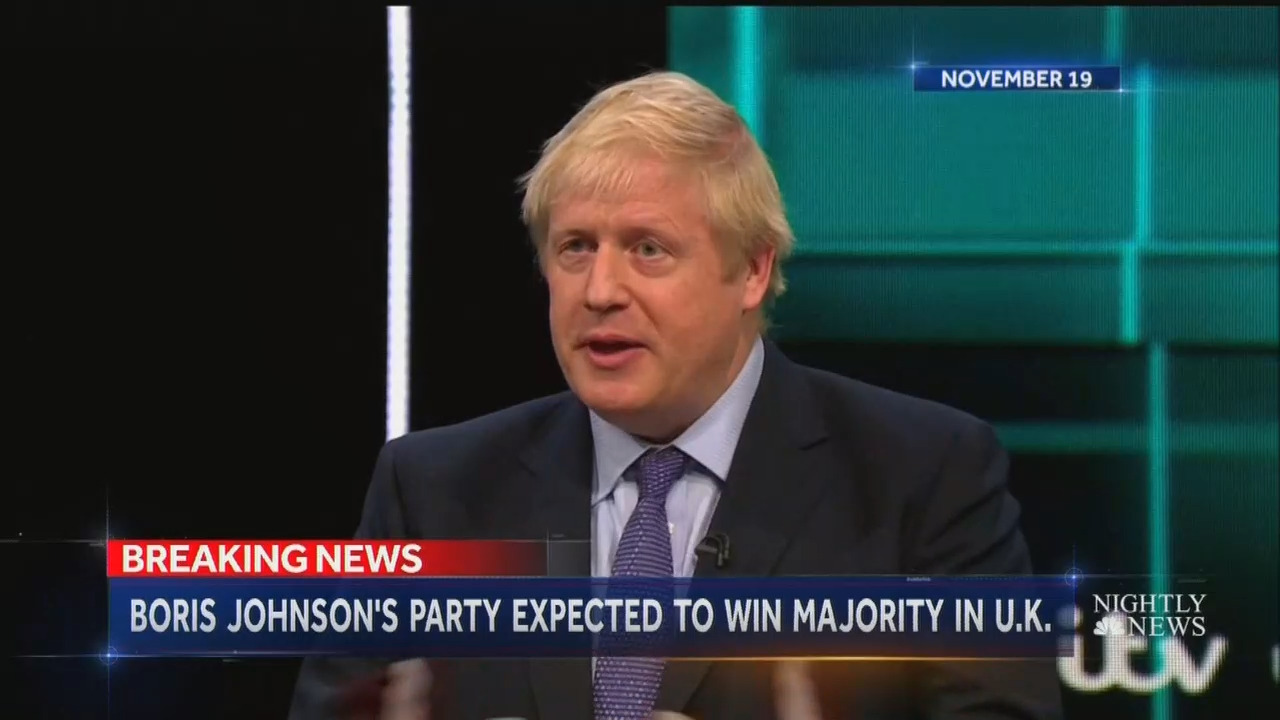 On Thursday night, conservatives worldwide were able to relive feelings of jubilation and bask in liberal meltdowns from 2016, thanks to exit polls predicting a Conservative Party landslide in the United Kingdom’s latest General Election. In the end, projections show a resounding mandate to Boris Johnson for Brexit. Unfortunately, the liberal U.S. broadcast networks didn’t take it well.

In particular, the worst such individual was NBC News foreign correspondent Bill Neely, refusing to mention the following in his hideous NBC Nightly News segment: Jeremy Corbyn, the Labour Party, their anti-Semitism, and their far-left proposals. In other words, Neely didn’t just tell a partial picture, but instead almost nothing at all.

Instead, he trashed Conservatives and Johnson.

Neely stated that, if the exit polls panned out, “it means Boris Johnson will leave Britain” and only won “the Brexit election” after “a bitter angry campaign” in which he “often avoid[ed] media questions,” including an “escap[e] into a milk fridge.”

The NBC journalist also peddled fake news, hyping Johnson for “swiping a reporter’s phone to avoid seeing a photo of a sick boy.” As our friend Shelby Talcott at the Daily Caller News Foundation noted, Johnson did look down at the photo and assertions otherwise are wrong.

Neely continued attacking Johnson, touting how “[t]rust in him was low” before concluding that “Johnson tonight appears to have won the prize….but now, the hard part. Years of trade talks ahead. A deal with the U.S. far from certain.”

Over on the CBS Evening News with Norah O’Donnell, things weren’t much better as instead of anger, feelings of sadness were present.

Foreign correspondent Mark Phillips had the story, fretting that “[i]n the past, these exit polls have proved very reliable” and showed that Johnson was on track to receive the “clean win” needed to carry out Brexit.

Unlike Neely (and as we’d see with ABC), Phillips actually mentioned both Corbyn and Labour before ending with an allusion to “often-dubious facts” that appeared on campaign posters (click “expand”):

PHILLIPS: Of course like the styrofoam blocks in his visual aid, it’s all a bit messier than that. For starters, the main opposition Labour Party leader, Jeremy Corbyn, wanted to fight a different battle, reinvesting in public services, re-nationalizing major industries, and taxing the rich to do it.

CORBYN: Things cannot go on as they were before.

PHILLIPS: This was a different kind of election. Remember that scene from the film Love Actually where a secret message is silently conveyed on a doorstep?

PHILLIPS: In this vote it was Boris Johnson at the door and the cue cards were about politics. This was a social media campaign where individual voters were targeted on their small screens with ads like this and where often-dubious facts came from sometimes anonymous posters. Old party loyalties went out the window in this election. What mattered was whether you were for Britain leaving the E.U. or against it and perhaps whether you were tired of the whole Brexit saga. Boris Johnson took a big gamble in calling this vote, Norah, and he appears to have won.

While CBS gave the election just over two minutes and NBC around 90 seconds, ABC’s World News Tonight could only fester 59 seconds.

“Tonight, it looks like Johnson will remain prime minister and work towards pulling the U.K. out of the E.U. as he’s pledged by January 31st. But the huge task ahead, negotiating a trade deal. The risk of a no deal Brexit still very much a possibility,” he concluded.

LESTER HOLT: It’s election night in Britain where the man who has been praised by President Trump who claims he can finally lead the country out of the European Union appears headed for a decisive victory. NBC’s Bill Neely is in London.

BILL NEELY: The most decisive election in a generation ends with a clear exit poll prediction.

NEELY: If true, it means Boris Johnson will leave Britain as well as his dog and lead it out of the European Union. Johnson determined to get Brexit done. It was the Brexit election, a bitter angry campaign. Johnson often avoiding media questions.

BORIS JOHNSON: I’ll be with you in a second.

NEELY: Here escaping into a milk fridge and swiping a reporter’s phone to avoid seeing a photo of a sick boy.

ITV NEWS’s JOE PIKE [TO JOHNSON]: You’ve taken my phone and put it in your pocket, prime minister.

NEELY: Trust in him was low.

ITV NEWS’s JULIE ETCHINGHAM [TO JOHNSON] Does the truth matter?

JOHNSON: I think it does and I think it’s very important.

DONALD TRUMP: Boris is very capable and I think he’ll do a good job.

NEELY: — even though Johnson was in a group mocking him last week. Britain is facing extraordinary change. Johnson tonight appears to have won the prize. Get Brexit Done was Johnson’s catchy slogan and it seems he’s won big. But now, the hard part. Years of trade talks ahead. A deal with the U.S. far from certain. Lester?