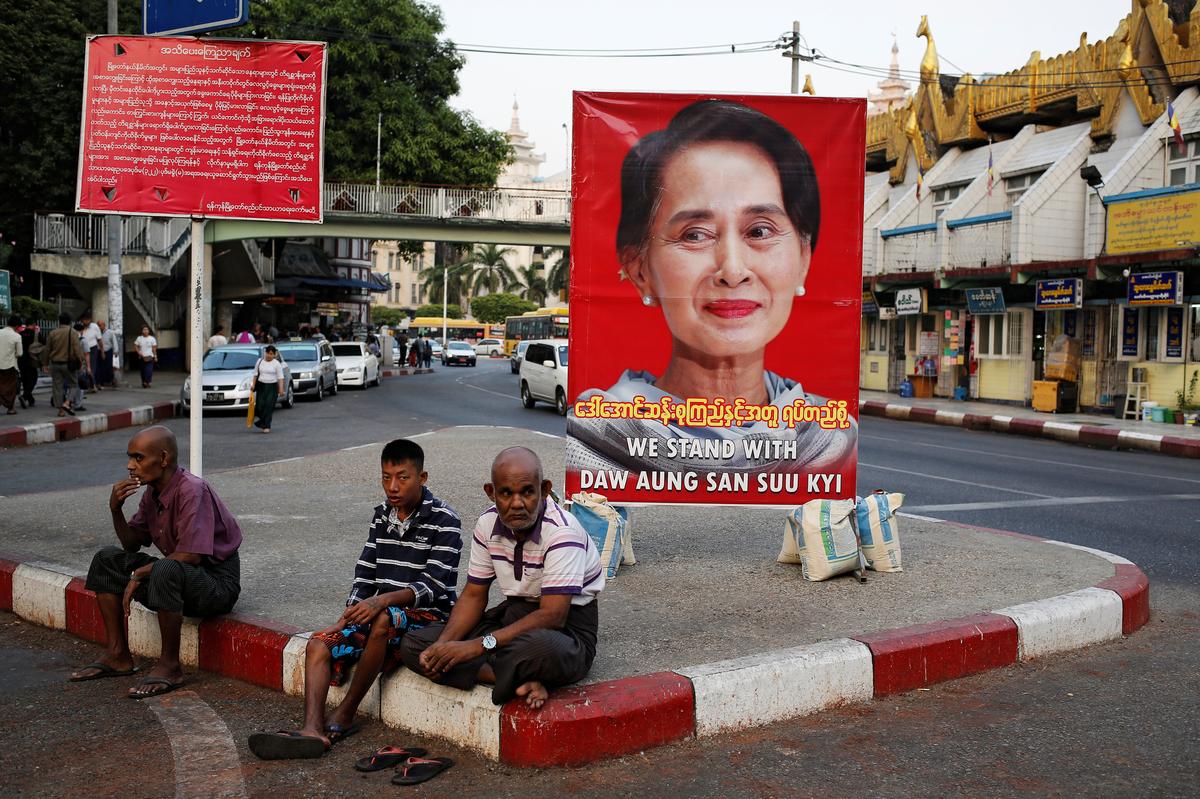 YANGON (Reuters) – Crowds have gathered for the past three evenings in a small park in downtown Myanmar’s capital Yangon to hear accusations of genocide delivered thousands of miles away at the United Nation’s top court in The Hague.

A poster supporting Aung San Suu Kyi as she attends a hearing at the International Court of Justice is seen in a road in Yangon, Myanmar, December 12, 2019. REUTERS/Ann Wang

A dozen who spoke to Reuters voiced unwavering support for leader Aung San Suu Kyi, who is leading a team of lawyers to the International Court of Justice in the Netherlands to defend the Myanmar government and military.

“I’ve come here every day to watch the court hearing,” said U Chaw, a 62-year-old municipal staffer dressed in a blue uniform as he watched lawyers speak on behalf of The Gambia, the African country which brought charges last month.

The testimony has at times been graphic. On Tuesday, Gambia’s legal team outlined testimony of alleged bloody excesses by soldiers, including mass killings, rape, and the burning of hundreds of villages. U.N. investigators estimated 10,000 people may have been killed.

On Thursday, they displayed images of the dead bodies of 10 Rohingya killed in the village of Inn Din.

As the pictures appeared, U Chaw said he had never seen them. Nevertheless, he said, he believed foreign media funded by Islamic groups was spreading false information.

“I am really glad that Daw Suu went there and took a chance to say the truth to the world,” he said.

The Nobel Peace Prize laureate’s shock decision to attend the hearings in person has dealt a further blow to her tarnished international reputation.

Suu Kyi was long feted internationally as a champion of human rights and democracy, and was a high-profile political prisoner during 15 years of house arrest for her opposition to Myanmar’s then ruling military junta.

But her stance on the Rohingya issue has seen her stripped of many awards, calls for the Nobel committee to revoke her peace prize, and strong criticism from former celebrity supporters and other organisitions.

At home however, Suu Kyi, the daughter of Myanmar’s founding father Aung San, is still revered by many.

The proceedings in the Hague have galvanized supporters, who have staged rallies across the country chanting “Stand with Suu Kyi” and waving flags.

On Wednesday, she argued the tribunal, known as the World Court, should not have jurisdiction. She said even if there had been violations of humanitarian law during what she described as an “internal conflict”, they did not rise to the level of genocide and are not covered by the Convention.

The following morning, front pages of all the major newspapers on Thursday featured her speech. One ran a full-page image of her with the words “Stand with Suu Kyi”.

The Irrawaddy, a magazine once synonymous with pro-democracy dissidents, published an editorial titled “Political Correctness and the Genocide Case Against Myanmar”, arguing that it has become “fashionable” to criticize Suu Kyi.

A cartoon that went viral on social media showed the politician in 1989, at the start of her defiance against the military junta, facing rifles held by soldiers.

Beneath was an image of her in 2019, facing representations of the media wielding a camera like a gun and a lawyer with a long knife.

In the park on Thursday, Kyaw Htike, a truck driver, eating biscuits as he watched the hearing, said he believed the true number of people the military killed in Rakhine was small.

He had driven through the western region, which borders Bangladesh, he said. Echoing popular tropes about the Rohingya minority, he said they took advantage of Buddhist women.

Blaming them for their own plight, he said: “There were too many cruel things they did. Mother Suu is suffering now in the international court.”

(This story corrects Wednesday to Thursday in paragraph six)