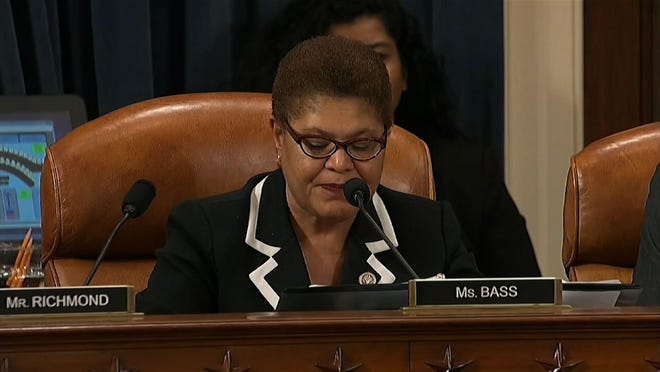 WASHINGTON – The House Judiciary Committee is set to vote on impeachment articles following a marathon debate that went late into Thursday evening.

The committee will resume debate at 10 a.m. EST Friday and will hold two votes – one on President Donald Trump’s alleged abuse of power and the other on the obstruction of Congress during the impeachment inquiry.

Democrats allege Trump pressured Ukraine to investigate former Vice President Joe Biden in exchange for military aid and a White House meeting. Trump, they said, then stonewalled the investigation he called a partisan “witch hunt,” which led to the charge of obstruction of Congress.

Trump became only the fourth president to have the committee recommend articles of impeachment against him. Former Presidents Andrew Johnson in 1868 and Bill Clinton in 1998 were impeached, but not removed from office. Nixon resigned in 1974 after the committee approved articles against him, but before he was impeached.

If the Committee votes to approve the articles of impeachment, they will go for a full vote in the House of Representatives. That vote could come as early as next week.

If the House passes the articles of impeachment, the Senate could hold a trial in early 2020 to decide whether Trump should be removed from office. If two-thirds of the Senate, or 67 senators, vote to convict, Trump would be removed and Vice President Mike Pence would take over as commander in chief.

However, Senate Majority Leader Mitch McConnell, R-Ky., said Thursday evening he already expects a Senate trial to result in an acquittal for Trump.

“There is no chance the president is going to be removed from office,” McConnell told Fox News’ Sean Hannity, adding that he thought it was unlikely any Republican senators would vote for impeachment.

Continue to follow along with updates as they develop.