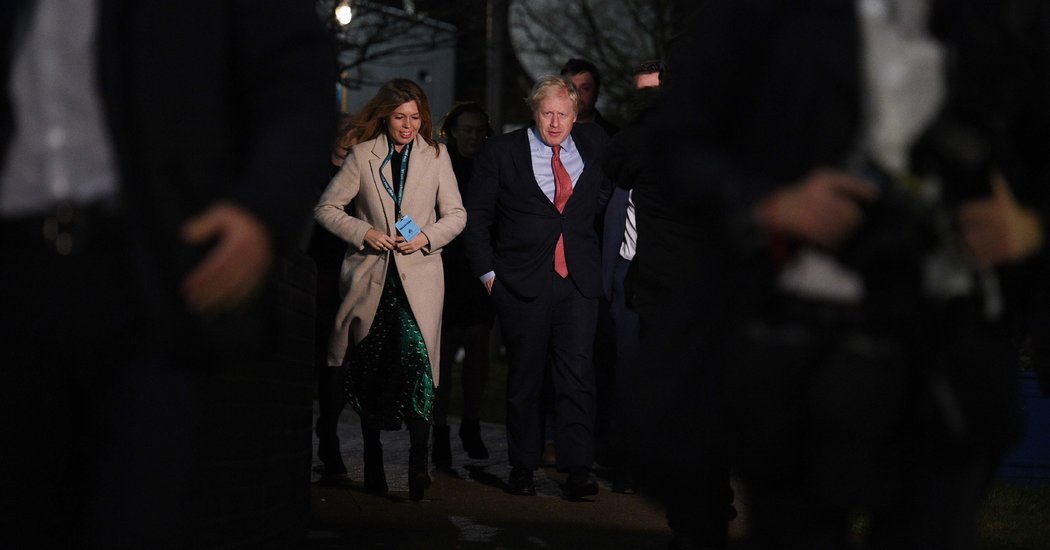 LONDON — Prime Minister Boris Johnson and his Conservative Party won a commanding majority in the British Parliament, a striking victory that redraws the lines in British politics and paves the way for the country’s exit from the European Union early next year.

The Conservatives were projected to win 363 seats in the House of Commons, versus 203 for the Labour Party, according to the BBC, with almost all of Parliament’s seats decided. That would give the Conservatives about a 75-seat majority, their largest since that amassed by Margaret Thatcher in 1987.

As the results flowed in from individual districts, they pointed to a radical reconfiguration of Britain’s political map. The Conservative Party was winning dozens of Labour seats in the industrial north and Midlands, shattering the so-called red wall that has undergirded the Labour Party for generations.

For Mr. Johnson, whose brief tenure has been marked by serial defeats in Parliament, legal reversals and ceaseless upheaval, it was a resounding vindication. Defying predictions that he would be tossed out of his job, the prime minister is now assured of leading Britain through its most momentous transition since World War II.

For Britain, which has lurched from crisis to crisis since the 2016 Brexit referendum, its future seemingly shrouded in perpetual uncertainty, the election provided a rare moment of piercing clarity.

“It’s a remarkable victory,” said Tony Travers, a professor of politics at the London School of Economics. “Boris Johnson now has five years in power. Brexit will happen. Labour faces an existential question about its future — yet again.”

As news of the Conservative victory began to circulate, the pound surged in trading against the dollar and euro, reflecting relief that British politics is likely to stabilize and Britain is more likely to have an orderly departure from the European Union.

While the pre-election polls had been predicting a Conservative victory, the news for the party on Thursday was even better than had been forecast, with the Tories projected to gain about 50 seats, in excess of most projections. The Labour Party was set to lose about 70 seats, its worst showing since 1983, and one that seemed likely to lead to the resignation of the party’s leader, Jeremy Corbyn.

The results, with their seismic shift in the parliamentary power balance, indicated that Mr. Johnson had won his bet that by calling another general election and throwing the question of Brexit back to the British public, he could break the stalemate in Parliament and win a mandate for his policy of a swift withdrawal from the European Union.

There were, however, some red flags for Mr. Johnson, who will lead a Britain still deeply divided over Brexit. The Conservatives were tracking to win about 43 percent of the total vote.

The Scottish National Party was projected to win 49 of Scotland’s 59 seats, gaining more than a dozen seats. The party has stridently opposed Mr. Johnson’s drive for a swift Brexit, and its powerful performance could renew calls for a referendum on Scottish independence, which the prime minister opposes.

The Conservative Party’s gains among working-class voters in the Midlands and the north could also affect Mr. Johnson’s freedom to negotiate a trade agreement with the European Union. Those voters will push for a revival of Britain’s manufacturing economy and protection from imports, a vision that is at odds with the free-market, deregulatory ethos of Mr. Johnson and his aides.

One of Mr. Johnson’s top aides, Priti Patel, the home secretary, said Thursday evening that the new government would introduce legislation to complete Brexit before Christmas, a lightning fast schedule. But Britain’s departure would still not be likely to happen before Jan. 31, the date agreed upon with the European Union.

Many in Britain grumbled about having to go to the polls again so soon, especially in the weeks leading up to Christmas, when the weather is cold and the days are short.

But the stakes this time could not have been higher. Unlike the 2017 vote, this election clarified Britain’s immediate future for the first time since a narrow majority voted to leave the European Union in 2016.

Mr. Johnson’s victory extinguishes the possibility of Britain’s reversing that decision, a dream that has been nurtured by millions who believe that the referendum was a catastrophic error and should be rerun. Polls show a slim majority of people would now favor remaining in Europe, though campaigns for a second referendum have consistently fallen short in Parliament.

For the Labour Party, which had lagged the Conservatives in the polls throughout the campaign but seemed to be narrowing the gap in the past few days, it was a devastating defeat. The party struggled to shift the focus during the campaign from Brexit to social issues like health care, which play more to its benefit.

One of the most senior Labor Party officials, John McDonnell, acknowledged that Brexit had dominated the campaign, keeping his party on the defensive.

Labour had promised to negotiate its own withdrawal agreement with Brussels and then put that to a popular vote. That message was less straightforward than Mr. Johnson’s rallying cry of “Get Brexit Done.”

Neither Labour’s stance on Brexit nor its hard left manifesto of nationalization, tax increases on the rich and huge public spending increases resonated with an electorate that appeared above all to to be ready to turn the page, even if the post-Brexit future is a minefield of uncertainties.

Adding to Labour’s problems was the deep personal unpopularity of Mr. Corbyn, who could never recapture the cheerful aura that seemed to surround him in 2017. Nor could he respond effectively to accusations of deep-rooted anti-Semitism in the party.

Early Friday morning, Mr. Corbyn said he would not lead the Labour Party in “any future general election campaign,” acknowledging the “very disappointing” defeat. But he said he would stay on as leader for the time being.

Other smaller parties suffered as well, particularly the Liberal Democrats, which campaigned to reverse the results of the Brexit referendum. The party was projected to win only a single seat over what they won in 2017, and would see its total number of seats, which had grown because of defections from other parties, reduced by eight. The party’s leader, Jo Swinson, lost her seat.

It is difficult to overstate the shift in Mr. Johnson’s fortunes from a year ago, when he was briefly a back bencher. As a fledgling prime minister in September, he had faced a mutiny from nearly two dozen members of his own party over his threat to leave the European Union without a deal. Britain’s Supreme Court ruled that his decision to suspend the Parliament for five weeks — to squelch its ability to debate his Brexit policy — was illegal.

He purged the party dissidents and has largely recast the Conservatives as a band of hard-line Brexiteers.

In the campaign, Mr. Johnson stuck to a disciplined strategy, forswearing the clownishness that has characterized his political career. He avoided scrutiny from the news media, declined to be drawn into debates about issues aside from Brexit and conducted his campaign largely on photo opportunities — like when he drove a backhoe through a Styrofoam wall emblazoned with the word, “Gridlock.”

Every single Conservative candidate signed a pledge to support Mr. Johnson’s withdrawal agreement, guaranteeing that if his party won even a one-seat majority, Britain would depart the bloc under the terms of that deal.

Early Friday, Mr. Johnson said that his government had received “a powerful new mandate to get Brexit done.”

Once Parliament gives its approval to the withdrawal deal, Mr. Johnson’s first order of business will be to negotiate a trade agreement with the European Union, a task that many experts predict will be arduous and all but impossible to complete before Britain’s next deadline, Dec. 31, 2020.

That sets up another potential battle over extending the deadline — something that Mr. Johnson has sworn not to do — or leaving with no deal.