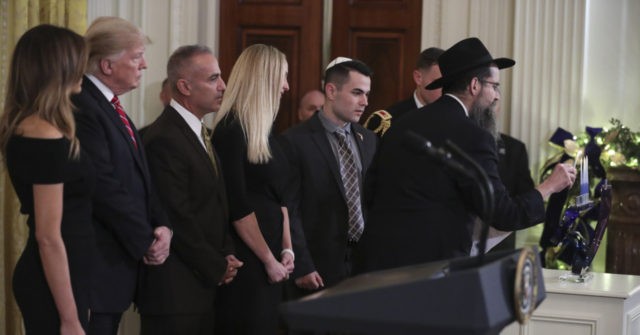 President Donald Trump hosted a Hanukkah celebration at the White House on Wednesday, condemning another antisemitic attack in the United States.

The president condemned the shooting attack Tuesday in a Kosher market in Jersey City, New Jersey.

“With one heart America weeps for the lives lost, with one voice we vow to crush the monstrous evil of antisemitism whenever and wherever it appears,” Trump said.

One of the suspects was linked to the Black Hebrew Israelites, a hate group, according to reports.

The president also welcomed Army Veteran Oscar Stewart and Border Patrol Agent Jonathan Morales to the event, thanking them for their heroic actions to stop a mass shooting at a synagogue in California in April.

Stewart spoke at the event, choking up while recalling scripture and thanking the president for his actions to protect people of faith:

America is a nation of many, many, people and we need to remember, whatever God that you pray to, whatever religion you practice, we are all Americans and we need to love each other and we will conquer hate.

“In honor of Rosalee and the millions of Jews who suffered unthinkable persecution, we renew our pledge now and always, ‘Never again.’”

Trump also invited a 12-year-old boy, Austin Polanski from San Francisco, who wrote him a letter about the meaning of Hanukkah.

Trump signed an executive order at the reception extending Title VI protections of the Civil Rights Act of 1964 to cover Jewish students on college campuses. He said:

This is our message to universities, if you want to accept the tremendous federal dollars that you get every year, you must reject anti-Semitism, it’s very simple. My administration will never tolerate the suppression or persecution or silencing of the Jewish people.

The president signed the document and presented several pens from the ceremony to those gathered for the event.

Dershowitz hailed the signing of the executive order as one of the most significant moments in history in the ongoing fight against antisemitism:

It is a game-changer, it will go down in history as one of the most important events in the 2000-year battle against antisemitism. You will be remembered by history for all time for having signed this very important order.

The crowd shouted “Four more years!” as the president left the event.