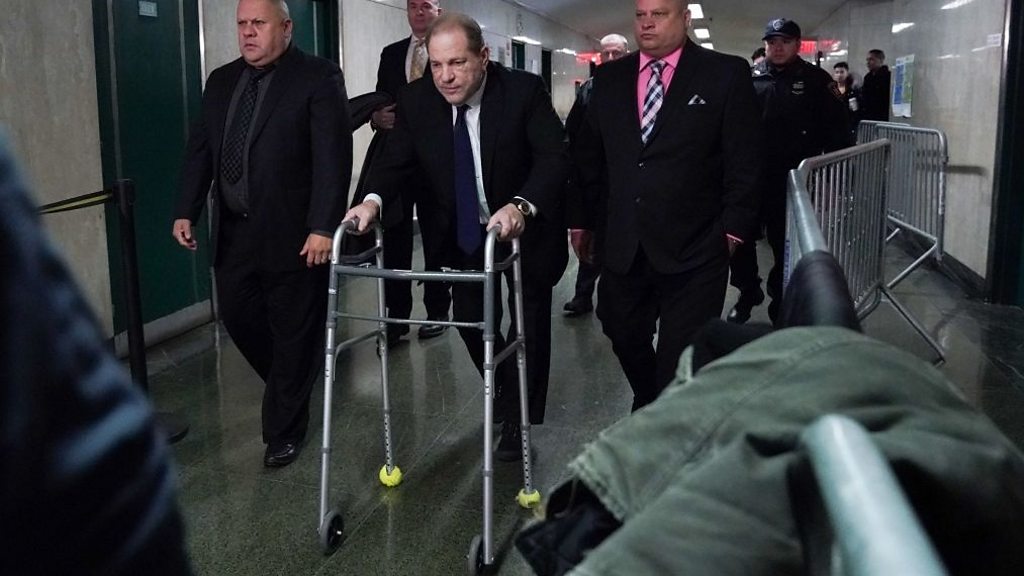 Film mogul Harvey Weinstein has reached a tentative $25m (£19m) settlement with dozens of women who have accused him of sexual misconduct, lawyers have said.

Some 30 actresses and ex-employees would share the payout in the deal.

However, it still needs signing off by all parties, Mr Weinstein’s lawyers have not commented and some say the deal will punish those holding out.

Mr Weinstein faces a separate criminal trial next month on rape and sexual assault charges, which he denies.

The Hollywood producer could face life in jail if convicted.

On Wednesday, Mr Weinstein’s bail sum was raised from $1m to $5m for the alleged mishandling of an electronic ankle monitor.

He attended the court hearing in New York using a walking frame. His lawyers said he was undergoing surgery on Thursday for injuries suffered in a car accident in August.

What is in the agreement?

It is important to stress it is still not final. Details of the deal were initially carried in the New York Times, but lawyers have confirmed most of them with other US media outlets.

The newspaper said the agreement had obtained preliminary approval from most of the parties involved.

The main elements appear to be:

Lawyers for Mr Weinstein and The Weinstein Company contacted by the New York Times and other media outlets have declined to comment.

A group lawsuit had been brought by dozens of women who accuse Mr Weinstein of sexual harassment and abuse, though high-profile figures who have also made allegations, such as Gwyneth Paltrow and Angelina Jolie, are not part of the action.

It has certainly been mixed.

Genie Harrison, a lawyer for one of the plaintiffs, told the New York Times: “I don’t think there’s a markedly better deal to be made.”

She said other alleged victims who hold out could end up with nothing, and that they should “come forward and be able to get the best level of compensation we were able to get”.

One plaintiff backing the deal, Louisette Geiss, told Associated Press (AP) news agency: “This settlement will ensure that all survivors have the chance for recovery and can move forward without Harvey’s damaging lock on their careers.”

But Zoe Brock, an actor and model involved in the case, told the BBC: “I think the settlement is a joke and it signifies an absolutely broken system. I’m devastated by it, I’m appalled by it.”

Some lawyers for plaintiffs were also unhappy with the terms.

Douglas Wigdor told the BBC: “We reject the notion that this was the best settlement that could have been achieved.”

He said it was “outrageous that the proposed settlement will seek to bind non-participating members by providing a release to the insurance companies and the directors of the Weinstein Company itself”.

Anti-sexual harassment campaign group Time’s Up tweeted: “If this is the best the survivors could get, the system is broken.”

What will Mr Weinstein face trial for?

Mr Weinstein’s criminal trial is set to begin on 6 January in Manhattan.

He is accused of raping a woman in a hotel room in the New York borough in 2013, and of performing a forcible sex act on a second woman in 2006.

He denies the charges.

He also pleaded not guilty in August to two additional charges of predatory sexual assault over an alleged rape in 1993, although these cannot be prosecuted because of time limits.

The 67-year-old has denied sexual misconduct allegations by more than 70 women.

The accusations came after the New York Times published a story in October 2017 detailing decades of allegations. Actresses Rose McGowan and Ashley Judd were among the women who came forward.