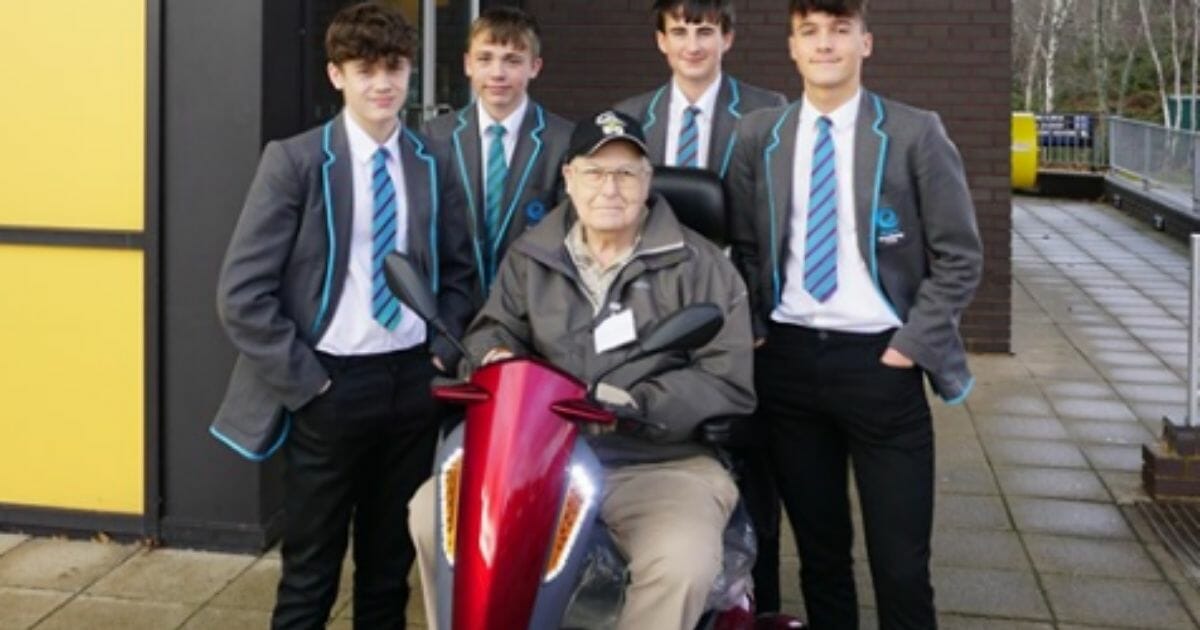 Many times, when you see a gaggle of teens hanging out, you can’t help but wonder what shenanigans they’re up to. It’s sad that so many automatically assume the worst, but it’s not without reason.

Many teens have too much creativity and energy and too little guidance, and end up putting their efforts into exercises that don’t exactly benefit a community. But that’s certainly not true of these four young men from England.

Jack Murphy, Harley Donworth-Kent, Finlay Hamilton and Kaden Rocha (all 14) had finished up for the day at Magna Academy when they spotted an elderly gentleman on a red scooter — but he appeared to be in a predicament.

“We could see he was struggling and it was important to check to make sure he was OK,” Rocha told the Bournemouth Daily Echo. “We dropped him off home and made sure he got inside OK.”

That makes it seem like it was a simple endeavor, but there was quite a bit of effort involved, as the boys ended up pushing the scooter — with 90-year-old Alan Stanyon in it — for about a mile.

“He was just so happy that we had come over to help,” Murphy said. “He said that the battery in his electric scooter had died. It took us about half an hour to push him home.”

“Four lads from the school saw me pushing it and came along and pushed it for me all the way home,” Stanyon said. “I was struggling and they offered to help and I was willing to let them. They even pushed it with me on it.”

Once they got to Stanyon’s residence, the gentleman tried to pay the boys for their assistance, but they refused.

“I offered them all a fiver but they didn’t accept,” he said.

It seemed it was enough for the teens to help him out, and that was rewarding enough in itself.

“It was the right thing to do to help him,” Rocha explained. “If you see someone that needs help, it’s a natural thing to do.”

“It is great to hear from our local community about Magna pupils helping those in need,” Potter said.

“It is especially uplifting for our pupils to be recognized for such acts of kindness, we are very proud of them.”

The school has been keeping up with the coverage of the story, sharing when new articles come out and encouraging others to follow these four young men’s example.

“These boys made the nationals! Epic,” the school posted Wednesday.

“Their kindness is getting such coverage. We are so proud of them.”