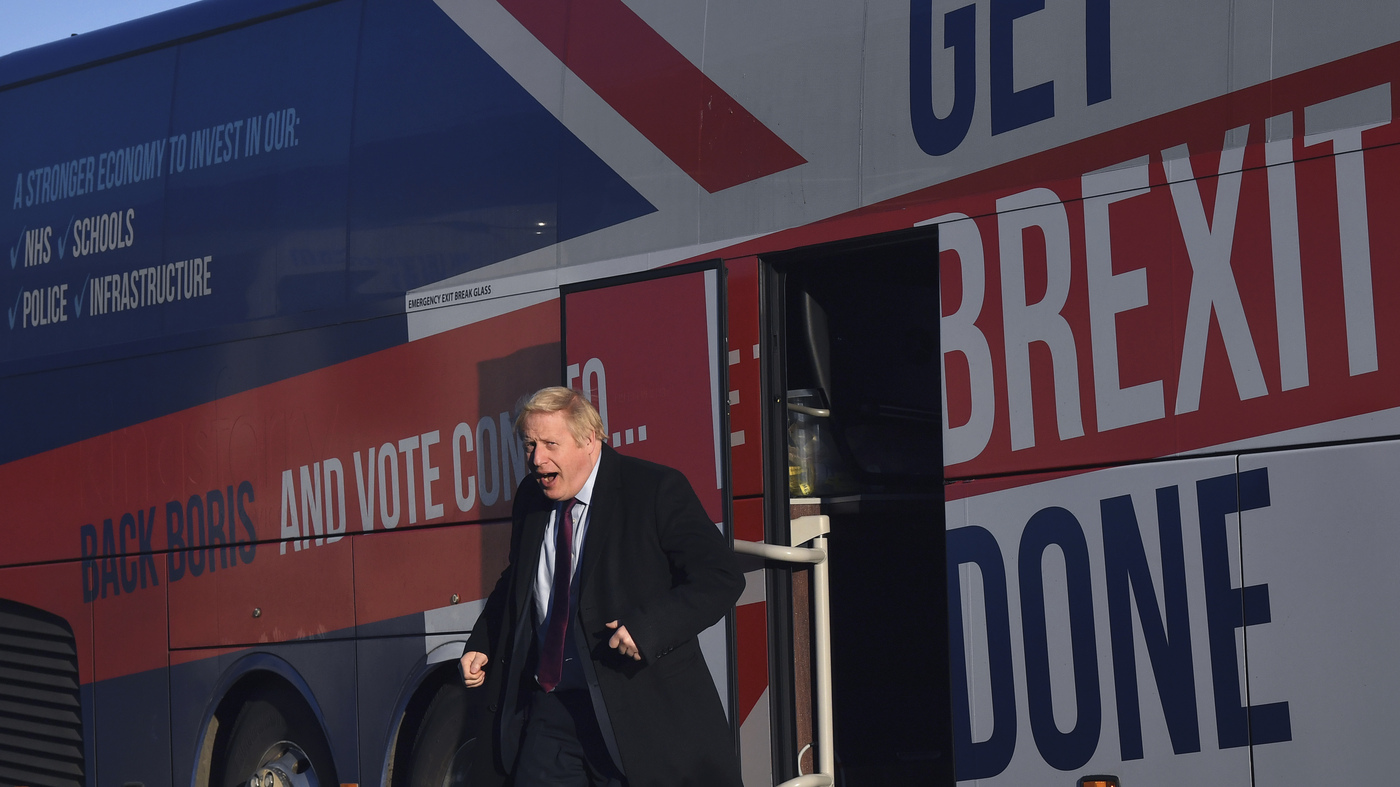 Britain’s Prime Minister Boris Johnson gets off his election campaign bus — emblazoned with the slogan “Get Brexit Done” — to visit Ferguson’s Transport in Washington, England, on Monday. Britain goes to the polls on Dec. 12. 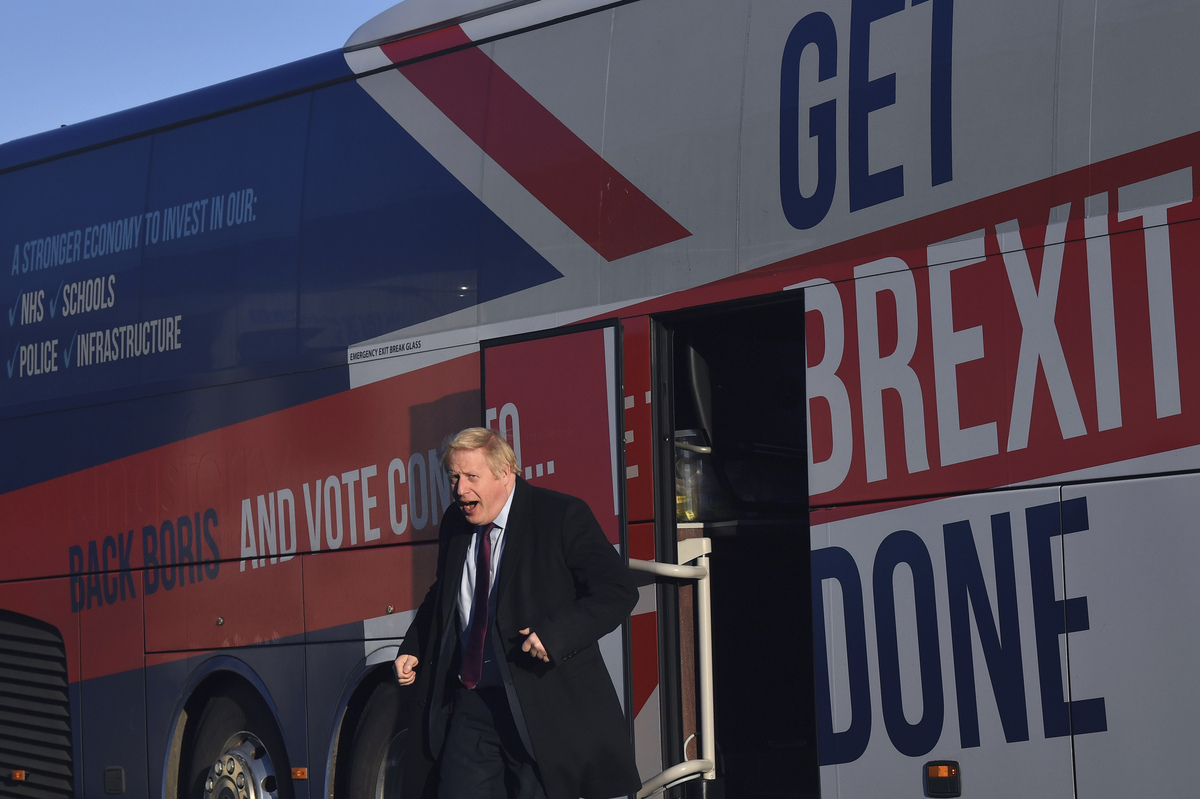 Britain’s Prime Minister Boris Johnson gets off his election campaign bus — emblazoned with the slogan “Get Brexit Done” — to visit Ferguson’s Transport in Washington, England, on Monday. Britain goes to the polls on Dec. 12.

Voters in the United Kingdom head to the polls Thursday for a crucial election that could determine the country’s future and how and when it will break off of the European Union.

This will be the fifth major vote in the country in under five years — including two previous general elections, European Parliament elections and the Brexit referendum — a sign of how chaotic British politics have become.

The stakes are high, voters are weary and the two main candidates for prime minister are especially polarizing.

Here are some key details to understand before Thursday’s vote.

Why is the U.K. having yet another election?

Because after more than three years, the government hasn’t resolved Brexit, its biggest challenge in decades. This all started in 2016 when voters stunned the world and voted to leave the EU. The Brexit vote split the nation and paralyzed Parliament. After becoming prime minister this summer, Boris Johnson tried and failed to pass his Brexit withdrawal agreement. So he called a snap election to try to win a majority in Parliament to get his Brexit deal through. Johnson’s predecessor, Theresa May, who had also called an early election, tried to get her withdrawal deal approved three times this year, but failed. If he can win parliamentary approval, Johnson hopes to take the U.K. out of the EU by the end of January.

What is the biggest issue and where do the parties stand?

The answer, as always, is Brexit. Johnson is running on the slogan “Get Brexit Done.” He argues that only his Conservative Party, which engineered the Brexit referendum in 2016, can deliver on what he calls the will of the people. 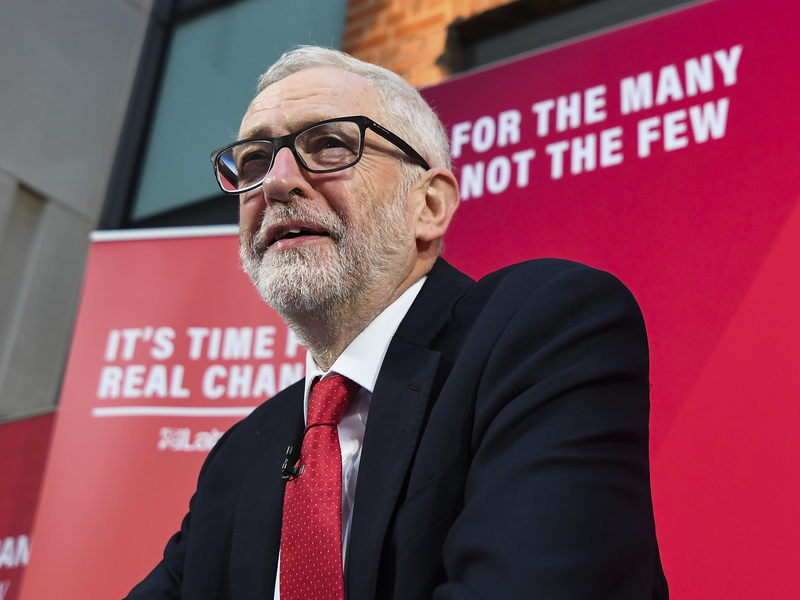 Britain’s Labour Party leader Jeremy Corbyn speaks during a news conference in London, on Dec. 6, ahead of the general election. 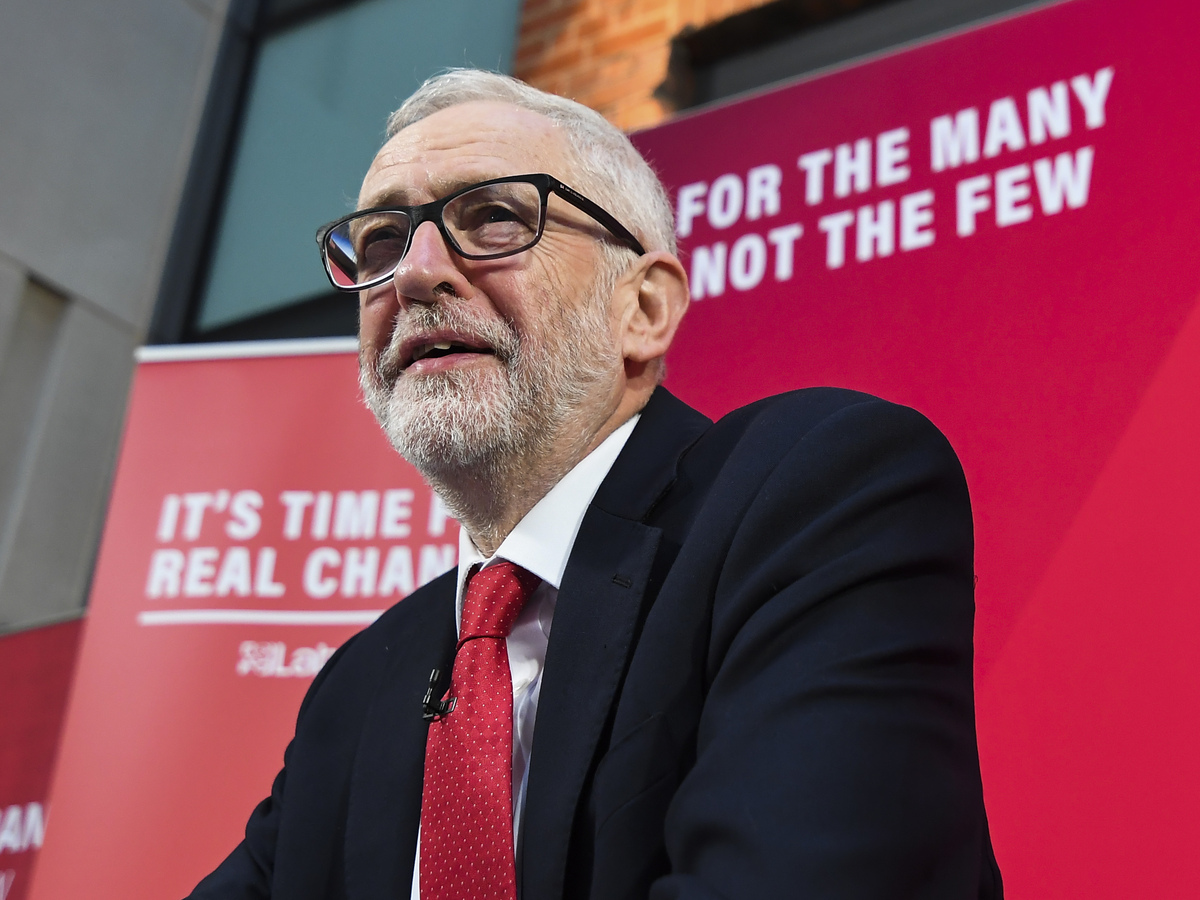 Britain’s Labour Party leader Jeremy Corbyn speaks during a news conference in London, on Dec. 6, ahead of the general election.

Jeremy Corbyn, leader of the opposition Labour Party, the second largest in Parliament, has refused to take a side on Brexit. Corbyn says he will renegotiate a withdrawal agreement with the EU and then hold another referendum where Britons can vote for his deal or to stay in the EU.

The Liberal Democrats, the fourth-largest party in Parliament, are running on a platform to stop Brexit and keep the country in the EU.

The third-largest party, the Scottish National Party, strongly opposes Brexit as well (more on Scotland below).

Are the candidates talking about other issues?

Yes. One big issue is revitalizing the National Health Service, which provides free health care. Britons are very proud of the NHS, but it suffers from low morale, underfunding and staff shortages. Corbyn points out that the decline of the health service has occurred during nearly a decade of Conservative rule.

In addition to that, both the Conservatives and Labour want to end the government’s austerity policy. In the wake of the global financial crisis a decade ago, the central government slashed funding and many local communities suffered. Anger toward those cuts helped fuel the Brexit vote, which in many respects was a protest against the political establishment in London.

Who is running for prime minister?

Johnson’s critics see him as political animal who habitually lies. During the Brexit campaign, Johnson rode in a campaign bus with a sign claiming that if the U.K. left the EU it would have the equivalent of an additional $460 million a week to spend on public health care, which wasn’t true.

Earlier in his career, Johnson lost two jobs for lying. The Conservative Party fired him as vice chairman in 2004 after he lied about an affair and The Times of London fired him in 1988 when he was a journalist for making up a quote.

There are other problems. The U.K.’s chief rabbi has accused Corbyn of failing to address anti-Semitism, writing in The Times last month that a “new poison — sanctioned from the top — has taken root in the Labour Party.”

Jewish leaders say Corbyn was slow to punish party members for posting anti-Semitic comments on-line. Earlier this month, Corbyn told ITV, “obviously, I’m very sorry for everything that’s happened, but I want to make this clear, I’m dealing with it.” 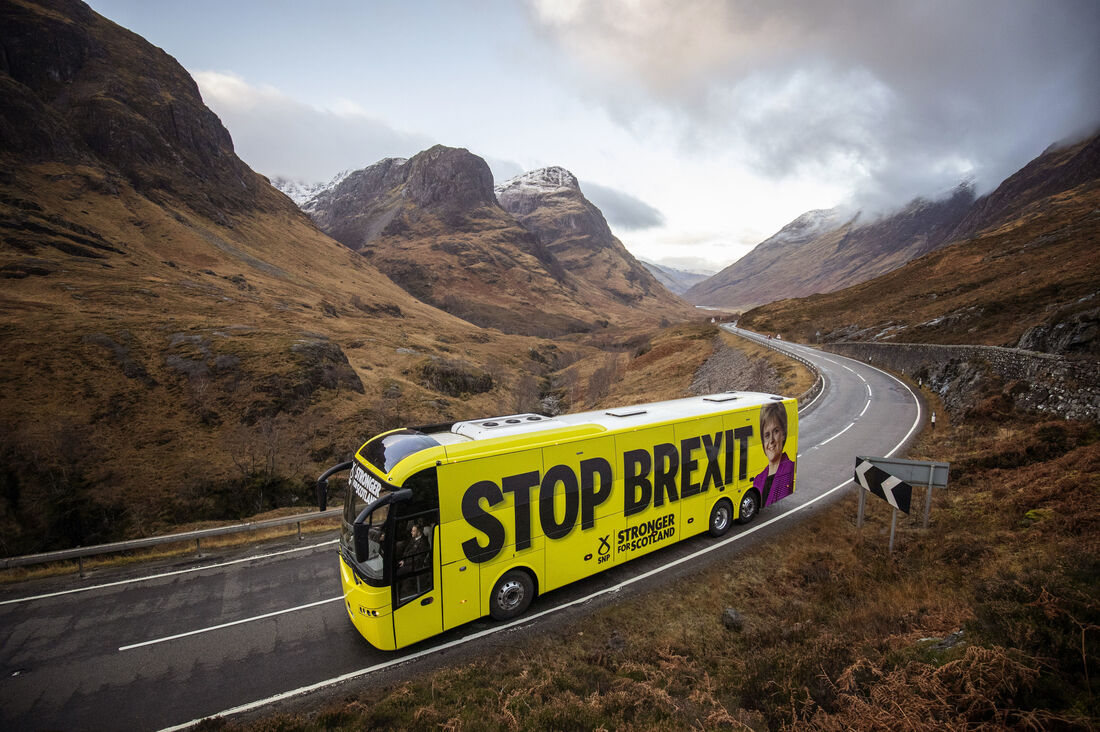 A Scottish National Party campaign bus — emblazoned with the slogans “Stop Brexit” and “Stronger for Scotland” — travels along the Pass of Glencoe in the Highlands during a tour of Scotland on Monday, in the final week leading up to the general election. 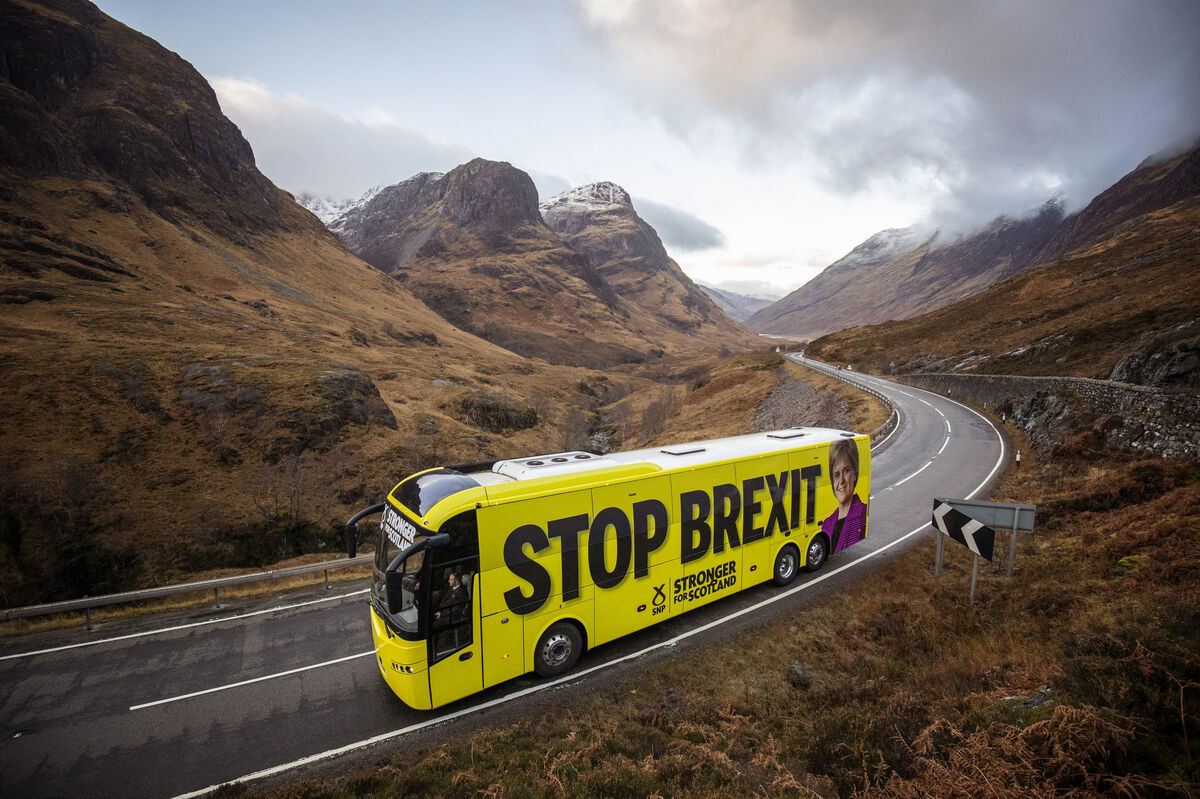 A Scottish National Party campaign bus — emblazoned with the slogans “Stop Brexit” and “Stronger for Scotland” — travels along the Pass of Glencoe in the Highlands during a tour of Scotland on Monday, in the final week leading up to the general election.

Where does Scotland figure in this election?

Nicola Sturgeon, leader of the Scottish National Party is urging voters to back her party so it can push for a second referendum on Scottish independence. Scotland voted against Brexit and Sturgeon argues that Scotland is better off outside the U.K. and inside the EU.

“A Boris Johnson government taking Scotland out of the European Union against our will with all of the damage that will do is a real and present danger to Scotland’s future prosperity,” she said at a recent campaign event in Glasgow.

Political analysts say any push for Scottish independence has a ways to go. In the 2014 referendum, independence was defeated by 10 percentage points. Boris Johnson has said he won’t support a second referendum. An Ipsos Mori poll last month found voters in Scotland evenly split on the issue.

What stakes does the U.S. have in this election, if any?

President Trump is an ardent Brexit supporter. He doesn’t like multilateral institutions such as the EU and thinks the U.S. does much better in one-on-one trade negotiations where it has more leverage with individual countries. The Johnson government is eager to strike a new free-trade deal with the U.S.

Trump has said kind things about Johnson, who, like the American president, is a populist politician who says things the left and minorities often find offensive. In the past, Trump, who is very unpopular in the U.K., has opined on British elections. When he was here last week for the NATO summit, he was much more circumspect after Johnson publicly asked him not to intervene.

The U.K. is a staunch ally of the U.S. It is in America’s interest that British politics stabilize after 3 1/2 years of upheaval.

Johnson’s Conservative Party is leading by about 10 percentage points in recent polls.

This is striking considering the Conservatives pushed for the Brexit vote and have presided over the ensuing chaos.

That said, Johnson has a clear election message that is resonating not only with Brexit voters, but also with some who voted to stay in the EU and have become exhausted with the process and want it to end.

The Conservatives have 298 seats in the House of Commons and need to pick up another 28 on Thursday to win a majority. Given the polls and dynamics of the race, most analysts expect a solid Conservative victory.

However, the British electorate is volatile and unpredictable after more than three years of Brexit strife and the results of the 2016 Brexit referendum and the 2017 general election were both surprises.