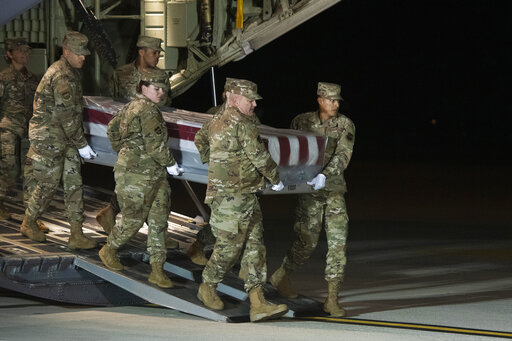 The shooting at Naval Air Station Pensacola by a Saudi Arabian aviation student put a spotlight on the federal government’s long-standing practice of having foreign nationals train with the United States military.

Ahmed Mohammed al-Shamrani, a Royal Saudi Air force member, killed three sailors and injured eight others Dec. 6 before he was killed by deputies.

Following the attack, a PolitiFact reader messaged us with this question: “Why are we still teaching Saudi Arabia how to fly our planes, especially after what happened with 9/11?”

It’s true that many of the 9/11 hijackers were of Saudi nationality. But the United States still considers Saudi Arabia a regional ally in the fight against terrorism. The U.S. strategy of training foreign militaries is meant to build defense partnerships and to advance U.S. interests.

Long-standing relationship between the United States and Saudi Arabia

Overall, military-to-military cooperation is supposed to allow Saudi Arabia to better defend itself and to help the United States achieve its policy goals in the Middle East. The history of cooperation goes back to the 1940s, including a series of agreements, arms sales, military training and deployments.

The relationship between the United States and Saudi Arabia was built on shared economic interests and an antipathy to communism, said a November Congressional Research Service report.

George W. Bush’s administration in 2005 identified Saudi Arabia as a “key ally” in the global war on terrorism.

“Despite post 9/11 strains, military-to-military relations remain positive, based on decades of cooperation and close consultation, as well as years of U.S. support to Saudi Arabia’s military programs including training, joint exercises, (foreign military sales) and commercial arms sales,” said a 2005 report from the Bush-era State Department.

Partnering with Saudi Arabia in the United States’s International Military Education and Training program “exposes Saudi military personnel to U.S. values, ideas, and policies” and “increases awareness of international norms of human rights, the principle of civilian control of the military, and the rule of law,” the State Department said in 2005.

The Defense and State departments each year report to Congress about all military training provided to foreign military personnel. (The policy does not generally apply to any NATO member, Australia, Japan, or New Zealand.) In 2016, approximately 122,500 students from 155 countries participated in training.

More specifically, the U.S. military hosts more than 5,100 foreign students from 152 countries at military sites around the country, a Pentagon spokesman told PolitiFact. That includes 852 Saudis.

The goal of such programs is to advance U.S. security interests by building defense partnerships.

A few hours after we posted this story, a Pentagon spokesperson told us that the shooter was in the United States for training as part of an Air Force military sale. When countries buy U.S. military equipment, training is often part of the package. (The Pentagon said it does not publicly release that agreement.)

According to the Pensacola News Journal, the base’s partnerships with the Royal Saudi Air Forces include an undergraduate pilot basic aviation preparatory training course, a senior executive leadership course and a junior officer enhanced leadership course.

International military students must undergo local security and medical screening before getting a visa. The security screening (done by U.S. officials in the foreign country) includes a review of databases for evidence of drug trafficking, support of terrorist activity, corruption, criminal conduct, or other activities inconsistent with U.S. policy goals.

Defense Secretary Mark Esper directed a review of vetting procedures within the Defense Department for all foreign nationals who come to the United States to train, he told Fox News after the shooting. Esper did not call for an end to the training programs.

Update: This fact-check has been updated with additional information from the Pentagon and about the Navy grounding Saudis.