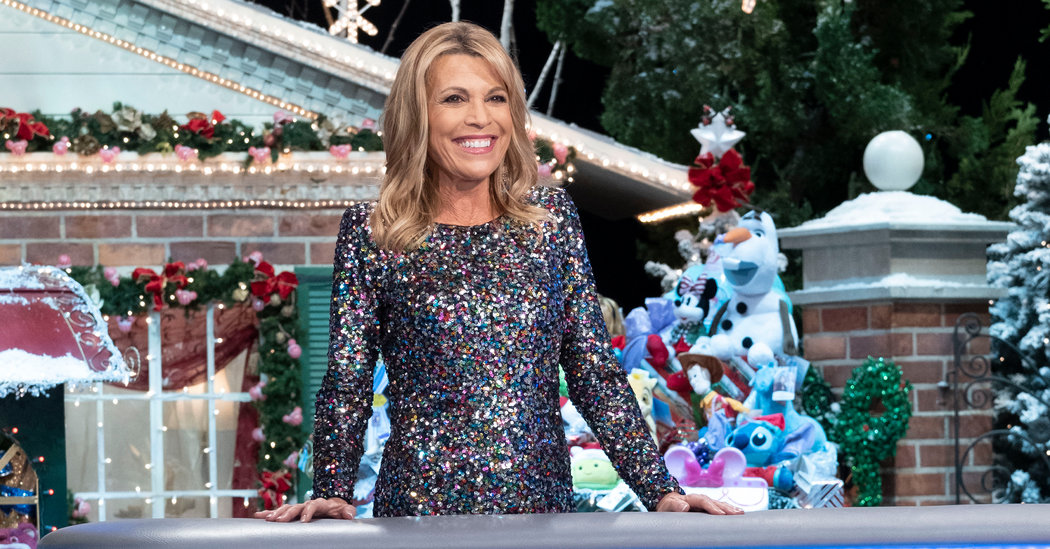 For 37 years, Vanna White has sashayed back and forth across the “Wheel of Fortune” stage, revealing tens of thousands of consonants and vowels and making five-inch heels look easy. (By one estimate, she’s walked more than 2,000 miles on that stage.)

On Monday evening, for the first time, White, 62, stepped away from the big letter board and into the role of host, beginning a three-week stint leading the classic game show — and kicking off her heels while she’s at it.

On Nov. 8, “Wheel of Fortune” producers announced that the longtime host Pat Sajak, 73, had emergency surgery to correct a blocked intestine. Since the show was in the middle of taping, it needed a fill-in while Sajak recuperated. So White, a durable icon of American entertainment but mostly silent during the games, was asked to take the wheel. The request was a surprise to White, to say the least.

“I’ve never even thought of that in 37 years,” White said in an interview last week, “and to be asked almost on the spot, ‘How do you feel about hosting the show?’ Like, what?!”

Did she have any nerves? “Oh, my gosh, that’s an understatement,” she said. “I was very nervous.”

According to the show, Sajak has appeared continuously for more than 35 years, except for April Fools’ Day 1997, when Sajak hosted “Jeopardy!” and Alex Trebek took over “Wheel of Fortune.” (Ardent fans of the show might recall that Sajak and White switched places for one round in 1996 because Sajak had laryngitis, but White has never been in charge for an entire episode).

The show’s basic structure has not changed since White spun her first letter in 1982: contestants spin a large carnival-style wheel for a chance to solve word puzzles for cash and prizes. In 1997, the board went digital, and White’s job changed from turning letters to tapping them awake. And “Wheel of Fortune” has gotten a little more complex over the years, with mini-games within the game, including “crossword rounds” (interwined words linked by a clue) and “triple toss-ups” (one round with three quick puzzles).

White had to manage all of those on top of juggling the host’s core duties of keeping the fast-paced game moving along and paying close attention in case contestants incorrectly make a word plural or add a word to a phrase. These were tasks that White, who had only one dry run before filming, “subconsciously knew but had to be very aware of.”

Monday night’s episode went off without a hitch. And while White wasn’t as at ease as the well-seasoned Sajak — she looked down at her cards during some rounds and occasionally paused to make sure she was reading the correct prize totals — she eventually began to loosen up, and even poked fun at herself.

“That wheel is heavy!” she said after giving the wheel its final spin. And after reading a wrong amount from the wheel, she said: “Oh no, I’m looking at the wrong arrow. How do you do this show?” to which the audience laughed.

When it was clear that the winning contestant, Raychel, was going to correctly solve the final bonus puzzle for a major prize, White said, “I think I’m going to cry.” Raychel won $37,000 for that puzzle, giving her a total of $60,511 for the night.

That episode was the first of a three-week run with White in charge of the wheel. For the first two weeks, Mickey and Minnie Mouse characters will take White’s spot at the board (the show was filming its Disney Week episodes), and the stand-in with the letters for her third week will be a surprise revealed the night the person first appears, White said.

While hosting, she is maintaining her signature look of shimmery evening dresses (she’s never repeated one), though noneare full-length. “I had to walk to the contestants and they were on different platform heights,” she said. “I didn’t want to have a long dress to worry about tripping over.”

As for those heels, White shared a little secret. “Being behind the home base, I didn’t have to wear shoes,” she said. “So I took my shoes off during the show. It was great.”

White, a native of Myrtle Beach, S.C., moved to Los Angeles in her early 20s with aspirations of becoming a model and only $1,000 to her name. Her spokeswoman looks and radiant smile helped cement her as a household name — landing her on many magazine covers and even in rap lyrics over the years. She holds the Guinness world record as “television’s most frequent clapper,” and in the run-up to the 1996 Summer Olympics in Atlanta, she and Sajak carried an Olympic torch.

Despite White’s being synonymous with “Wheel of Fortune,” before now she has not said much on air apart from banter with Sajak at the end of each episode. In fact, women aren’t heard much at all as game-show hosts. Over the years, only a few have broken through, and often the shows haven’t lasted long.

Betty White won an Emmy for hosting the ironically titled “Just Men!” in 1983, but it ran just three months. Anne Robinson, who hosted the British version of “The Weakest Link” from 2000 to 2012, hosted an American version on NBC, but only for a year, from 2001 to 2002.

Meredith Vieira had better luck when she took over “Who Wants to Be a Millionaire” from Regis Philbin in 2002; she hosted until 2013. And the third season of Ellen DeGeneres’s “Ellen’s Game of Games” is set to air in January.

Even though “you don’t see a lot of it,” Vanna White said she doesn’t see any reason more women shouldn’t be leading such shows. “Everybody’s entitled to host the show: female, male, everyone.”

“It would be fun to see more women up there doing that,” she went on. “If that’s what they want to do.”