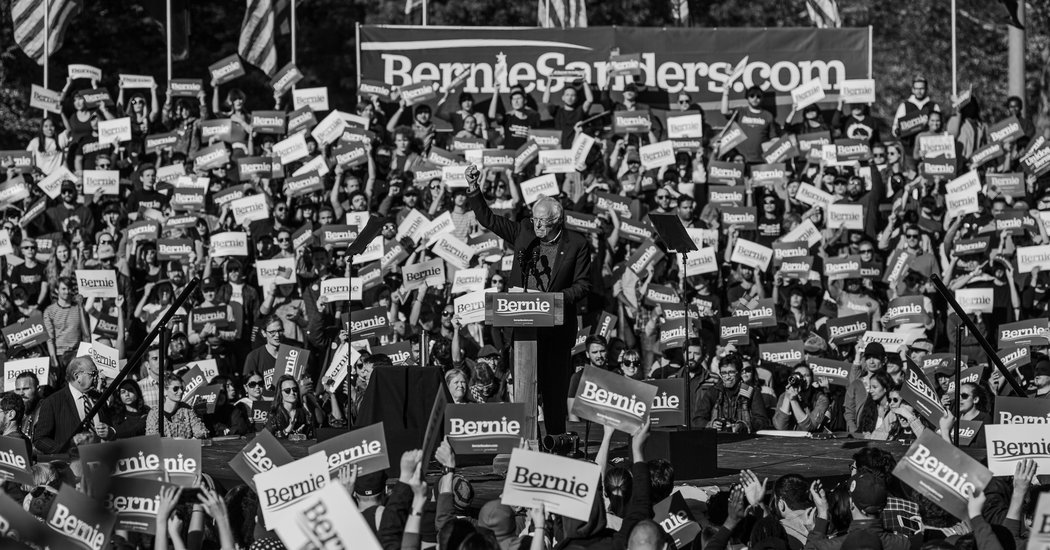 As the Democratic primary elections get closer, the party leadership has begun to fret in public about universal health care and other ambitious proposals. Even former President Barack Obama tried to assuage donors’ fears in November when he said that the “average American” doesn’t think we need to “tear down the system and remake it.” His comment captured the essence of tensions that have roiled the party for months. Party elites believe focusing squarely on President Trump’s record will end his presidency, while others counter that the Democrats also have to champion bold policies.

The surprising resilience of the campaign of Senator Bernie Sanders of Vermont vindicates the latter approach. Mr. Sanders’s improbable rise to Democratic front-runner began in 2015 when he organized his campaign for president around a redistributive agenda of universal health care and free college, along with a number of other progressive reforms. Party insiders dismissed this as fanciful and out of touch, but Mr. Sanders aggressively challenged Hillary Clinton for the nomination while picking up 13 million votes.

Mr. Sanders has not diluted his message since then, but has instead recommitted to his promises of “big government” socialist reforms — all the while pulling other candidates to his side. Although Mr. Sanders grows in popularity, neither the Democratic Party establishment nor the mainstream media really understand his campaign. That’s because it disregards conventional wisdom in politics today — tax cuts for the elite and corporations and public-private partnerships to finance health care, education, housing and other public services.

After months of predictions of its premature end, Bernie Sanders’s improbable run continues its forward movement. In October, pundits and other election experts suggested that perhaps Mr. Sanders should leave the race and throw his support to Senator Elizabeth Warren of Massachusetts, in the wake of her rising poll numbers and his heart attack. But doubts quickly gave way to excitement when Mr. Sanders captured the coveted endorsement of Representative Ilhan Omar of Minnesota. She was soon joined by Representatives Alexandria Ocasio-Cortez of New York and Rashida Tlaib of Michigan.

The spirited endorsements of three-quarters of the so-called squad illustrates how Mr. Sanders’s campaign has grown from 2016 when it was criticized for being too white, too male and for underestimating the salience of race and gender oppression. Some of that criticism was overstated. Indeed Mr. Sanders won 52 percent of the black millennial vote in 2016 and was supported by Black Lives Matter activists like Erica Garner, who passed away in 2017. But Mr. Sanders took the criticisms seriously anyway.

Much of the media, though, has been stuck in 2016 and has missed the ways that the Sanders campaign has transformed into a tribune of the oppressed and marginalized. We can also measure this change in the endorsement of Philip Agnew, the former head of the Florida-based Dream Defenders and a leader in the Black Lives Matter movement who has become a campaign surrogate. As well as the endorsement of the Center for Popular Democracy Action on Tuesday, a powerful coalition of more than 40 progressive community groups which will now rally their 600,000 members across the country to organize voters in support of Mr. Sanders. These developments defy the caricature of his campaign as impossibly sexist and implicitly racist.

Instead, Mr. Sanders has reached the typically invisible, downwardly mobile working class with his language of “class warfare.” He has tapped into the anger and bitterness coursing through the lives of regular people who have found it increasingly impossible to make ends meet in this grossly unequal society. Without cynicism or the typical racist explanations that blame African-Americans and Latino immigrants for their own financial hardship, Mr. Sanders blames capitalism. His demands for a redistribution of wealth from the top to the rest of society and universal, government-backed programs have resonated with the forgotten residents of the country.

Since Mr. Trump’s election, “class,” when it’s discussed at all, has been invoked for its hazy power to chart Mr. Trump’s rise and potential fall. Recall the endless analyses of poor and working-class white voters shortly after his election and the few examinations of poor and working-class people of color. But the Sanders campaign has become a powerful platform to amplify the experiences of this multiracial contingent.

Under normal circumstances, the multiracial working class is invisible. This has meant its support for Mr. Sanders’s candidacy has been hard to register in the mainstream coverage of the Democratic race. But these voters are crucial to understanding the resilience of the Sanders campaign, which has been fueled by small dollar donations from more than one million people, a feat none of his opponents has matched. Remarkably, he also has at least 130,000 recurring donors, some of whom make monthly contributions.

Adding to that, Mr. Sanders is the top recipient for donations by teachers, farmers, servers, social workers, retail workers, construction workers, truckers, nurses and drivers as of September. He claims that his donors’ most common employers are Starbucks, Amazon and Walmart, and the most common profession is teaching. Mr. Sanders is also the leading recipient of donations from Latinos as well as the most popular Democrat among registered Latinos who plan to vote in the Nevada and California primaries. According to Essence magazine, Mr. Sanders is the favorite candidate among black women aged 18 to 34. Only 49 percent of his supporters are white, compared with 71 percent of Warren supporters. Perhaps most surprising, more women under 45 support him than men under 45.

Mr. Sanders’s popularity among these voters may be what alienates him within the political establishment and mainstream media. The leadership of the Democratic Party regularly preaches that moderation and pragmatism can appeal to “centrist” Democrats as well as Republicans skeptical of Mr. Trump. It is remarkable that this strategy still has legs after its spectacular failure for Hillary Clinton in 2016.

Mrs. Clinton’s rejoinder to Mr. Trump that “America never stopped being great” was tone deaf to millions of ordinary Americans struggling with debt, police brutality and pervasive inequality. Simply focusing on the boorishness of Mr. Trump or offering watered-down versions of what has made Mr. Sanders a household name will not motivate those who do not typically vote or angry voters who recoil at the cynicism of calculating politicians.

In many respects, Bernie Sanders’s standing in the Democratic Party field is shocking. After all, the United States government spent more than half of the 20th century locked in a Cold War against Soviet Communism. That an open and proud socialist is tied with Ms. Warren for second place in the race speaks to the mounting failures of free market capitalism to produce a decent life for a growing number of people. There was a time in America when being called a socialist could end a political career, but Bernie Sanders may ride that label all the way to the White House.

This essay has been updated to reflect news developments.