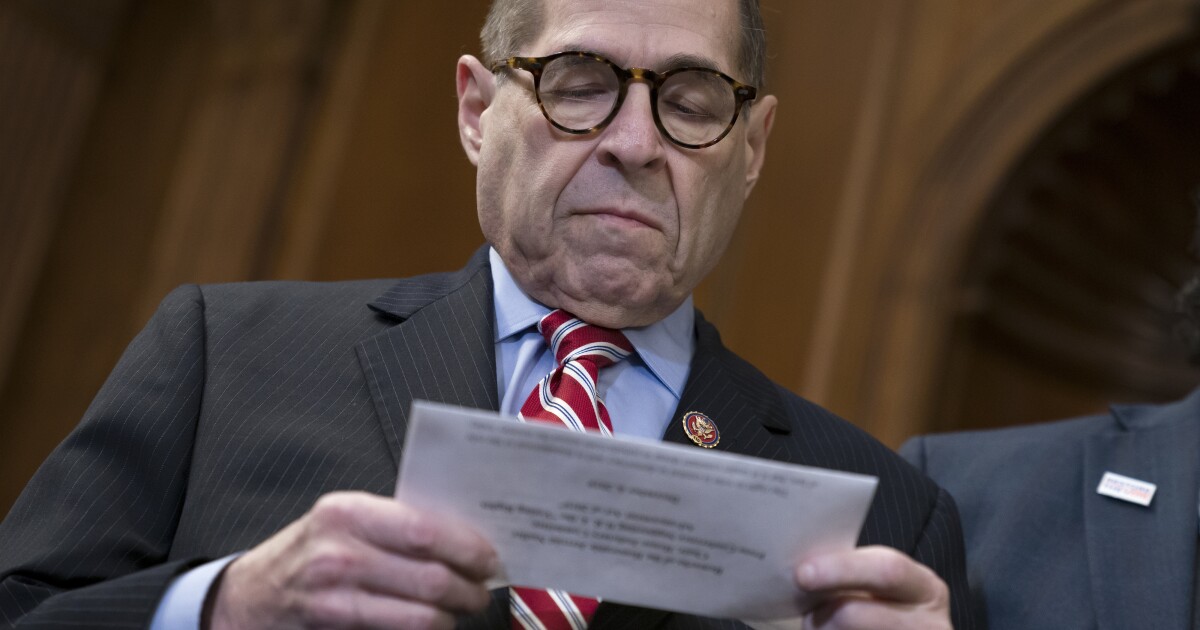 This morning, House Democrats plan to announce their impeachment articles against President Trump after a high-level meeting with House Speaker Nancy Pelosi last night. Democrats are widely expected to accuse Trump of abuse of power and attempting to obstruct congressional investigations.

The announcement follows yesterday’s final House Judiciary Committee hearing, which began with a protester accusing the committee’s chairman, Rep. Jerrold Nadler, of treason and grew only more rancorous from there.

Republicans repeatedly tried to grind down the proceeding with objections, while Democrats accused Trump of jeopardizing the nation’s democracy in a reckless bid for political survival.

17 Problems, but Partisan Bias Isn’t One

In the latest investigation of an investigation, the Justice Department’s internal watchdog has issued a 434-page report that sharply criticizes the FBI for its clandestine surveillance of a former Trump campaign advisor suspected of working with Russian intelligence.

Inspector General Michael Horowitz cited 17 “significant errors or omissions.” But Horowitz also said his investigators uncovered no evidence that the mistakes were intentional or influenced by political bias, as Trump has repeatedly alleged.

— The World Trade Organization’s dispute-settling system is about to get knee-capped by Washington.

— Democratic presidential candidate Pete Buttigieg has been freed from a confidentiality pact that barred him from publicly identifying the clients of McKinsey & Co., a management consulting firm that employed him a decade ago.

After years of deadly wildfires and a season of sweeping blackouts, a new poll of California voters conducted for The Times finds most would impose major changes to the operations and control of Pacific Gas & Electric, a company beleaguered by sharp criticism and struggling to dig out of financial troubles.

Fewer than 1 in 8 likely voters surveyed want PG&E to fix its own problems and maintain its current structure once it emerges from bankruptcy next year. So, what would they like to see instead? That’s where it gets dicey.

How to ‘Adult’ in Six Easy Lessons

Romantic relationships. Money management. Home maintenance. These are among the proverbial things they don’t teach you in school. Except these days, there are classes on “adulting” for college students and postgrads, and they’re proving to be quite popular. Even UC Berkeley is offering a student-run course.

Fish steamed with aromatics, finished with hot oil, and served in a spare and oddly angled room. A carnitas mixta taco known as the “Aporkalypse.” The perfect pastrami. These are just three of the culinary wonders that await in the 101 Best Restaurants of L.A. list, this time adjudicated by our restaurant critics Bill Addison and Patricia I. Escárcega. It’s online now and in print on Sunday, but you have to be an L.A. Times subscriber.

The Times reported the next morning: “Pin-ball games, marble boards, scoop claws and similar devices, under the ordinance approved yesterday by the people, will be declared nuisances in public places, and therefore subject to seizure by the police … Mayor Bowron and his Police Commission urged the adoption of the anti pin-ball law on the grounds that the machines are used for petty gambling, so widespread that the police are totally insufficient in number to enforce the law.”

The ban would eventually be overturned decades later, in 1974 — but in the meantime, plenty of pinball machines were destroyed.

— Does the financing of a Disneyland parking garage amount to a city subsidy? A new lawsuit by a group of resort workers argues it does, and that the Anaheim resort is violating a 2018 ballot measure by failing to pay them a living wage.

— The state wants to hit CVS with a $3.6-million penalty after dozens of its stores declined to redeem cans and bottles — part of California’s broader effort to pressure retailers to accept recyclable containers from consumers.

— A Newport Beach woman has agreed to plead guilty in the the college admissions scandal, admitting she plotted to have mastermind Rick Singer’s employee take online classes for her son and submit them to Georgetown University.

— Amid the wasteland of the Salton Sea, a miraculous but challenging oasis has been born.

— Propelled by Martin Scorsese’s gangster epic “The Irishman,” the searing divorce drama “Marriage Story” and the Vatican-set “The Two Popes,” Netflix racked up 17 Golden Globes nominations in film alone. It signals a new era for cinema.

— The snubs and surprises were many, but we rounded up the biggest. In the TV categories, the Globes overlooked people of color, shutting out Ava DuVernay’s Central Park Five documentary “When They See Us” and the alternate-history drama “Watchmen.” The full list of the nominees includes TV’s first Muslim American sitcom and made for plenty of excited reactions, and includes a handful of head-scratchers.

— In movies, the best director category was again bereft of any women. Charlize Theron calls it “really ridiculous.” And our critic Mary McNamara points out the Globes’ gender problem isn’t just about directors — it’s about what kinds of movies get nominated.

— Before her annual benefit show for homeless LGBTQ youth, Cyndi Lauper talked with us about her new musical, her time in L.A. and how she sees herself in Lizzo and Billie Eilish.

— The Supreme Court on Monday let stand a Kentucky law requiring doctors to perform ultrasounds and show the images to patients seeking abortions.

— The presidents of Ukraine and Russia have agreed to revive the peace process on the bloody separatist conflict in eastern Ukraine and exchange all their prisoners, but they failed to resolve crucial issues.

— As Sanna Marin takes over as Finland’s prime minister, the 34-year-old is becoming the world’s youngest sitting head of state. But she’s breaking the mold in other ways, too.

— In the modern West Bank city of Bethlehem, Christmastime religious tourism is a boon for the local economy. But many Palestinians, feeling it ignores modern residents, are offering other kinds of tourism, too.

— Under a settlement with the feds, the country’s biggest blueberry producer can’t recruit foreign agricultural guest workers for three years and must pay $3.5 million in back wages and penalties.

— Under pressure from the #PayUpHollywood campaign, the talent agency Verve is boosting assistants’ pay and other benefits.

— Russia’s doping scandal just got it banned from the 2020 Tokyo Olympics and other major sporting events over the next four years. But critics say the punishment isn’t severe enough.

— Two linemen have now de-committed from USC in three days, after the university announced Clay Helton was staying on as head coach.

— In inexplicably rushing to an impeachment vote, Democrats are forgoing the subpoenaing of key witnesses who could shed light on potential abuse of power, writes Jonathan Turley, a constitutional law expert whom House Republicans called to testify last week.

— For nearly two decades of fighting in Afghanistan, U.S. leaders have said they are making progress. Documents from government interviews show they weren’t, and they knew it. (Washington Post)

— “You keep loving each other.” In chronicling her grandfather’s dementia, a photographer offers an intimate window into the end of a life, and a lifelong partnership. (STAT News)

— The $120,000 conceptual art piece involving a banana duct-taped to a wall has created a reaction that is bananas. (ArtNet)

Does it seem as if no one in California knows how to drive? (Present company excepted, of course.) Then look no further than the Department of Motor Vehicles handbook. Critics say its prose is just too hard to navigate. Even the DMV admitted to consumer columnist David Lazarus that “the handbook is written at a level that is above where it should be.” Here’s how it could turn the page.

If you like the Today’s Headlines newsletter, please share it with friends. Comments or ideas? Email us at headlines@latimes.com.