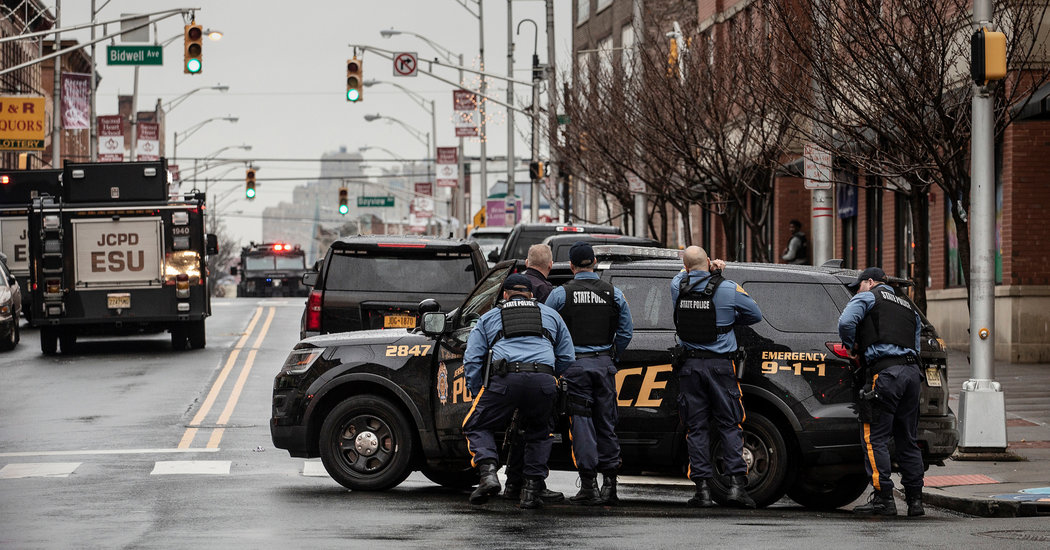 Six people, including one police officer, were killed in Jersey City, N.J., on Tuesday in a series of gunfights that brought destruction to a kosher market and made a residential area feel like a war zone.

The dead included three people in the market as well as two suspected shooters, officials said. The slain police officer, Detective Joseph Seals, was a longtime veteran with the Jersey City Police Department, according to Chief Mike Kelly.

Officials believe the shooting began when the detective approached one of the gunmen at a nearby cemetery in connection with a homicide investigation and was shot dead, according to a person with knowledge of the matter.

The gunmen then fled in a truck and eventually ended up at the kosher market, where they opened fire on police officers and civilians, officials said. For much of the next hour, rapid bursts of gunfire could be heard echoing off the low buildings by residents blocks away.

Investigators believe that the store was chosen randomly and that the incident was not a hate crime. There was “no indication of terrorism,” an official said at a news conference.

The firefight broke out in a residential neighborhood.

For more than an hour, loud exchanges of gunfire rang out in the Greenville neighborhood of Jersey City, which is just across the Hudson River from Lower Manhattan.

Helicopters circled overhead as police officers swarmed the streets. They aimed handguns and long guns in every direction as they traveled down the street in formations, knocking on doors and ushering residents and business owners to safety.

Officials received calls about a shooting at the market at around 12:30 p.m., according to Chief Kelly, who added that the officers who responded were met with “high-powered rifle fire.”

Around the same time, the police learned that Detective Seals had been shot at Bay View Cemetery, roughly a mile away.

Two officers were hit in the gun battle, one in the shoulder and other in the body, Chief Kelly said. Both of them had been released from the hospital by Tuesday night.

Officers were also investigating a stolen U-Haul vehicle that they believed was connected to the shooters, Chief Kelly said. Bomb squads were examining the vehicle.

Three bystanders were killed at a kosher market.

The shootout and police siege plunged the Greenville neighborhood of gentrifying Jersey City, — a residential area with a diverse population, including a budding community of ultra-Orthodox Jews — into chaos, fear and confusion.

Chesky Deutsch, a Hasidic Jew and a community activist who spoke with a shooting victim by phone, said the man was in his 20s and suffered three gunshot wounds.

Mr. Deutsch said the victim did not have a clear memory of what happened.

The victim lives in Brooklyn and had been shopping at the store when the gunfight broke out.

Next door to the supermarket is a small synagogue and yeshiva, Mr. Deutsch said.

He said up to 100 children had been trapped at the yeshiva next door, ranging in age from about seven to 12.

Children inside the building were on lockdown while the firefight and investigation occurred.

Detective Seals had been a police officer for 15 years, rising through the ranks in Jersey City’s busy South District, according to Chief Kelly.

His most recent assignment was to a citywide Cease Fire unit, which concentrates on reducing shootings and making gun arrests

Detective Seals was promoted in November 2017 and had been previously commended with his partner for saving a woman from a sexual assault on Christmas Eve in 2008.

The two officers climbed a fire escape and surprised the 23-year-old attacker, who was arrested and charged with criminal sexual contact and burglary.

The authorities believe Detective Seals was working to halt a gun crime when he came across the shooters at the cemetery.

“We believe he was killed while trying to interdict these bad guys at that other location,” the chief said.

On Tuesday night, more than a dozen, somber police officers stood guard outside Jersey City Medical Center. At one point, three plainclothes officers hugged a woman who was sobbing as she stood amid the glow of red and blue police lights.

At around 5 p.m., dozens of officers saluted outside the emergency room as a body covered in a white sheet was carried to a hearse and a small group of Hasidic Jews followed behind.

‘One of the biggest gunfights I’ve seen in a while.’

Residents cleared from their homes and stores watched anxiously from behind a barricade as SWAT teams, bomb squads and heavily armed officers overtook their neighborhoods.

As they stood at street corners, waiting for word that it would be safe to return, they described a tense standoff punctuated with exchanges of gunfire that did not stop until just before 2 p.m.

“I heard this constant shooting, and it kept going on for about 15 minutes,” said Willy McDonald, 67.

By the time he came outside, there were cops everywhere. “There had to be at least 8 of them.”

“This is one of the biggest gunfights I’ve seen in a while,” said Mr. McDonald. “And I’ve been in Vietnam.”

One frustrated resident, Corey McCloed, 39, said it was like the city was under siege.

The market was at the heart of a Jewish community.

The center of the chaotic scene, the Jersey City Kosher Supermarket, caters to a small, but growing, number of about 100 Hasidic families who have moved to Jersey City in recent years from the Williamsburg section of Brooklyn.

The families, many of whom belong to the ultra-Orthodox Satmar sect, have settled into houses on dense blocks with neighbors that include a Catholic School, a Pentecostal church and a Dominican restaurant.

The kosher market’s opening three years ago signaled that the community was putting down roots in what remains a largely African-American part of Jersey City.

Rabbi Moshe Schapiro, of the Chabad of Hoboken and Jersey City, said the store was “a grocery that is very popular with the local Jewish community” and had “a deli counter that has nice sandwiches.”

Schools were on lockdown.

Sacred Heart School, a Catholic elementary school across the street from the scene of the shooting, was placed on lockdown during the attack, a spokeswoman said. The students there were not harmed.

Twelve public schools in the vicinity of the shooting were also shut down and on lockdown, according to the superintendent of Jersey City Public Schools, Frank Walker.

Schools in neighboring Bayonne, N.J., were ordered to shelter in place as a result of the police activity.