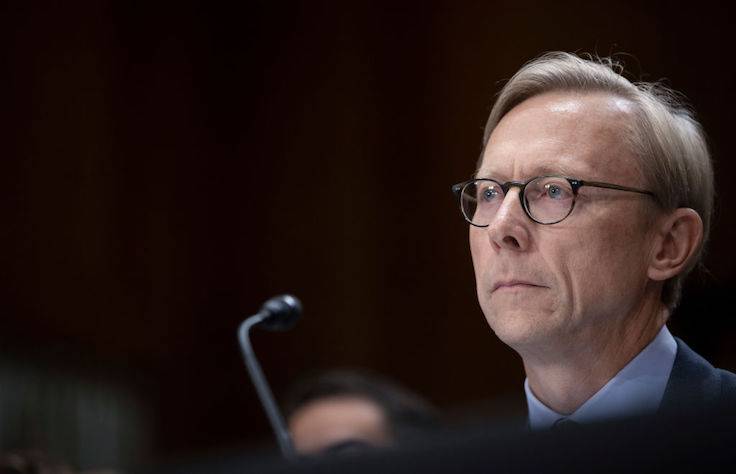 In a sign of warming relations between the Trump administration and Iran, both governments in recent days have expressed a willingness to negotiate a full-scale prisoner release that could see many long-held American detainees make their way home.

Following a surprise prisoner swap over the weekend, senior officials in Tehran and Washington, D.C., expressed a desire to sit down for diplomatic talks that could provide a pathway to negotiations on a range of matters, including the long-stalled nuclear weapons issue that has seen Iran hit with crippling sanctions during President Donald Trump’s tenure in office.

The Trump administration announced on Saturday that it had secured the freedom of Chinese-American researcher Xiyue Wang, who Iran arrested in 2016 and charged with spying. The United States traded Wang for Massoud Soleimani, an Iranian scientist who was incarcerated in the United States for illicitly attempting to export biological materials to Tehran.

Senior U.S. diplomats who spoke to the Washington Free Beacon about the trade said it potentially represents a “first step” toward a broader dialogue with Iran on the issue of hostages, including the most well known imprisoned American, Robert Levinson, who has been in Iranian custody for 13 years. Since the weekend trade, Iranian leaders have expressed a similar willingness to engage in a “comprehensive prisoner exchange” with America.

“We hope that this represents a first step,” Brian Hook, the State Department’s special representative on Iran, told the Free Beacon on Tuesday. “Ultimately this is up to Iran, since we have been open to meeting with them in person for a consular dialogue for years now. We will continue working as hard as we can until every American detained in Iran is brought home.”

“We negotiated the release of an American with no pallets of cash, no sanctions relief, and no change in our policy,” Hook said, referring to the Obama administration’s decision to award Tehran with $1.7 billion as part of an agreement that included the release of four American hostages. “The maximum pressure campaign will continue because it’s working. This shows we are able to conduct two tracks of diplomacy. One track to win the release of Americans held in Iran. And the other, to deny the regime historic levels of revenue while working toward a new and better deal to replace the failed nuclear deal.”

Hook further disclosed that the United States has been seeking a dialogue with Iran on the hostage issue for years. These efforts have been conducted through Swiss diplomats, who have served as intermediaries between the United States and Iran.

“We have been requesting a consular dialogue for years and over the last three weeks things started to pick up when working through the Swiss [intermediaries] I was able to start going back and forth with the Iranians,” Hook said. “As we always do, I asked for Bob Levinson, but what came back was the Iranian diplomats only had the mandate to do the deal we ultimately brokered.”

Still, an opportunity remains for America and Iran to further discuss hostages.

Iranian foreign minister Javad Zarif, the country’s top diplomat and architect of the landmark Iran nuclear deal, expressed his nation’s willingness to pivot to “full scale” talks about hostages in the clearest sign to date that Iran may be serious about meeting with the Trump administration.

“After getting our hostage back this week, [we are] fully ready for comprehensive prisoner exchange,” Zarif said Monday. “The ball is in the U.S.’s court.”

President Trump further hinted at the possibility of talks between the countries during comments to reporters over the weekend and on Twitter.

“I think it was a great thing for Iran,” Trump said. “I think it was great to show that we can do something. It might have been a precursor as to what can be done.”