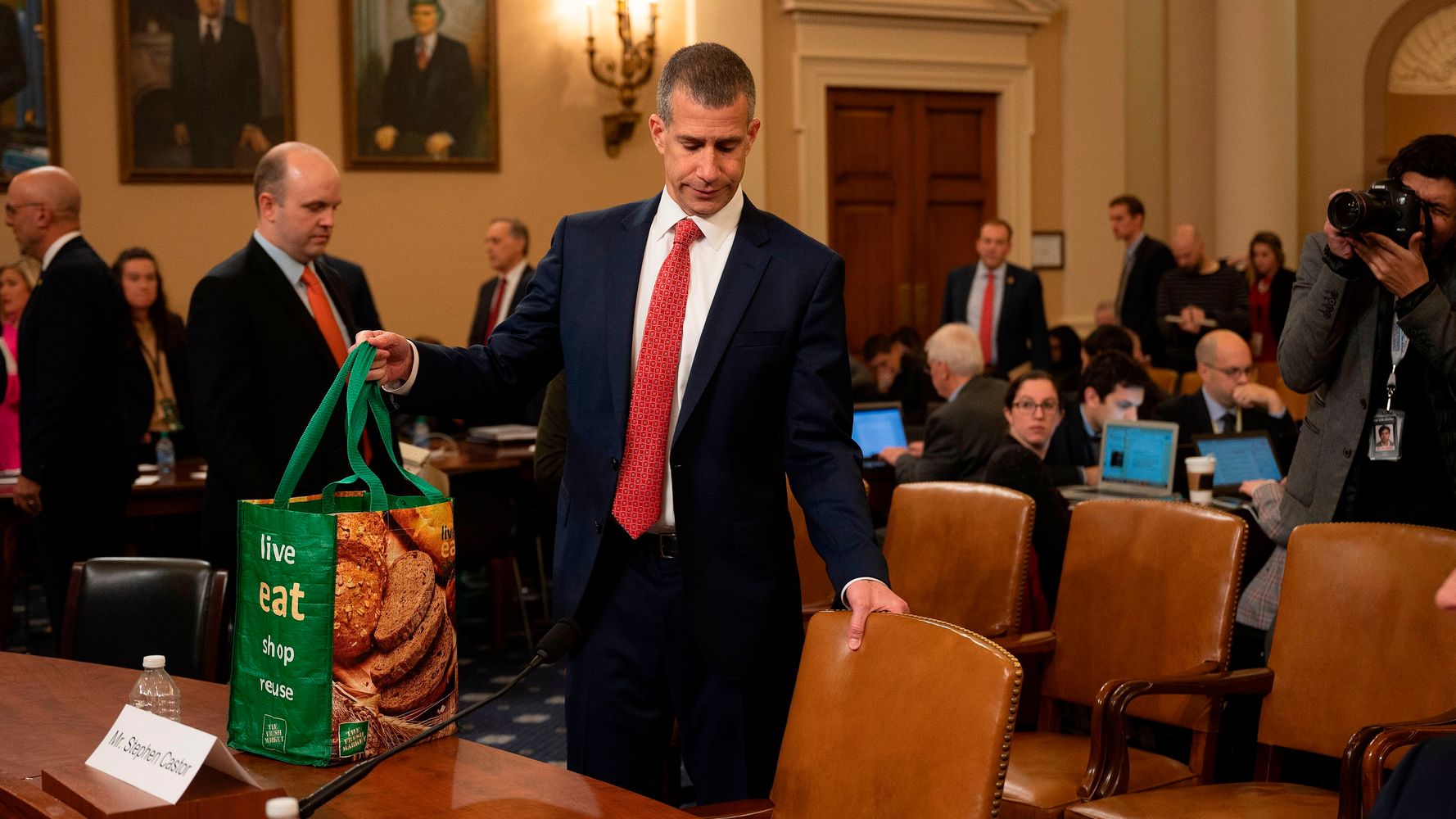 As the nation watched, Castor strolled into the House Judiciary Committee hearing and began unpacking documents from his green reusable grocery tote ― emblazoned with loaves of bread and “Live eat shop reuse” branding.

Castor serves as a counsel for Republicans on the House Judiciary and Intelligence committees and was present at the hearing to testify in the House impeachment inquiry into President Donald Trump. Democrats are in the process of drafting articles of impeachment and are slated to hold a House vote before the end of the month.

At one point in the hearing, Castor was asked by Democratic counsel Barry Berke if he was aware of Trump’s extensive tweeting about former Vice President Joe Biden after Castor claimed that Biden was not a front-runner in the 2020 race. “I try to stay off Twitter,” Castor replied.

Well, it’s a damn shame, because if he did log on, he’d see that he and his green bag have made the internet history books in meme form.

The supermarket chain responsible for the bag capitalized on its moment of impeachment fame with a tweet, announcing that it was the “official briefcase maker of Steve Castor.”

Perhaps indicative of the state of viewers desperate for a lighthearted reprieve, it’s not the first time a reusable vessel has gone viral in an impeachment hearing. State Department official George Kent’s giant Nalgene water bottle blew up on Twitter for being an “absolute power move” during a House Intelligence Committee hearing last month, and it also prompted a response from the brand.

Here’s what Twitter users had to say about Castor and his “briefcase”:

idk that’s a very liberal-looking amazon-wapo kinda bag Castor has and I hope the security screeners checked it for tofu and kale https://t.co/4CmMtDukwW

That time your lawyer makes a stop at the Whole Foods hot bar, on his way to defend you in Congress. pic.twitter.com/BifmoY7t3X

Of course Steve Castor brings his things to historic impeachment hearings in a grocery bag because of course he does.

He’s Gil from The Simpsons come to life pic.twitter.com/t3pihdJWRR

$0.05 back if you bring your own. pic.twitter.com/cDGruvjXa2

True. GOP Counsel Steve Castor, presenting for the minority at today’s impeachment hearing, brought in documents and binders in a big Whole Foods bag, festooned with pictures of various loaves of bread

Is Steve Castor really the best lawyer Republicans could find to defend Trump in the impeachment hearings?pic.twitter.com/Vaxzb5DkLI