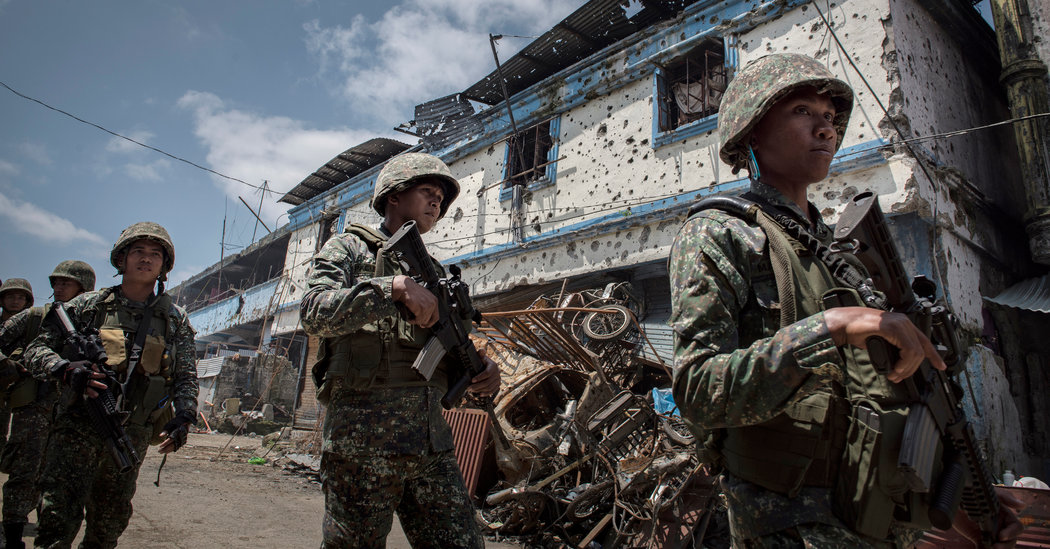 MANILA — President Rodrigo Duterte announced on Tuesday that military rule in the southern Philippines would soon end, two and a half years after he imposed it in response to a rebellion by Islamic State militants in the city of Marawi.

The Philippine military and police had recommended the move last week, saying that the security situation on the southern island of Mindanao, which includes Marawi, had improved. Salvador Panelo, Mr. Duterte’s spokesman, said martial law on the island — which empowers the military to carry out warrantless arrests and set up checkpoints, among other powers — would expire on Dec. 31.

Mr. Panelo said the president was confident in “the capability of our security forces in maintaining the peace and security of Mindanao without extending martial law.” He added, “The people of Mindanao are assured that any incipient major threat in the region would be nipped in the bud.”

Hundreds of Islamist fighters from Southeast Asia and the Middle East took over Marawi in May 2017, with the goal of turning that city of 200,000 people into the center of an Islamic caliphate. The Philippines is mostly Catholic, but Mindanao has a substantial Muslim population.

Intense battles raged in Marawi for months, with the American and Australian militaries providing intelligence support to Philippine forces. More than 1,000 people were killed, including Isnilon Hapilon — who was considered the Islamic State’s leader in Southeast Asia — and his key lieutenants.

The government declared victory in October, but it extended martial law at the end of 2017 and again a year later, saying that militants still posed a threat. A number of foreign militants are believed to have escaped the fighting in Marawi and fled to other restive parts of the southern Philippines, including Jolo island. Two Indonesian suicide bombers killed 23 people at a Catholic church on Jolo in January.

On Saturday, a soldier and four Filipino militants linked to the Islamic State were killed in a gun battle on Jolo. The military said troops had been hunting a faction of the Abu Sayyaf militant group led by Hatib Hajan Sawadjaan, who intelligence officials believe succeeded Mr. Hapilon as the Islamic State’s leader in the Philippines.

Various armed groups have been active in the southern Philippines for decades.

Rights groups had objected to the continuing use of martial law, warning that it eroded constitutional values and noting that Mr. Duterte had raised the possibility of imposing it throughout the country. Drieza Abato Lininding, who became a rights activist after losing his home in the Marawi fighting, welcomed the presidential announcement Tuesday.

“We’ve been consistent in our appeals in the past that martial law is not necessary in the fight against extremist groups,” he said.

He said he hoped the military would immediately lift a curfew imposed in Marawi and nearby areas, saying it would help to spur economic recovery by safeguarding the freedom of movement.

“Marawi under martial law is like living in an internment camp, where people are forced to obey even if what they do is against their will,” Mr. Lininding said.