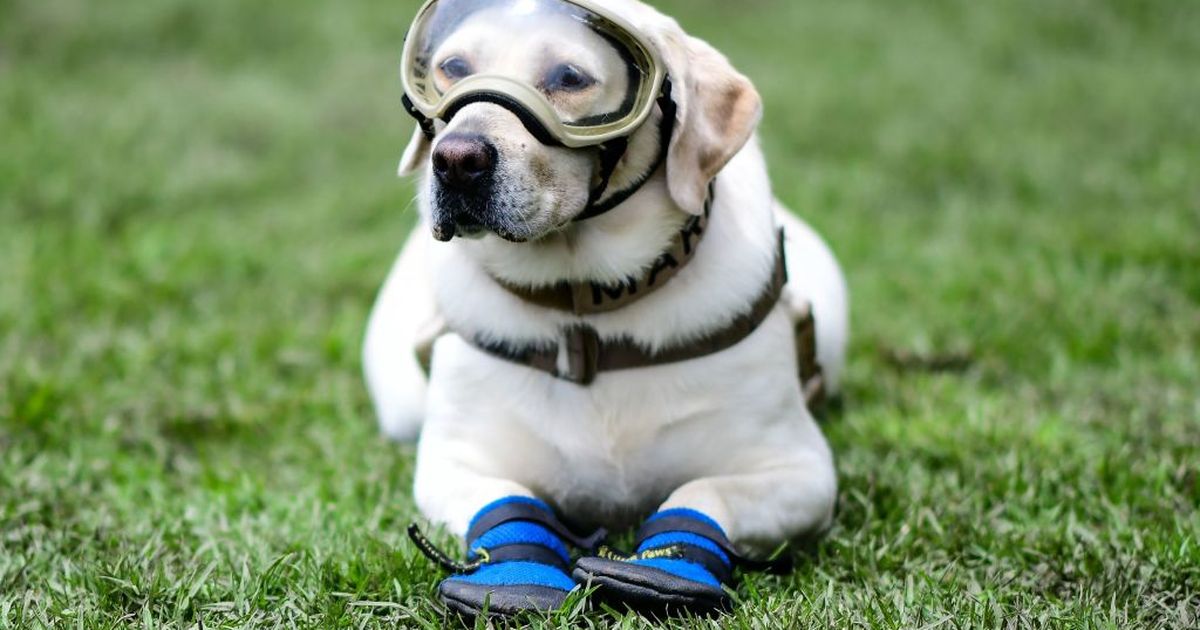 It is an indisputable, immutable truth that all dogs are good dogs. Dogs are furry love factories, made of sunshine, happiness, and sweet toe beans, and humans emphatically do not deserve them.

Every year more precious pups are brought to public attention, reminding us that there is still some good in this world, and 2019 was no different. This year’s squad included , a pup in South Australia who served as the temporary steed of a confused koala joey; , a puppy in Missouri with an extra “tail” protruding from his forehead; and , a wolf-dog in Florida who is probably the largest canine since Clifford.

Though they all deserve recognition, it would be impossible to list every good boy and girl of 2019. We’ve therefore rounded up a handful of some of the very best. In no particular order, here are some of the goodest dogs of 2019.

A Border Collie-Koolie cross, Bear was originally a household pet who was given up after being diagnosed with obsessive-compulsive disorder, a condition that meant he didn’t enjoy playing.

Fortunately, the University of the Sunshine Coast adopted Bear, training him to track down sick and injured koalas in need of help. This is already enough to classify Bear as a good boy of the highest order, but this year he also donned an adorable set of protective booties to help .

“This is the first year that we have been involved in the fires,” Bear’s minder Romane Cristescu told . “It is a bit more dangerous than what we usually do.”

According to , Bear is the only dog in Australia who can detect the animals by the smell of their fur. “Once he finds a koala, he sits very still to indicate to a human that he is near a koala,” said the International Fund for Animal Welfare’s Rebekka Thompson-Jones. “He’s then rewarded with a ball which he’ll chase.”

Bear is such a good boy that Tom Hanks thinks he deserves his own Disney movie. Yes, please.

This is Tula. She’s been protecting the penguins of Middle Island in southwest Victoria for the last 8 years. Increasing their population from less than 10, to over 100. This week she retired, but not before helping train a new class of penguin protectors. 15/10 thank you, Tula pic.twitter.com/jShGrHbzkD

Bear wasn’t the only wildlife-loving Australian canine to fetch the internet’s heart this year. The 11-year-old Maremma Sheepdog Tula from her role as penguin protector in October, ending eight years of diligent wildlife conservation work.

“She’s always been the first one to get up from lying down, run really fast and bark at the foxes, so she’s got a bit of arthritis and is a bit stiff and sore now,” Middle Island Project coordinator Dr Patricia Corbett told .

There were less than 10 Little Penguins on Victoria’s Middle Island when the was established in 2005. After Tula and her colleagues began guarding the birds from predators such as foxes, the colony grew to 182 by 2017. Though that August when bad weather kept the dogs away, the Maremmas are making sure the population recovers.

Tula now stays home on the farm, looking after chickens and sometimes helping train future penguin guardians, like her successor Mezzo. “Maremmas don’t like to not have a job, so she’s going to be continuing on her role in a different way,” said Corbett to Australia’s .

Another dog who celebrated her retirement this year was , a Labrador Retriever who has spent nine of her 10 years working to help save people after large-scale disasters.

Frida was first brought to international attention in Sept. 2017, when she participated in recovery efforts after the earthquake in Puebla, Mexico that killed over 350 people. Images of her kitted out in her protective goggles, booties and a harness went viral, becoming a in the disaster’s aftermath.

However, despite the sudden fame, this was not Frida’s first job. This good girl had previously helped in several other emergencies, including the 2010 Haitian earthquake, a 2012 landslide in Guatemala, and a 2013 gas explosion in Mexico City.

Frida often recovered bodies, but is also credited with saving 12 lives during her career. Last year, a statue of her alongside her trainer Israel Arauz was erected in a park in Puebla City.

“Frida stole the heart of all Mexico and thousands more abroad,” Deputy Naval Minister Eduardo Redondo told Agence France-Presse (via ). “Her bark always gave hope, and in moments of pain and uncertainty she brought relief.”

Frida’s retirement ceremony took place in June, part of the Mexican navy’s “International Rescuer’s Day.” She was presented with a chew toy as a sign of her retirement, as well as gratitude for her long years of service. She will now help train other dogs, as well as enjoy some well-earned rest.

Charlie and Maverick, the blind dog and his seeing eye dog

This is Charlie and Maverick. Charlie had his eyes removed due to glaucoma, but then Maverick came along as his little helper. Now they’re doing amazing. Both 14/10 pic.twitter.com/qjkhYLihEO

Here’s a package deal of good boys: , a blind golden retriever and his seeing eye dog.

After losing his sight to glaucoma in 2017, 11-year-old Charlie was enjoying his twilight years with his owners Adam and Chelsea Stipe in Mooresville, North Carolina. Then on New Year’s Day 2019, the family welcomed a new addition to their household: A puppy named Maverick.

“We originally got Maverick because we wanted our newborn son to grow up with a dog,” Chelsea told . “It just so turned out that he was also helpful to Charlie!”

Though initially unimpressed with the energetic furball, Charlie eventually warmed to his new friend. He began to prefer taking walks with Maverick instead of alone, and the puppy’s playfulness brought out new life in Charlie.

“When they would play, Maverick would realize that Charlie would lose the toy sometimes, so [Maverick] would pick it up and put it back in front of him to re-engage playtime,” Chelsea told .

Sadly, Charlie passed away in July, leaving Maverick to carry out good boy duties in his memory. “[Maverick is our] ray of sunshine during this dark and difficult time,” the Stipes wrote on a couple of days after Charlie passed. “He’s such a good and loving boy. I think he knows things are different.”

Last year, Kratu the Carpathian-Mioritic cross made headlines with his . This year, that same chaotic anti-establishment spirit which fuelled Kratu made an appearance at the Westminster Dog Show, this time embodied by a small Bichon Frise named Winky.

Entered into the Masters Agility Championship Preliminaries, Winky bucked convention by opting for style over speed. Completely unconcerned with the running timer, the dog trotted from obstacle to obstacle at a leisurely pace, even stopping occasionally to appreciate the captivated audience.

Winky took 192 seconds to finish the course, with 92 faults along the way. For comparison, the winner finished their run in 32.05 seconds. However, though Winky may not have won a ribbon, the persistent pooch did win a whole heap of fans.

This calm competitor is an inspirational reminder that it’s OK to move at your own pace and enjoy the journey. Regardless of how slowly you move, as long as you keep moving forward you’ll get there in the end.

It was a bit of a manic Monday morning over here! But through the chaos, came great communication from Stella. Take a look at these two videos that show one of Stella’s buttons resetting, and how she responded to this situation. • Video 1: When Stella said “outside,” her back right paw accidentally reset her “beach” button. Stella knows what that beeping sound means because this has happened several times before. Stella commented “Mad” then “Want” but her “want” button didn’t activate either! Unfortunately Stella’s beach button broke. • Video 2: While Jake and I were discussing options, Stella walked to her device, looked where the “beach” button should be, and said, “Help water outside.” 😲😲😲 • We can learn several lessons from our morning! First of all, we should always have backup buttons. Secondly, Stella gets upset when she can’t say one of her favorite words! Situations like these show why AAC users should never have words removed from their devices. Lastly, it’s incredible that Stella found a different way to communicate “beach” since her button was no longer an option.

Most dogs are considered well-trained if they can sit, stay, and don’t immediately scarf up every edible scrap that strays across their sightline. One-year-old Stella in San Diego, California has gone way beyond these basics, learning to “talk” with the help of her speech pathologist owner Christina Hunger.

Stella doesn’t actually vocalise English words — that would require a drastic change in her physiology and also be incredibly confronting. Instead the Catahoula-Blue Heeler mix uses an Augmentative and Alternative Communication (AAC) system, pressing buttons on a homemade soundboard to say words such as “walk”, “eat”, and even “no”.

“If we had finished dinner and didn’t mention going for a walk yet, Stella would say ‘walk’ multiple times while staring at us,” Hunger wrote in a . “If her toy was stuck under the couch, she would say ‘help’ and stand right where she needed Jake or I to look.”

Hunger got the idea to teach Stella to speak while working with children who used AAC. Though Stella began with only one word — “outside” — her vocabulary had expanded to nearly 30 by the time she was brought to international attention. Stella is now able not only to ask for things but make comments as well, and can string words together in short phrases. Unfortunately, this development came with some devastating consequences.

“One afternoon shortly after the Daylight Savings time change, Stella said, ‘eat’ repeatedly at about 3:00PM,” wrote Hunger. “When Jake and I did not feed her dinner this early she said, ‘love you no’ and walked into the other room.”

We wish Hunger a speedy recovery.