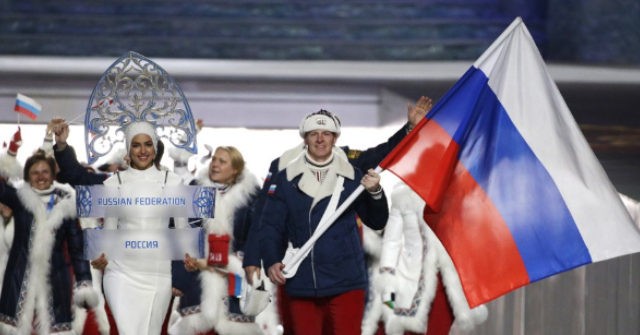 Russia has been slapped with a four-year ban from Olympic competition by the World Anti-Doping Agency (WADA).

During the the ban, Russian athletes will only be allowed to compete in major events if they were never implicated in positive doping tests, or if their data was not manipulated.

The Russian anti-doping agency (RUSADA) has 21 days to appeal the ruling.

According to the AP:

‘Flagrant manipulation’ of the Moscow lab data was ‘an insult to the sporting movement worldwide,’ the IOC said last month.

‘I’m not happy with the decision we made today. But this is as far as we could go,’ said Linda Helleland, a Norwegian lawmaker who serves on WADA executive committee and has long pushed for a tougher line against Russia. ‘This is the biggest sports scandal the world has ever seen. I would expect now a full admission from the Russians and for them to apologize on all the pain all the athletes and sports fans have experienced.’

Though the ban will definitely impact Russian athletes, the IOC says they’re far more interested in seeing Russian officials pay the price for the scandal, not the athletes.

WADA’s athlete commission, however, wants to see a ban that impacts Russia’s entire international sports structure from the athletes all the way up to the officials. The state-run doping program was first exposed in 2014, when the Russians hosted the Winter Olympic in Sochi.

“This entire fiasco created by Russia has cheated far too many athletes of their dreams and rightful careers, for far too long,” the WADA athlete panel said in a statement.

As the AP reports:

RUSADA chief executive Yuri Ganus, an independent figure criticizing Russian authorities’ conduct on the doping data issue. Authority was passed to the agency’s supervisory board after an intervention led by the Russian Olympic Committee.

The ROC on Saturday labeled the expected sanctions as ‘illogical and inappropriate.’

Russia has stuck to its claim that deceptive edits in the data were in fact made by WADA’s star witness, Grigory Rodchenkov. The former Moscow lab director’s flight into the witness protection program in the United States was the subject of an Oscar-winning documentary.

Technical reasons were claimed — and debunked by WADA investigators — for why the data appeared to have been edited shortly before the delayed handover in January.

However, that appeals process will be complicated by the fact that RUSADA, the group which will have to file the appeal, was itself declared non-compliant on Monday.