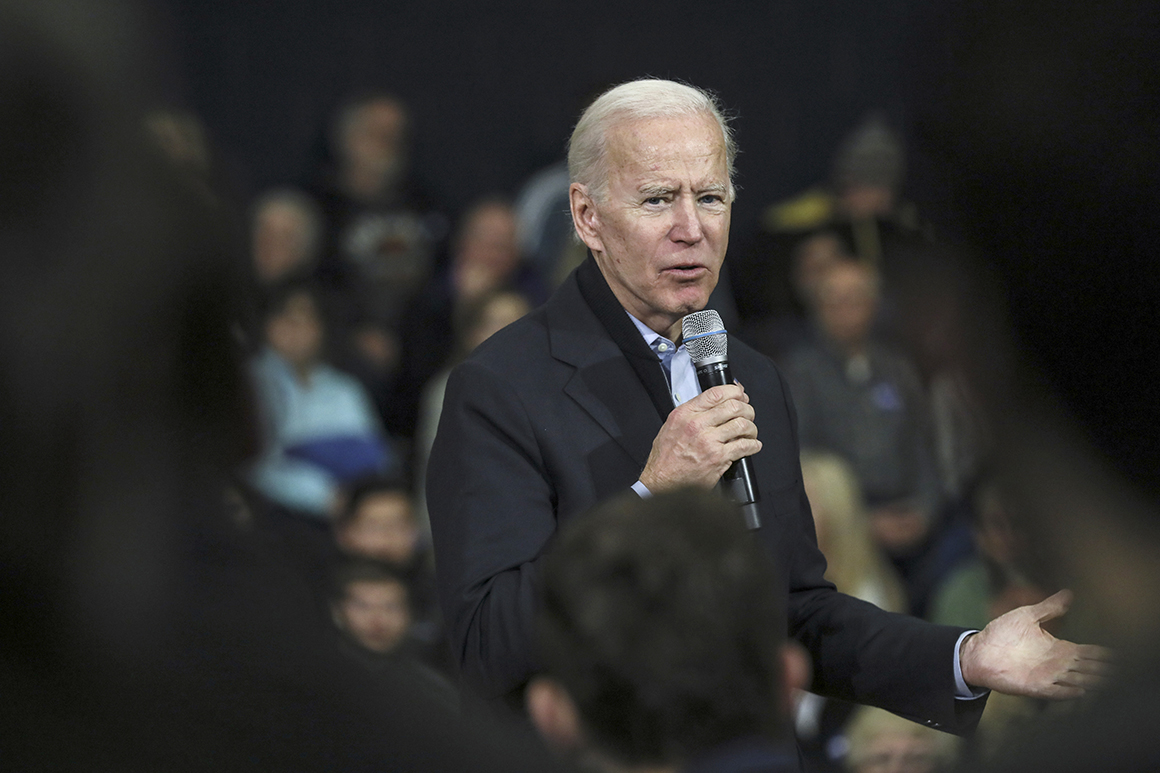 “He told me to remember that it’s not my fault,” said Theresa Hanley, 34, crying as she walked away from their exchange. Hanley said she approached Biden to thank him for his work on the issue and to urge him to help strengthen a domestic violence law in Iowa. “It meant the world to me. I wish more people would think that way.”

Biden caused a stir last week after his fiery exchange with an Iowan who suggested the former vice president helped his son get a sweetheart deal in Ukraine. The dramatic episode dominated the news, and Biden suffered blowback from some quarters for losing his cool.

But the episode was actually an outlier.

Over an eight-day bus tour of rural Iowa, Biden took part in scores of off-mic exchanges with voters that showed a much different kind of candidate — far from the stumbling and inarticulate presence on TV, or the mocked politician who nibbled on his wife’s finger in the middle of a rally.

Biden doesn’t have Pete Buttigieg’s roaring crowds or Elizabeth Warren’s block-long selfie lines. But in the course of his 2020 run and especially through small towns in Iowa, his emotional exchanges have become a hallmark of his events. They help explain his enduring popularity in the polls despite the mangled syntax and frequent flubs.

Biden’s supporters say it’s his breadth of personal experience — namely his own struggles with grief, on top of four decades in government — that make him uniquely qualified in the crowded Democratic field.

“I lost a daughter four years ago at age 25,” said Ellen Laag, still crying after walking away from her exchange with Biden. She said she felt she needed to share her story with someone who understood pain. “You never get over grief.”

Though these kinds of interactions take place wherever Biden campaigns, they were more pronounced the past week in Iowa because aides removed rope lines that typically separate the candidate from his audience. At some points, Biden would shoo away staffers so he could spend more time with a voter.

People often arrive at Biden’s events feeling an intimate connection with him. Many are aware of the tragedies he suffered: his wife and daughter dying in a car crash in 1972, and losing his son Beau to brain cancer in 2015. Biden’s story of loss is especially fresh to Iowans; it was the subject of a TV ad aired in the state this fall, which tied his family tragedies to health care.

“I cannot fathom what would have happened if insurance companies had said for the last six months of his life, ‘You’re on your own,’” Biden said in the ad, which showed him hugging Beau as well as somber images of the former vice president. “The fact of the matter is, health care is personal to me.”

This ad wasn’t easy for me to record.

Health care is personal to me. Deeply personal. pic.twitter.com/a8UNsnkLhI

Former Iowa Gov. Tom Vilsack, who appeared with his wife Christie at multiple events for Biden, said after his 5-year-old granddaughter died in 2017, Biden went out of his way to connect with their son, Jess. Biden took time to console Jess and invited him to open up, Vilsack said, adding that Biden said they now belonged to a fraternity neither wants to be part of: the parents of lost children.

“When you go through something like that, it changes the way you look at life,” Vilsack told voters at one event. “You need to know that this is a man with great empathy and an ability to connect to those who suffer. And trust me, a president has got to have that quality.”

When asked why, on the first leg of his tour, he wasn’t taking questions from audiences, Biden said he finds one-on-one encounters are more valuable.

“I know I got in trouble for using this phrase long ago, but I’m a tactile politician,” Biden said after one of his stops. “I like to shake hands with someone, get a sense of what’s on their mind. I like spending time with folks, I have trouble walking away from them. I just find it’s the most significant thing you can do and this bus tour allows that.”

Cathy Buxengard drove from Minnesota to see Biden. She told him her 99-year-old mother, an army nurse during World War II, wanted to be there but couldn’t make it.

“I told him she was so upset with Trump, she says he’s ruining everything that our boys fought for,” Buxengard recounted. Biden then asked her to call her mother on her cell phone. With a crowd of people still waiting in line to talk to him, Biden grabbed the phone, thanked her for her service and told her about the important role nurses had played in his life. Buxengard, moved by the sentiment, put the phone back to her ear and cried.

At another event, Biden spent several minutes talking to David Readinger, attempting to allay the anxiety he expressed about Trump staying on for another term. Noting he had read about Biden’s struggles with grief in the local paper, Readinger said he already felt a connection to the vice president when he walked in the door.

Your guide to the permanent campaign — weekday mornings, in your inbox.

“He has a morality, an empathy about him,” Readinger said.

That seemed to come through even to those who didn’t interact with Biden on the trail. In Mason City, Yvonne Addis, who hasn’t decided on a candidate but likes Buttigieg and Warren, said she entered the event a skeptic, unimpressed and even troubled by Biden’s performances at the Democratic debates. But up close, Addis said she saw a different person.

“It inspired confidence in me. He was fluent, he was articulate. He spoke without notes. He was convincing he was the man who could lead this country,” she said. “He speaks openly about loss in his life. He is a man of compassion.”

Marc Caputo contributed to this report.