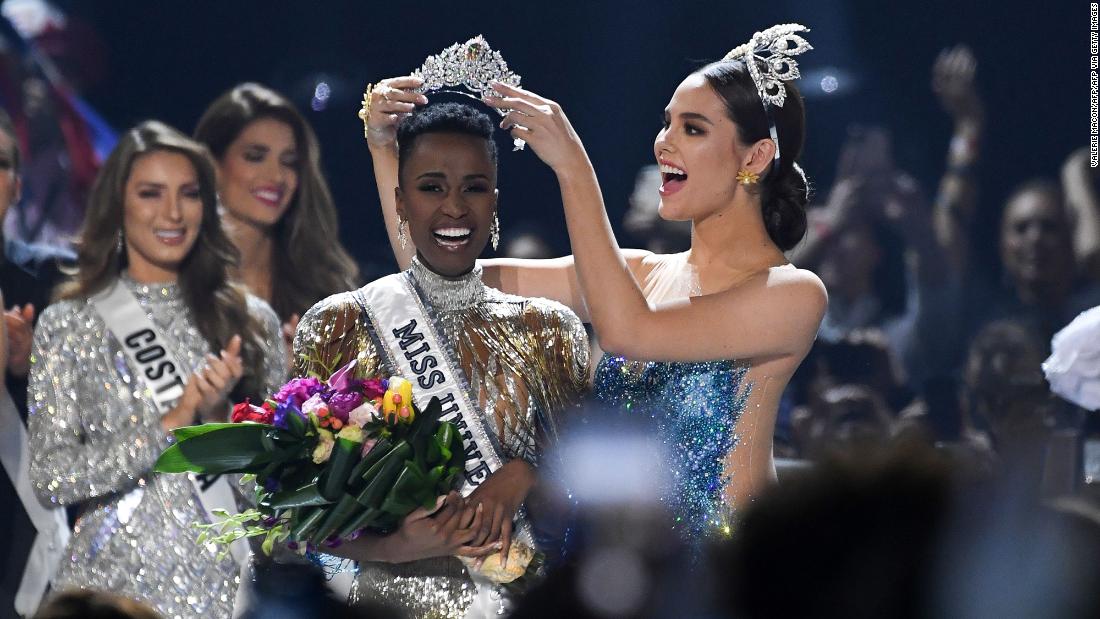 Zozibini Tunzi was crowned Miss Universe Sunday night after excelling through rounds of swimsuit and evening gown struts, questions on social issues and one final chance to explain why she was the right choice.

“I grew up in a world where a woman who looks like me — with my kind of skin and my kind of hair — was never considered to be beautiful,” she said in her last response. “I think it is time that that stops today. I want children to look at me and see my face and I want them to see their faces reflected in mine.”

The two runners-up for the crown were Miss Mexico and Miss Puerto Rico.

“If you do not use your beauty for your life’s mission, it’s just an empty ornament,” Sofía Aragón, representing Mexico, said earlier in the competition.

“Being on the Miss Universe stage is not just a dream” Anderson said. “I believe that I found my mission. It’s a representation of dedication, resilience and perseverance. I do believe my mission is to show the world that magic happens when we refuse to give up because the universe always listens to a stubborn heart.”

And if you’re wondering, yes, there was another mix-up and Steve Harvey was involved in it. But it was nothing like the 2015 disaster when he called out the wrong winner.

Harvey hosted the pageant for the fifth time sporting a bedazzled green and gold suit jacket.

He was commenting on a costume from earlier in week and said Miss Philippines won the National Costume Contest. But the woman standing next to him said she was Miss Malaysia.

The massive competition was hosted at Tyler Perry Studios in Atlanta.

It has already made history with Miss Myanmar, Swe Zin Htet, who says she’s the first openly gay contestant.

Last year’s winner, Catriona Gray from the Philippines spoke during Sunday’s pageant, saying the past year has been “unforgettable, life-changing and purposeful.”

“We’re getting this amazing platform to voice the things we’re passionate about, the things we care about,” she said in a video. “I always had a voice, but Miss Universe allowed me to amplify it.”