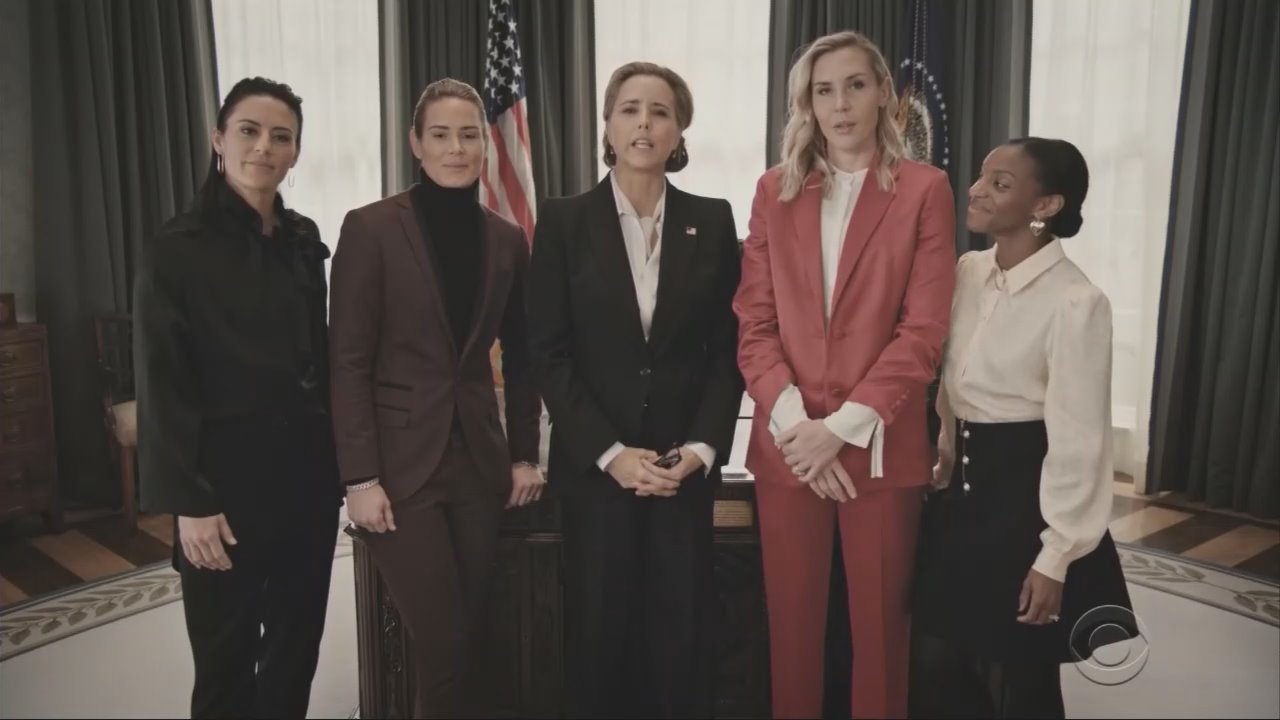 CBS’s Madam Secretary has finally come to an end. Much like the impeachment hearings, this show has been obnoxiously partisan and has lasted way too long. Predictably, the series finale is the same with one last terrible call for “equality.”

The December 8 finale “Leaving the Station” sees President Elizabeth McCord (Téa Leoni) officially signing the Equal Pay and Family Leave Act. As the name states, the act mandates equal pay for women as well as “spousal leave” for families, despite the fact it’s already illegal to pay women less than men for the same job.

Elizabeth: Welcome, everybody. I am so thrilled to have these women here lending their voices to this cause.

Ashlyn: We’re honored to be here, Madam President. We’ve been speaking out about pay equity for a long time in our own profession, but the problem is everywhere.

Crystal: The average American woman makes only 82 cents for every dollar earned by men.

Allie: And it’s even worse for minorities. African American women make 63 cents on the dollar. That’s why we always say, “Equal work…”

Allie: You could steal that phrase, Madam President.

Elizabeth: Well, I just might take you up on that. And this act also provides for spousal leave.

Ali: We love that, whether your partner’s your husband or your wife.

Angela: And cut. Thank you, ladies. That was wonderful.

The event gets a lot of fanfare, but for some women it’s not enough to stop at equal pay. Elizabeth gets inspired to reintroduce the Equal Rights Amendment (ERA) to have “equal rights” for women enshrined in the Constitution. Of course, Elizabeth doesn’t care to tell us any rights men have that women don’t aside from offering misleading pay statistics, but that doesn’t stop the show from insisting we need the ERA. In fact, we apparently need it so much that Madam Secretary has the nerve to have First Gentleman Henry McCord (Tim Daly) lecture the very female dissenter Senator Amy Ross (Tyne Daley) on supporting the initiative.

Senator Ross: Henry? Just curious. What’s your take on this?

Senator Ross: Well, of course you’d have to be.

Henry: Theoretically, it guarantees equal pay, but that hasn’t worked out so well.

Senator Ross: I am concerned that the ERA will strip women of all of the legislative protections that we fought tooth and nail to enact: Social Security benefits for stay-at-home moms, which I was, and widows, which I am. Uh, food subsidies. Uh, workplace safety.

Henry: They’re only necessary to try to help level an uneven playing field.

Senator Ross: No. They’re necessary because of 10,000 years of evolution. Men and women aren’t the same, no matter how much we’d like to make it so. Sometimes separate is good. But the proponents of the ERA, uh, don’t…don’t acknowledge that truth.

Henry: And opponents don’t acknowledge that separate is so often used as a pretext to prevent equality.

Senator Ross: This isn’t about sexism. It’s about reality. The worst thing about this crusade is that it won’t work. It won’t fundamentally change biology or the requirements of motherhood or, uh, how men and women interact.

Henry: Because men and women are different.

Henry: But different doesn’t mean inferior. And women have been fighting to prove that they’re not since the inception of this country.

In another world, this would probably qualify as “mansplaining,” but since Senator Ross opposes “equal rights” I guess her opinion doesn’t count.

The episode certainly doesn’t think her opinion counts since after this there’s no sign of dissent from Congressional members. To guarantee that, the McCords help sway doubters by inviting them to Elizabeth’s daughter’s highly exclusive wedding, or as Elizabeth’s White House Counselor Mike (Kevin Rahm) calls it, “a time-tested ancient, sexist ritual, wherein a virginally attired woman is passed from one man to another.” Somehow this eventually comes off as a decent idea and not usurping her daughter’s big day since she agrees to it. I never knew the much-debunked wage gap meant that much to Elizabeth.

While Elizabeth manages to get the votes she needs for Congress, she’s falling short of states needed to ratify the Constitution. Still inspired, she and Henry take an old-fashioned whistle-stop tour to campaign in the states themselves, surrounded by adoring supporters. If that’s not a liberal bubble, I don’t know what is.

And so concludes Madam Secretary, a six-season drag that allegedly “believed politics could help” and “believed politics wanted to help.” In reality, the show was a constant puff piece for Hillary Clinton that propped up liberal politics and policies as the saviors of the country. Unlike Hillary, however, we’ll hopefully never hear from the McCords ever again after 2020. That’s something both men and women should definitely support.