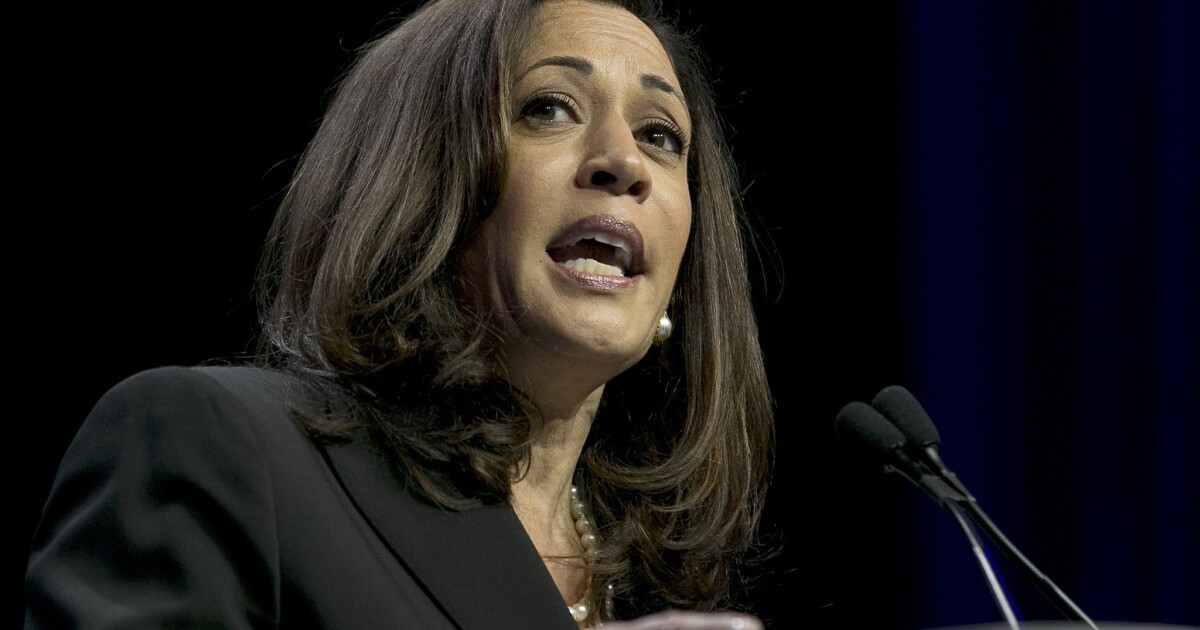 Kamala Harris didn’t do a great many things well in her crash-and-burn campaign for president. But her swift exit from the race was executed perfectly.

By quitting when she did, Harris avoided embarrassing losses in several early contests and, most important, her home state of California, preserving her status as a leading vice presidential prospect and positioning her as a strong candidate for a place in the Cabinet, such as attorney general, in a Democratic administration.

The freshman U.S. senator also gave herself more than adequate time to politically recover ahead of a 2022 reelection campaign, should she decide to seek a second term.

Not that Harris need worry too much about hanging onto her Senate seat — though some remedial work remains to be done.

Speculative talk has circulated of a challenge within the Democratic Party; one name mentioned is billionaire Tom Steyer, should his presidential bid fail. But even if she faced a primary opponent, Harris would start the contest as a solid front-runner given two big advantages: her gender and her political base here in the San Francisco Bay Area. (Women, a key part of Harris’ support, generally turn out to vote in greater number than men, and Northern California typically holds more sway in statewide elections than Southern California.)

“She’s a formidable political talent who was burdened in this race by a strong field, the inability to settle on a message and some troubles internally,” said Rose Kapolczynski, a veteran Democratic strategist who has remained neutral in the presidential nominating fight. “But that doesn’t mean the impressive talent isn’t still there.”

At 55, Harris is young enough to seek the presidency again, or run for California governor, an executive position the former state attorney general was thought to covet before choosing instead to run for Senate in 2016.

On the more immediate horizon is the possibility of being chosen as someone’s vice presidential running mate. One of the main job descriptions, leading the attack on the opposition, is a role for which the pugnacious ex-prosecutor seems particularly well-suited.

In addition, Harris’ age, gender and ethnic background— a father from Jamaica and mother from India — would offer a distinct counterbalance if former Vice President Joe Biden or another white male became the Democratic nominee.

Although Harris and Biden notably clashed over his record on issues involving race — an attack that deeply and personally wounded him, according to people close to Biden— he did not rule out considering her as a running mate. “I’m not good at keeping hard feelings,” he told reporters shortly after his erstwhile rival quit the race.

All those calculations may have been moot had Harris, with her fundraising dried up, not departed the contest as expeditiously as she did.

“By getting out of the race early there’s time for hurt feelings to heal,” said Dan Schnur, who served as a strategist for Republican California Gov. Pete Wilson’s unsuccessful 1996 presidential run. “If she were still fighting this out in June, it would be a lot harder for her to make amends with the nominee. Nominees are much more forgiving when the scars aren’t as fresh.”

Running, in effect, as an understudy would also eliminate one of the major problems that plagued Harris’ presidential effort. “Her biggest challenge was trying to decide whether to run to the left of the center,” said Schnur, who is now a political independent. “If she’s the running mate, the nominee will make that decision for her.”

Harris’s ill-starred presidential campaign did not enhance her standing back home.

Her job approval rating, which was not particularly strong to start, sank along with her presidential hopes, a fate not unusual when an officeholder steps into the more obviously partisan role of a candidate seeking the White House. (That said, many in her own party cooled on Harris’ candidacy; by the time she quit Tuesday, 6 in 10 likely California Democratic primary voters wanted her out of the race.)

More damaging, Harris was criticized for missing Senate votes and lavishing far more attention on voters in Iowa and South Carolina than her own constituents. When California was ablaze and hundreds of thousands of residents were coping with power outages, she was busily pursuing her political interests elsewhere. One video that circulated on social media showed her shimmying into a Democratic bash in Des Moines as flames whipped through a portion of San Bernardino.

The good news, from Harris’ perspective, is “there’s a lot time between the fires and 2022,” said Bob Shrum, who teaches political science at USC. In 1986, he helped another failed California presidential hopeful, Democratic Sen. Alan Cranston, narrowly win a tough reelection fight. (Back then, California was a much different state, with a Republican governor and U.S. senator and a preference for the GOP in presidential elections.)

Shrum suggested Harris would likely spend a good deal more time in the Senate going forward, in much the way Cranston concentrated his focus after being humbled in his White House bid.

Harris declined an interview request. A spokeswoman, Meaghan Lynch, said in an emailed statement, “Serving the people of California has always been Senator Harris’ number one priority.”

Fortuitously for Harris, the anticipated Senate impeachment trial of President Trump could help her political rebound.

Virtually every one of the moments that boosted her White House bid — the inquisitions of attorney general nominees Jeff Sessions and William Barr, the grilling of Supreme Court nominee Brett M. Kavanaugh — played out within the marbled walls of the Capitol, where Harris benefited from her penchant for meticulous preparation and the skills she honed in the courtroom.

Although the role of lawmakers is to sit as jurors and mainly be seen and not heard, there will be ample opportunity for commentary from the sidelines in what figures to be an all-consuming media spectacle. Harris’ performance will not only serve as a nationally televised audition for the vice presidency but also bolster her political standing with Democrats throughout the country and, significantly, back home in this most fervent of anti-Trump bastions.

Even if she’s passed over by the presidential nominee or fails to win a Cabinet post, Harris will, at the least, have shored up her reelection prospects and made it less likely she’ll face a debilitating challenge within her own party two years from now.

As Schnur put it, “If the worst thing a Democratic opponent has to say about Harris in 2022 is that she ran for president for a while in 2019, she’ll probably be all right.”