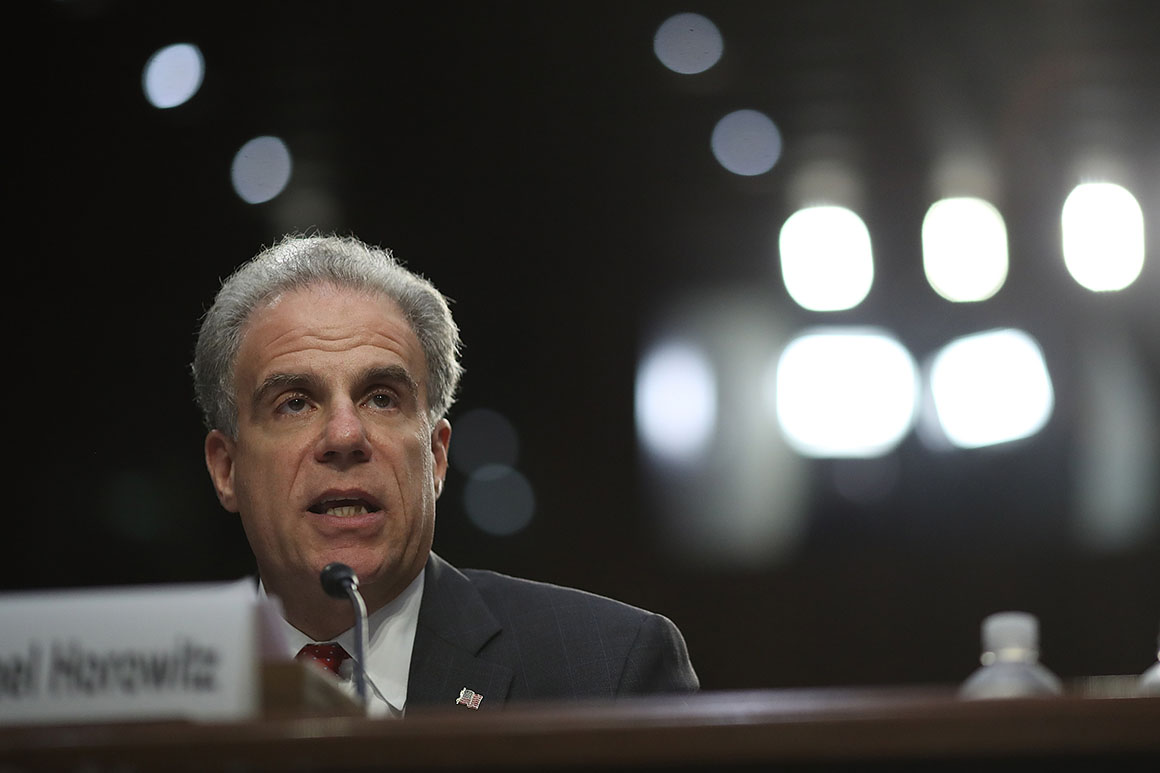 We pored through the 434-page document and highlighted the most important revelations. Check back for updates.

A key accusation among Trump’s allies has been that the FBI predicated its investigation of Trump campaign officials Carter Page, Paul Manafort, George Papadopoulos and Michael Flynn on information the bureau received from British ex-spy Christopher Steele.

But Horowitz found that the Crossfire Hurricane team — the codename agents gave to the Russia inquiry — did not receive Steele’s election reporting materials until after the investigation had already been opened using information about Papadopoulos the team received from a foreign ally.

The inspector general wasn’t lacking in materials. According to the report, Horowitz’s team got to examine more than 1 million documents and conducted 170 interviews with more than 100 witnesses.

Pretty much all the key players who were integral to the Russia probe agreed to meet with the investigators, including former Attorney General Loretta Lynch, former FBI Director James Comey and former deputy attorneys general Sally Yates and Rod Rosenstein. The IG also interviewed Dana Boente, the current FBI general counsel who also has served as an acting attorney general and acting No. 2 at the Justice Department.

Steele also met with the IG investigators. Two witnesses — Glenn Simpson and former State Department official Jonathan Winer — turned down requests for voluntary interviews and the IG chose not to force the issue.

FBI’s receipt of Steele’s dossier ‘played a crucial role’ in seeking surveillance order, but no evidence political bias was a factor

The Crossfire Hurricane team initially was waived off of applying for a Foreign Intelligence Surveillance Act warrant for Carter Page by high-level Justice Department officials.

The officials said the team needed more evidence first that Page was an agent of a foreign power. But after receiving Steele’s report, which detailed alleged coordination between Page and the Kremlin in the summer of 2016, the team asked again and were allowed to move forward.

While the agents did not have corroborating information to support Steele’s reporting, Horowitz found, he also “did not find documentary or testimonial evidence that political bias or improper motivation influenced the FBI’s decision to seek FISA authority on Carter Page.”

The IG review puts some distance between the big decisions at the center of the Russia probe and the two top FBI officials who have been castigated by Trump and his allies for exchanging politically biased text messages.

According to the Horowitz report, FBI attorney Lisa Page didn’t play a role in the bureau’s decision to open Crossfire Hurricane or the other four cases tied to George Papadopoulos, Carer Page, Michael Flynn or Paul Manafort. As for Peter Strzok, the top FBI agent was “directly involved” in all of those decisions but the report notes “he was not the sole, or even the highest-level, decision maker as to any of those matters.”

Instead, that job fell to Bill Priestap, the FBI’s counterintelligence division chief, whom the IG concluded used his “exercise of discretion in opening the investigation” and “was in compliance with Department and FBI policies. The IG “did not find documentary or testimonial evidence that political bias or improper motivation influenced his decision.”

Carter Page was only Trump official under FISA surveillance

The IG found no evidence that the Crossfire Hurricane team sought or obtained FISA warrants on any other subjects of the investigation besides Page.

Papadopoulos, a former unpaid Trump campaign adviser whose interactions with a suspected Russian agent are what ultimately led the FBI to open the Russia probe, has repeatedly claimed that the Crossfire Hurricane team sought and obtained a FISA warrant to surveil him. And CNN reported in 2017 that Trump campaign chairman Paul Manafort was under FISA-authorized surveillance before and after the election.

Former National Security Adviser Michael Flynn had his calls with the former Russian ambassador Sergei Kislyak intercepted by the intelligence community, leading some to suspect he was under surveillance.

Horowitz found that the Crossfire Hurricane team omitted several important details from their applications for a FISA warrant on Page, “including information the FBI had obtained from another U.S. government agency detailing its prior relationship with Page.”

That information included the relevant fact that Page, Horowitz wrote, “had been approved as an ‘operational contact’ for the other agency from 2008 to 2013,” and that he had informed that agency about his previous interactions with “certain Russian intelligence officers.” An FBI lawyer apparently altered an email from the other government agency by inserting the words “not a source,” Horowitz found, leading a supervisory agent to sign off on the third warrant renewal for Page without disclosing his past relationship with the other agency.

The team also overstated Steele’s reliability, Horowitz said, as well as the reliability of one of Steele’s sources—who Steele told the team was a “boaster” and an “egoist” prone to “embellishment,” according to Horowitz.

Page’s statements to an FBI confidential human source in August 2016—in which he said he had never met or spoken with Manafort—were also omitted, Horowitz found, as were his denials about meeting with the Russian officials cited in Steele’s reporting.

The FBI dropped Steele as a confidential source after he admitted to the bureau in November 2016 that he’d been a source for a Mother Jones story published that Halloween. That article suggested the intelligence official was helping U.S. officials investigate whether Russians were trying to develop a secret relationship with Trump and develop him as an asset.

But that didn’t stop the FBI from continuing to lean on Steele — DOJ attorney Bruce Ohr met with the bureau 13 times to pass on information from the intelligence operative — even amid dissent from their counterparts at the CIA.

According to Horowitz’s report, Steele’s information “was a topic of significant discussion” between the FBI and other intelligence agencies at the end of 2016 as the federal government tried to size up Russia’s intentions during the presidential campaign. The CIA expressed concern about the FBI’s vetting of Steele’s materials and urged it to be left out of a comprehensive intelligence community report. An FBI intelligence section chief told the IG’s investigators that the CIA saw Steele as trafficking in “internet rumor.” But the FBI still included the materials.

In their attempts to assess Steele’s credibility, the IG reported that FBI officials traveled overseas in November and December 2016 to meet with Steele’s professional contacts and people who knew him and collected information “both positive and negative.” Those findings didn’t go into his source file.