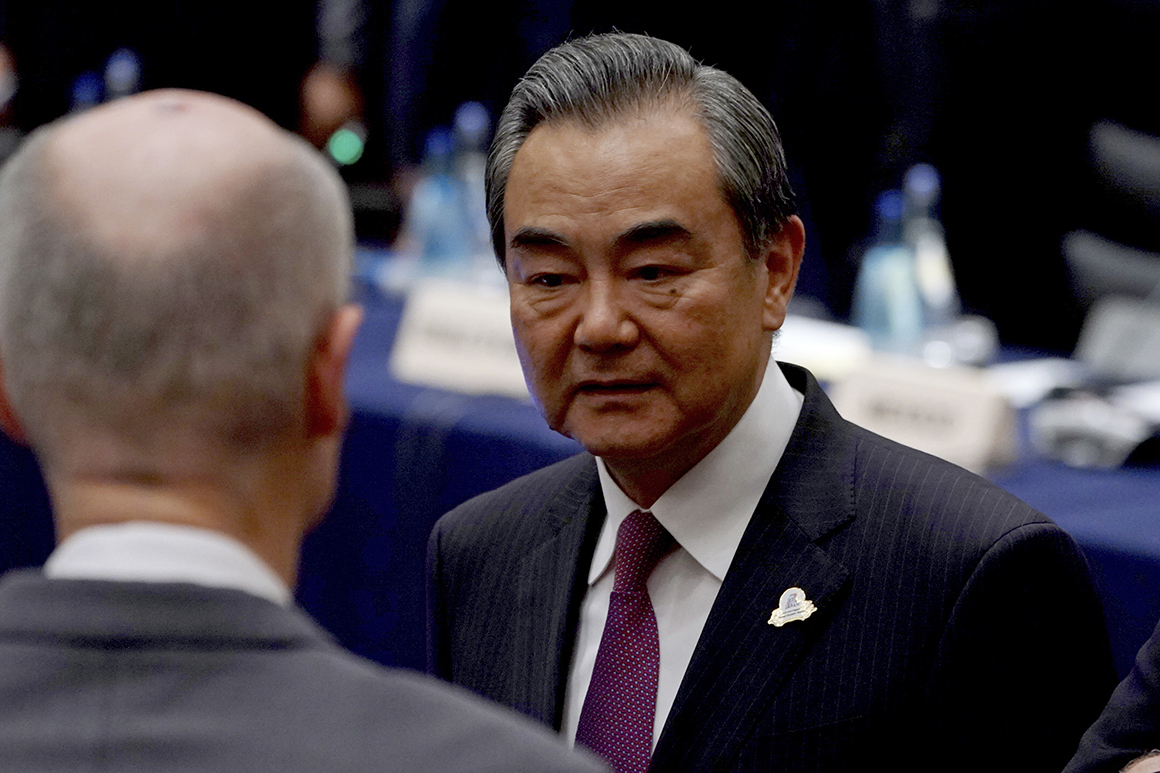 The tactic comes as China’s Foreign Minister Wang Yi has reportedly urged his diplomats to adopt a “fighting spirit.” It’s also loaded with irony: China’s government blocks the vast majority of its own citizens from using Twitter, and China itself is accused of numerous hypocrisies and human rights abuses, not the least of which is its detention of more than a million Uighur Muslims. Beijing also is in a standoff with pro-democracy activists in semi-autonomous Hong Kong who resent its growing encroachment on their freedom.

It’s not clear if the Chinese were inspired specifically by Trump’s pugilistic use of Twitter, and it’s far from certain whether echoing him will help China’s cause in the long run. But analysts the harsh new Chinese tone, which is often expressed in English, suggests at the very least that Communist Party leaders believe they must do more to control the narrative about their country — and that Twitter is a critical battleground.

“The Chinese Communist Party sees itself as in a global information war,” said Bill Bishop, who helms the widely read Sinocism newsletter about China. “They feel like their international discourse power is significantly smaller than it should be.”

The new Chinese effort appears to rely heavily on an old tactic, used extensively by the Soviets during the Cold War, called “whataboutism”: pointing out another nation’s problems as a way to deflect from one’s own.

“Forget native Indians’ tears&blood? US politicians like @SpeakerPelosi so ignorant&hypocritical to talk about ‘conscience’,” the Chinese Foreign Ministry spokesperson’s official account tweeted recently, referring to House Speaker Nancy Pelosi’s criticism of the mistreatment of the Uighurs.

It goes on to insist: “Ethnic minorities in China enjoy equal rights and freedom in religion and culture. China’s ethnic policy is more successful!”

Trump administration officials are tracking the shifting Chinese approach online. They stress, though, that the change is more about tone than substantive positioning on issues.

The Chinese Communist Party, after all, has long relied on propaganda. That includes state-controlled or state-aligned media outlets such as the Xinhua News Agency or the Global Times, a hawkish tabloid known for its aggressive anti-American rhetoric. China also is known to invest in media outfits worldwide, especially those that cater to the Chinese diaspora, to influence thinking in those communities.

U.S. officials are wary of getting into a Twitter war with Beijing. When it comes to the Chinese diplomatic attacks online, “We’re going to answer by effectively explaining our position within a framework that’s very measured and reasonable, and we’ll see how they respond,” one senior Trump administration official told POLITICO.

Trump himself is an outlier in his administration when it comes to aggression on Twitter. He’s used it to pressure and flatter Chinese leader Xi Jinping to reach a trade deal amid an escalating, tariff-driven economic conflict between the two countries.

“I say openly to President Xi & all of my many friends in China that China will be hurt very badly if you don’t make a deal because companies will be forced to leave China for other countries. Too expensive to buy in China. You had a great deal, almost completed, & you backed out!” Trump tweeted in May.

I say openly to President Xi & all of my many friends in China that China will be hurt very badly if you don’t make a deal because companies will be forced to leave China for other countries. Too expensive to buy in China. You had a great deal, almost completed, & you backed out!

Perhaps due to his desire to secure a trade deal, Trump largely avoids commenting on other issues, especially human rights-related ones such as the Uighurs or the situation in Hong Kong. He stalled for days before signing a widely backed new bill from Congress aimed at holding Beijing accountable for human rights abuses in Hong Kong.

Others in the Trump administration, such as Secretary of State Mike Pompeo and Vice President Mike Pence, have taken on sensitive topics such as human rights in China head-on. (“The dream of freedom remains distant for the Chinese people,” the vice president said in a speech last year.)

Still, they’ve largely stuck to speeches and carefully worded social media comments that are a far cry from the belligerent language now being used by Zhao and other Chinese officials.

In a speech at the Hudson Institute in late October, Pompeo took a shot at China’s information strategy. He said that Chinese state-run media and government spokespeople are “routinely maligning American intentions and policy objectives.” But Pompeo also indicated that the Chinese approach has worked over time because the U.S. has been slow to wake up to the dangers the Communist Party poses to the world.

“They distorted how Americans view the People’s Republic and how they review General Secretary Xi.” he said. “Today, we’re finally realizing the degree to which the Chinese Communist Party is truly hostile to the United States and our values, and its worse deeds and words and how they impact us.”

The Chinese Embassy in Washington did not reply to an email seeking comment. Like other Chinese embassies, it has beefed up its online presence over the past several months, including creating a Twitter account for its ambassador, Cui Tiankai.

Tiankai, who studied at Johns Hopkins University’s School of Advanced International Studies, is an old hand more cautious with his words than Zhao. But even he has been willing to strike a sharp tone on Twitter.

He’s pushed back, for instance, against allegations that China is trying to erase the culture and way of life of Uighur Muslims in Xinjiang province, arguing that the government is merely trying to eliminate terrorist activity in the region.

Human rights groups and investigative reporters have found evidence of torture and brainwashing of Uighurs at camps that China calls “vocational education and training centers.” A Pentagon official said in May that as many as 3 million people may be detained, assertions Chinese officials like Tiankai insist are overhyped.

“The life of local people of all ethnic groups in #Xinjiang has returned to normalcy,” Tiankai wrote this past week. “Facts are facts. No matter how much ‘fake news’ is generated, no matter what absurd numbers are fabricated by those rumormongers. Ultimately, facts will always prevail over lies.”

Zhao, who lists his title as the deputy director general of the Foreign Ministry’s information department, did not respond to direct messages seeking comment via Twitter. He follows more than 182,000 accounts, and has more than 220,000 followers.

Zhao previously served in a senior role in China’s embassy in Islamabad, Pakistan. While there, he became prominent on Twitter, using heated language to defend his country or attack others.

Over the summer, he tweeted that white people avoided certain neighborhoods in Washington, D.C. because they were heavily populated by blacks and Latinos. “There’s a saying ‘black in & white out’, which means that as long as a black family enters, white people will quit, & price of the apartment will fall sharply,” he wrote.

That prompted Susan Rice, who served as national security adviser to former U.S. President Barack Obama, to denounce him a “racist disgrace.”

Zhao deleted that tweet. But it didn’t seem to hurt his job prospects; if anything, analysts say, it might have helped him get promoted to his new role. In the new position, he’s repeated similar criticisms of racial segregation in the U.S. capital.

Analysts said Zhao’s rise suggests China is using him as a test-case.

“It appears that some people have been given license to be much more aggressive in ways that one certainly wouldn’t have associated with standard Chinese diplomatic practices as of 10 years ago,” said Sophie Richardson, a China expert at Human Rights Watch.

Rush Doshi of the Brookings Institution, who is working on a report about China’s global information influence operations, said that in years past, traditional Chinese propaganda strategy revolved largely around promoting positive stories about China as opposed to negative attacks on others. But there has been a growing debate in Chinese circles about which method works best.

Doshi and other analysts, however, stressed that the troll-like approach could backfire in the long run, damaging China’s image and even making it look silly on the world stage.

In late October, for instance, Zhao drew ridicule for declaring that the “reincarnation of Living Buddhas including the Dalai Lama must comply with Chinese laws & regulations.”

“Yes,” read one reply, “The supernatural must conform to Chinese laws & regulations. Obviously.”