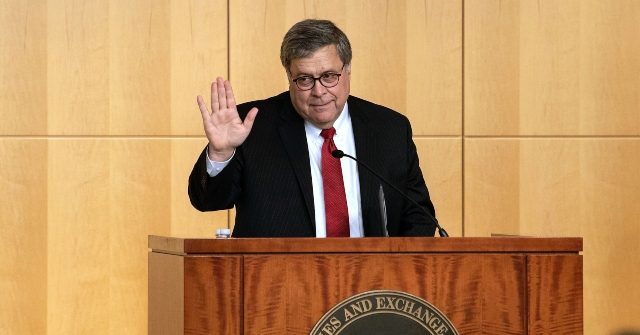 Attorney General William Barr released a statement on Monday following the release of the Justice Department’s inspector general (IG) report, asserting that it “makes clear that the FBI launched an intrusive investigation of a U.S. presidential campaign on the thinnest of suspicions that, in my view, were insufficient to justify the steps taken.”

The IG report released on Monday essentially concluded that the FBI possessed an “authorized purpose” to investigate the 2016 Trump campaign but conceded that the Bureau took a number of missteps and committed a series of wrongdoings in the process. The report specifically cites “significant inaccuracies and omissions” in the bureau’s application to surveil Carter Page, a former Trump campaign adviser. It also concluded that the political biases of employees did not play a role in the opening of the investigation.

As part of our review, we also sought to determine whether there was evidence that political bias or other improper considerations affected decision making in Crossfire Hurricane, including the decision to open the investigation. We discussed the issue of political bias in a prior OIG report, Review of Various Actions in Advance of the 2016 Election, where we described text and instant messages between then Special Counsel to the Deputy Director Lisa Page and then Section Chief Peter Strzok, among others, that included statements of hostility toward then candidate Trump and statements of support for then candidate Hillary Clinton. In this review, we found that, while Lisa Page attended some of the discussions regarding the opening of the investigations, she did not play a role in the decision to open Crossfire Hurricane or the four individual cases.

The report has individuals of both sides of the political aisle claiming victory.

Barr released a statement, asserting that the report found that “the FBI launched an intrusive investigation of a U.S. presidential campaign on the thinnest of suspicions that, in my view, were insufficient to justify the steps taken.”

“Nothing is more important than the credibility and integrity of the FBI and the Department of Justice. That is why we must hold our investigators and prosecutors to the highest ethical and professional standards,” his statement reads in part.

The Inspector General’s report now makes clear that the FBI launched an intrusive investigation of a U.S. presidential campaign on the thinnest of suspicions that, in my view, were insufficient to justify the steps taken. It is also clear that, from its inception, the evidence produced by the investigation was consistently exculpatory. Nevertheless, the investigation and surveillance was pushed forward for the duration of the campaign and deep into President Trump’s administration. In the rush to obtain and maintain FISA surveillance of Trump campaign associates, FBI officials misled the FISA court, omitted critical exculpatory facts from their filings, and suppressed or ignored information negating the reliability of their principal source. The Inspector General found the explanations given for these actions unsatisfactory. While most of the misconduct identified by the Inspector General was committed in 2016 and 2017 by a small group of now-former FBI officials, the malfeasance and misfeasance detailed in the Inspector General’s report reflects a clear abuse of the FISA process.

Barr added that the Department of Justice and FBI are “committed to taking whatever steps are necessary to rectify the abuses that occurred and to ensure the integrity of the FISA process going forward”:

No one is more dismayed about the handling of these FISA applications than Director Wray. I have full confidence in Director Wray and his team at the FBI, as well as the thousands of dedicated line agents who work tirelessly to protect our country. I thank the Director for the comprehensive set of proposed reforms he is announcing today, and I look forward to working with him to implement these and any other appropriate measures.

With respect to DOJ personnel discussed in the report, the Department will follow all appropriate processes and procedures, including as to any potential disciplinary action.”

U.S. Attorney John Durham, who is leading the Justice Department’s review of the origins of the Russia investigation, also released a statement, noting that he does “not agree with some of the report’s conclusions as to predication and how the FBI case was opened”: