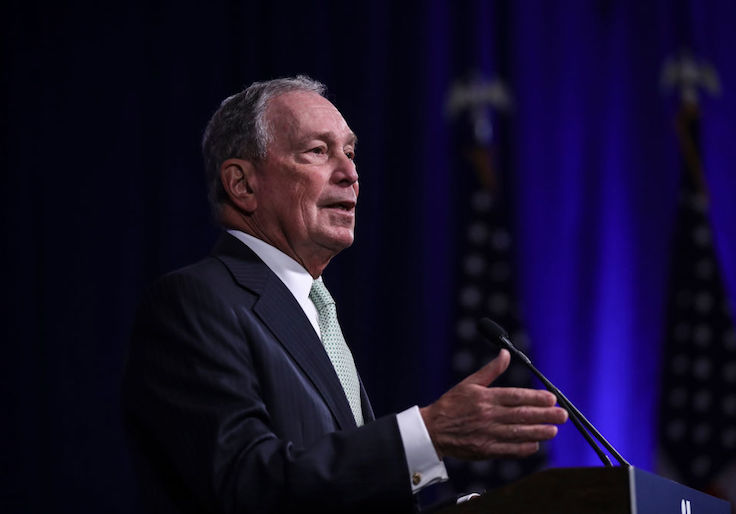 Michael Bloomberg, who has spent years bankrolling the gun-control movement, fumbled facts and made muddled claims on how gun laws work while laying out his campaign’s gun-control plan on Thursday.

Bloomberg appeared to misunderstand what the FBI’s firearms background check system does, seemed to make up a new “loophole” in federal gun laws, and made questionable claims about gun use among young people during a campaign speech in Aurora, Colo.

Despite spending hundreds of millions of dollars boosting the gun-control movement, Bloomberg’s comments suggest he lacks a basic familiarity with the details of firearms laws, sales, and operation. Thursday’s strange claims are just the latest example of Bloomberg demonstrating an apparent confusion about an issue he has described as his “life’s work.”

Thursday’s speech featured Bloomberg endorsing universal background checks, an expanded definition of domestic abuser under federal gun laws, a 48-hour waiting period on all gun purchases, and a “red flag” law. Bloomberg also proposed a system of government-issued permits for firearms, saying it would “allow authorities to screen applicants for dangerous behavior” and claimed the current system has no way of stopping people “from getting a gun when they’re a minor, when they have a criminal record, or when they have psychiatric problems.”

The FBI’s National Instant Criminal Background Check system, however, does verify whether anyone attempting to purchase a firearm from a gun dealer has a disqualifying criminal or mental health record. The process also verifies the purchaser is old enough to own the gun they’re trying to buy. Bloomberg did not say why he believes this system is inadequate or ineffective; his campaign did not respond to questions about this or other comments.

While defending his permit-to-purchase proposal, Bloomberg drew a confused analogy between requiring a permit to buy a gun and voter registration requirements.

“I know critics will say ‘Americans shouldn’t need a permit to exercise their constitutional rights,’ but voting is a constitutional right, and we require people to register to protect the rights of all citizens, and this is the exact same idea,” he said.

Unlike the right to keep and bear arms, the right to vote per se is not explicitly enumerated in the Constitution or its amendments. The federal charter only places limitations on what kind of voting rights restrictions can exist.

At the same time, connecting gun-right restrictions to voting-right restrictions may raise uncomfortable questions for skeptics of the latter, including those in Bloomberg’s party who rail against proposals like voter ID. In particular, the claim that a gun purchase permit would “allow authorities to screen applicants for dangerous behavior” is similar to the “good character” vouchers that historically allowed officials to deny someone the right to vote based on their subjective judgment of the would-be voter’s character. Such vouchers were outlawed during the Civil Rights Era due to their discriminatory misuse.

Bloomberg further promised to close a “loophole” that prevents “law enforcement from identifying felons and others who own guns illegally.” No such loophole appears to exist under federal law, and it is unclear exactly what Bloomberg is referring to.

While explaining his plan to ban 18- to-20-year-olds from purchasing guns, Bloomberg said the demographic should not be able to own guns because they are statistically more prone to violence than others and their suicide rate is rising.

“18- to-20-year-olds are four times as likely to commit a homicide compared to older Americans,” he said. “The suicide rate among teens has increased exponentially over the past decade.”

Bloomberg is correct that the teen suicide rate has risen since 1999: 13- to-19-year-olds had a suicide rate of 6.4 deaths per 100,000 teens in 1999, rising to 9.8 in 2017. But, CDC data show, firearm suicides are substantially more common among older Americans, with those under 20 being the least likely age group to commit suicide using a gun.

Bloomberg did not say that older Americans should be denied their gun rights on the basis of these comparatively higher suicide rates. He also did not say if he would ban other groups from exercising their constitutional rights based on demographic-level crime rates.

Thursday’s roll-out was closely watched by gun-rights groups. Many have cautioned that the mega-donor’s entrance into the race could bring media attention back to gun control after a decline in recent weeks.

The campaign event was also not the first time the billionaire misunderstood details of the gun-control proposals he champions. In a December 2012 interview with ABC News, Bloomberg appeared to not understand the difference between semiautomatic and fully automatic firearms, that the so-called assault weapons he wants to ban are semiautomatic, or that new sales of fully automatic firearms to civilians were banned in 1986. During the interview, he falsely insisted pistols and “assault weapons” are different because the latter are fully automatic.