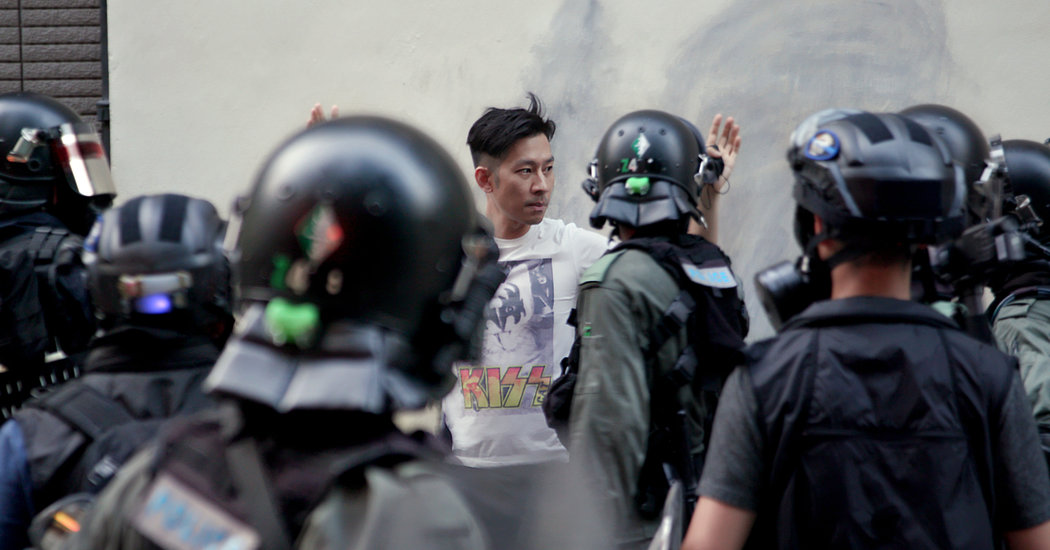 TAIPEI, Taiwan — Sporting T-shirts, tussled hair and backpacks, the trio slumped around a cafeteria table in the Taipei airport looked more like stranded students than a group of protesters on the run.

A few nights before, they were hurling Molotov cocktails on the front lines of the anti-government protests that have roiled Hong Kong for months. But after the police arrested two of their friends, they feared they would be next.

Desperate, they sent a cry for help to a private online group known for helping people escape to Taiwan. Within hours, they were on a plane to Taipei, the capital.

“We are fleeing the law,” said one of the protesters, her eyes darting across the food court. “We didn’t have much time to figure out what is happening.”

Leaving the airport, the group hopped into a black van and sped away, headed for an uncertain future.

They are among the more than 200 young protesters who have fled to Taiwan since the start of this year’s Hong Kong democracy movement, according to lawyers, pastors and other supporters who have helped them leave. The lawyers said dozens of protesters had arrived in recent weeks, after getting trapped on university campuses besieged by the police.

Their flight is being fueled by fear, as the street clashes between demonstrators and the authorities have grown more violent.

Demonstrators regularly face tear gas, batons and water cannons at the hands of the police. Embittered that the movement’s peaceful tactics didn’t work, some protesters have turned more aggressive, vandalizing buildings and throwing bricks at the police. Since the protests started in June, more than 5,000 people have been arrested, and hundreds have been charged and may face harsh sentences.

While many vow to fight indefinitely, a mounting climate of mistrust is prompting some demonstrators to leave Hong Kong.

They worry they won’t be treated fairly in court. Or they fear abuse in detention, citing allegations of sexual assault and rumors of torture. Others are seeking medical treatment in Taiwan, after learning of arrests taking place in Hong Kong’s hospitals. The protesters and organizers aiding the escapes stressed that certain details and identities must be kept secret, so as not to endanger the operation.

“They know that throwing a brick can land them up to 10 years in prison,” said Chris Ng, a lawyer who has been defending arrested protesters. “They have lost faith in the judicial system of Hong Kong.”

Mr. Ng said he had been in court hearings where protesters didn’t appear and probably had fled Hong Kong.

“Even if they are willing to accept the legal consequences, they do not trust — and with good reason — that they will be dealt with in a fair system, or receive a punishment proportionate to their crime,” Mr. Ng said.

Along the pipeline from Hong Kong to Taiwan, a clandestine network of sympathizers has sprung into action, quietly operating safe houses and orchestrating exits. Wealthy donors and aid groups are paying for airplane tickets. Volunteers are ferrying protesters to and from airports. Fishermen are selling boat rides for as much as $10,000 per person. Pastors are fixing smuggling routes for arrested protesters whose passports have been taken away.

“I am getting used to unexpected congregations,” joked Chun Sen Huang, an energetic 54-year-old pastor of the Chi Nan Presbyterian Church in Taipei who has emerged as a prominent player in the network.

The pastor works as a liaison, coordinating travel plans with organizers in Hong Kong, arranging accommodation at properties owned by churches and connecting protesters with lawyers, doctors, aid groups and schools throughout Taiwan.

These days, he said, he is constantly on his phone fielding requests, even during sermons and between prayers.

Mr. Huang said he recently learned of a protester who said she had been raped by the Hong Kong police and needed a boat to smuggle her to Taiwan so that she could receive an abortion.

At least 10 students arrived by plane after escaping from the campus of Hong Kong Polytechnic University, where the police and protesters were in a standoff for days. Mr. Huang connected them with a lawyer who helped them get temporary student visas through a Taiwan university.

A mother called, looking for a new guardian for her 14-year-old son, who had thrown Molotov cocktails.

Taiwan, a self-governing island, is a convenient and welcoming refuge. Like Hong Kong, it has a history of receiving dissidents from the mainland. While Beijing views Taiwan as part of China, Taiwanese leaders assert their sovereignty.

Many Taiwanese have supported the protests, concerned about the Chinese government’s encroachment on Hong Kong and what it means for the future of their own democratic island.

The protests were initially set off by outrage over an extradition bill, since withdrawn, that would have allowed Hong Kong’s leaders to send a fugitive to Taiwan to face murder charges, though the two entities have no extradition treaty. Protesters in Hong Kong said the legal change could have been used to send dissidents for trial in mainland China, where the courts are controlled by the Communist Party.

Even though Taiwan is welcoming protesters, the government is treading cautiously. It is wary of provoking Beijing by passing more permissive asylum laws. Many who arrive seeking refuge find themselves in a legal limbo, with only temporary visas.

During his 22 years as a pastor in Taiwan, Mr. Huang said, he has helped several dissidents flee persecution from the Chinese government, but has never seen an operation of this scale. He said it was reminiscent of “Operation Yellowbird,” a secret network that smuggled hundreds of dissidents out of China and into Hong Kong after the massacre in Beijing around Tiananmen Square in 1989. At the time, Hong Kong was still a British colony.

“Darkness can never defeat light,” said Mr. Huang, as he ushered five arrivals into the church. “I believe democracy and freedom will certainly defeat totalitarianism.”

For protesters considering whether to flee, the decision isn’t easy.

Ali, a senior at Hang Seng University, has been arrested twice, on charges that could carry a sentence of up to 10 years in prison. The second time, she said, she was held in a parking lot for 48 hours with 70 other protesters.

“There was no privacy,” Ali said. She recalled how male officers entered bathroom facilities unannounced, and how she could overhear other protesters being interrogated. “They charged me with rioting without giving any explanation,” she added.

While detained, she missed her first day of work as an associate teacher at a primary school and was fired. As she awaits trial, her dream of becoming a teacher is slipping away. “It’s like imagining a past life,” she said.

“My future is ruined,” Ali said from her grandmother’s living room, where she lives. “It makes me wonder what is left for me.”

Since her passport has been confiscated, she would have to rely on smugglers to take her by boat to Taiwan. Even then, she worries about leaving behind her 80-year-old grandmother. “She cannot take care of herself,” she said. “And I don’t know if I would be able to ever return.”

Groups of volunteers provide a financial lifeline for protesters looking to escape.

One 48-year-old social worker said she had paid for 11 protesters to get to Taiwan. With no children of her own, she said she feels a responsibility to help the young people.

“If I get arrested, at least I can be proud that I tried to help these youngsters against totalitarianism,” said the social worker, who spoke on condition of anonymity for fear of legal repercussions.

She started raising money for fleeing protesters in July, after a group of them stormed Hong Kong’s legislative building. She helped one 17-year-old whose parents had thrown him out of their home for joining the protests.

She mostly accepts donations in cash and in person — in order to avoid undercover police officers who sometimes pose as enthusiastic supporters. Almost every transaction begins with an encrypted private message to her phone and ends with a clandestine handoff.

“My mother always told me to repay old debts,” one donor wrote her one afternoon. She arranged to meet the stranger at a cafe. He handed her a cup of coffee with the equivalent of several thousand dollars coiled under its lid.

“The majority of Hong Kong people are unhappy,” she said.

“It’s not a small group of radical youngsters controlled and manipulated by the U.S.A.,” she added, citing one of Beijing’s claims that the West is provoking the protests. “The support is coming from all walks of life.”

When protesters arrive through regular channels, the government in Taiwan generally grants monthly visas, which are usually renewable. A group of Taiwanese lawyers called HK_TW Support is helping some protesters apply for asylum, which would allow them to stay indefinitely. But none of the applications have been approved yet, according to Jacob Lin, one of the lawyers who represents the group.

Daniel, a 22-year-old protester, has been living in Taiwan since July on an extended tourist visa. He describes his role in the early days of the movement as “fairly radical.”

After he stormed Hong Kong’s legislative building, his face was captured on surveillance footage. Two police officers stopped him on the sidewalk the next day and told him they recognized him.

“At that moment I realized I could no longer deceive myself,” Daniel said. “I really had to leave home.”

While he avoided arrest, he does not feel secure. He says he believes that his phone has been hacked and that he is being followed. His living costs are covered by a monthly stipend from an aid group in Hong Kong, but he fears the money won’t last. The stress has led him to see a psychologist, who diagnosed him with post-traumatic stress disorder.

The hardest part, Daniel said, is the ache he feels for everything he left behind. Just before he fled, he said, he found himself in tears, standing at the bottom of the steps to his house. It’s a moment he replays in his head again and again.

“I knew I might never come back to Hong Kong, and see home or my mother again,” he said.