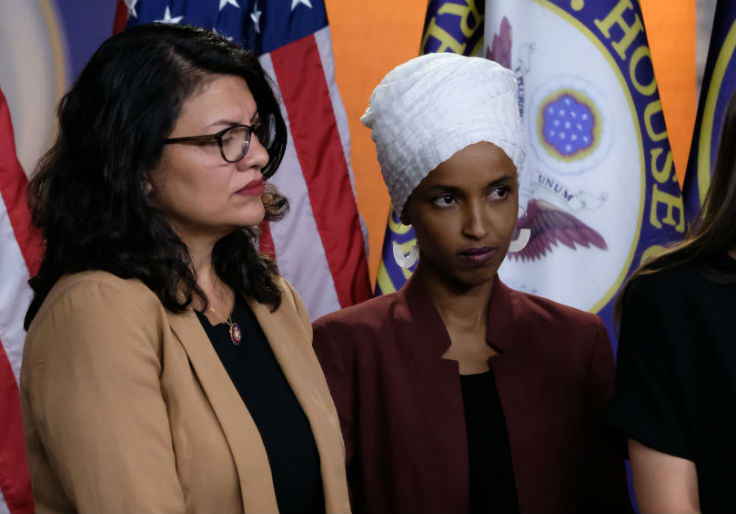 Representatives Rashida Tlaib (D., Mich.) and Ilhan Omar (D., Minn.) rejected an effort by their fellow Democrats to pass a resolution affirming the United States’ support for a two-state solution to the Israeli-Palestinian conflict.

During debate of a nonbinding resolution led by the Democratic Party, Tlaib rose to express her opposition, promoting anti-Israel conspiracy theories and rejecting the possibility of a two-state solution.

“This resolution not only endorses an unrealistic, unattainable solution, one that Israel has made impossible, but also one that legitimatizes inequality, ethnic discrimination, and inhumane conditions,” Tlaib said.

The resolution at hand emphasized the “special relationship between the United States and Israel” and maintained that the “United States remains unwavering in its commitment to help Israel address the myriad challenges it faces, including terrorism, regional instability, horrifying violence in neighboring states, and hostile regimes that call for its destruction.”

The resolution also called on the United States to help push the Israelis and Palestinians back to the negotiating table so that they can work out a two-state solution that “can both ensure the state of Israel’s survival as a Jewish and democratic state and fulfill the legitimate aspirations of the Palestinian people for a state of their own.”

Despite receiving support from nearly every Democrat in the House, Tlaib opposed the resolution and spread false information about Israel. Omar also came out against the resolution in its final form, stating on Twitter that while she endorsed the original resolution, its final form was insufficiently pro-Palestinian.

Both lawmakers objected to the removal of the word “occupation” from the resolution, a term used by Israel’s detractors to erode its legitimacy.

“I rise today as a proud granddaughter of a strong, loving Palestinian woman, and for me to stand up for her human dignity I must oppose House resolution 326,” Tlaib said.

Tlaib went on to accuse Israel of illegally seizing Palestinian homes and wrongly imprisoning Palestinian children, claims that also do not reflect the reality on the ground.

“Prime Minister [Benjamin] Netanyahu and the Likud Party have actively fought against a two-state solution and took steps to ensure its demise,” Tlaib claimed. “They increased their illegal taking of Palestinian homes and imprisoned more Palestinian children than ever before and are building walls right now to annex the West Bank and other Palestinian villages.”

Tlaib’s claims are demonstrably false in some cases and embellished in others.

Homes that have been demolished by Israel were found in a court of law to be a security concern, as they provide cover for suicide bombers and terrorists.

The homes “constitute a severe security threat and can provide cover to suicide bombers and other terrorists hiding among civilian population,” Gilad Erdan, Israel’s minister of public security, said in June following a decision by Israel’s Supreme Court.

As for the imprisonment of Palestinian children, the rise in that statistic correlates with the Hamas terror group’s use of juveniles in terrorist operations. The terror group, which controls the Gaza Strip, arms and trains children to conduct terror operations against Israel knowing they could be imprisoned or killed, making Israel look bad in the eyes of the international community.

Tlaib in her remarks also called Israel an apartheid state, another common refrain used by the anti-Israel community to erode the state’s legitimacy.

“Israel’s nation state law, which states that only Jews have the right to self-determination, has eliminated the political rights of the Palestinian people and effectively made them second class citizens,” she said. “Separate but equal didn’t work in our country and I can’t see it possible in other countries. Given our nation’s history of segregation, we should recognize when such injustices are occurring. We cannot be honest brokers for peace if we refuse to use the words ‘illegal occupation’ by Israel.”

In fact, Palestinians living in Israel are afforded the same rights as Israelis.

“The treatment of Arabs by the State of Israel cannot be compared in any way to the treatment of the black majority in South Africa under apartheid,” the Anti-Defamation League, a watchdog group that combats anti-Semitism, says in its primer on the matter. “There is no Israeli ideology, policy or plan to segregate, persecute, or mistreat the Arab population.”

Omar, in her rejection of the proposal, opposed an addition to the resolution that emphasized Congress’s “ironclad” support for some $38 billion in security assistance to Israel that is used to combat terrorist threats. Omar said this aid should be conditioned on Israel making concessions to the Palestinians.

The resolution was put to a voice vote in the House and passed.

However, Rep. Lee Zeldin (R., N.Y.), a leading pro-Israel voice, demanded a full count be conducted, leading to a final decision on the resolution being shelved until a later date.