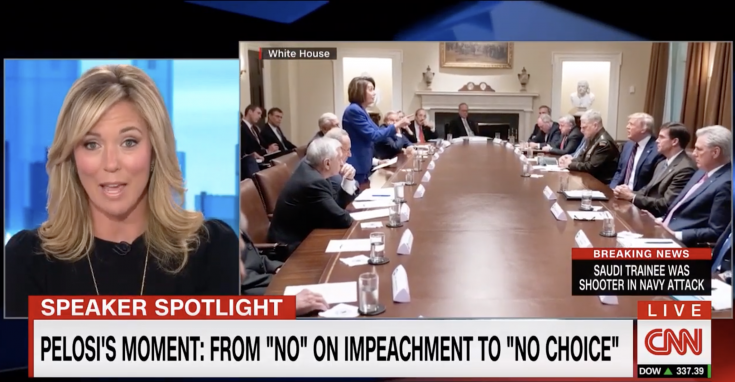 CNN dedicated 10 minutes of its Friday broadcast to heaping hagiographic praise on Speaker of the House Nancy Pelosi (D., Calif.).

Anchor Brooke Baldwin began a segment saying “Pelosi’s big moment is really a year in the making and it can be told through pictures.” She then listed news stories in which Pelosi received positive coverage, including Pelosi winning the speakership, confronting Trump in the Oval Office, her “clap that went viral” at the State of the Union, pointing a finger at Trump during a meeting at the White House, and exploding at a reporter when asked if she hated Trump.

Baldwin sought outside experts to verify Pelosi’s rockstar status. She turned to Christine Pelosi, daughter of the speaker and author of the book The Nancy Pelosi Way, to talk about the Democratic leader.

“So this is a historic moment for this country, certainly for your mother. Your tweet with the hashtag ‘don’t mess with mama’ has been trending. You know this woman better than anyone. Is this classic Nancy Pelosi? Is this the mom you’ve always known?” Baldwin asked.

In addition to asking Christine how great her mother was, Baldwin read a quote from Washington Post columnist Dana Milbank praising Pelosi’s political skills. Baldwin did not offer any pushback or raise contrarian viewpoints during the segment.

The segment resembled the press coverage that greeted Pelosi’s 2018 election to the House speakership, as well as her handling of a White House meeting before the government shutdown.