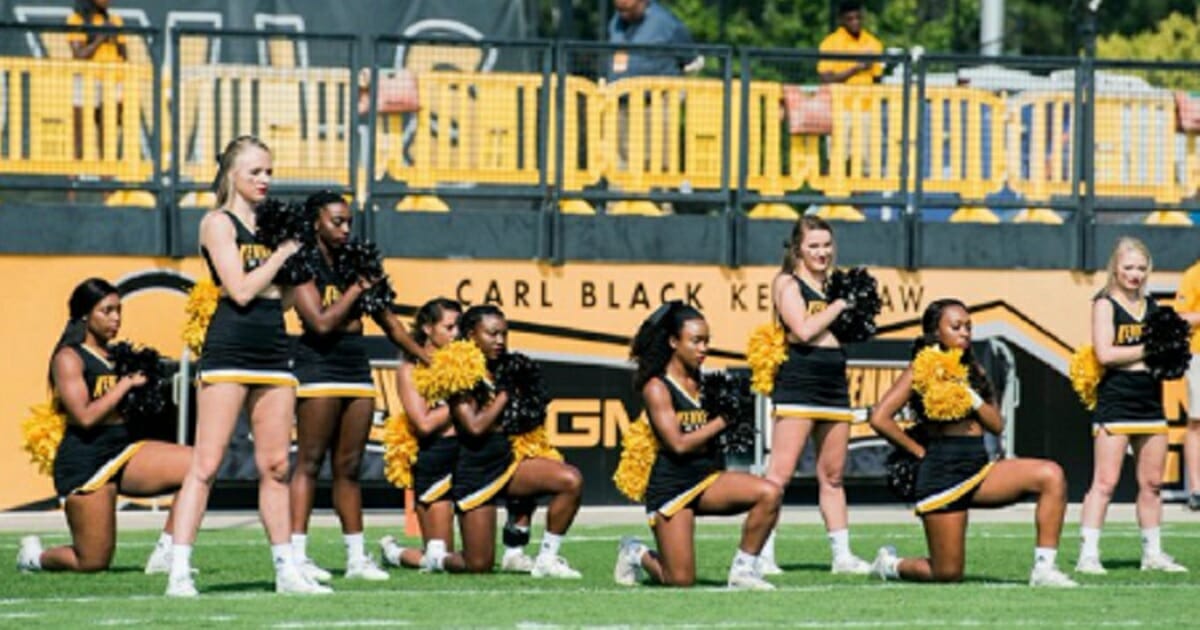 A former Kennesaw State University cheerleader who knelt during a national anthem in a 2017 protest is now richer for the experience.

Tommia Dean had sued in 2018 because she and four other cheerleaders who protested were ordered off the field and kept out of two games following their initial protest that sought to emulate the protest tactic of former San Francisco 49ers quarterback Colin Kaepernick, according to WKYC.

The cheerleaders were allowed to perform again after Georgia’s University System ruled that the protests were protected by the First Amendment, WKYC reported.

Tommia Dean, front center, is one of five cheerleaders who took a knee during the national anthem at a Kennesaw State University football game in 2017.PROUD OF ALL OF THEM WHO DEMONSTRATED THEIR CONSTITUTIONAL RIGHT TO PROTEST! pic.twitter.com/w7whCFBGuY

The suit has now been settled to the tune of $145,000, the Marietta Daily Journal reported. The agreement was reached last month, and shared with the newspaper through an Open Records Act request.

“A compromise has been reached,” the agreement stated, according to the newspaper.

“The intent of this agreement is to buy peace of mind from future controversy and forestall further attorney’s fees, costs, or other expenses of litigation, and further that this agreement represents the compromise, economic resolution of disputed claims and, as such, shall not be deemed in any manner an admission, finding, conclusion, evidence or indication for any purposes whatsoever, that the KSU defendants acted contrary to the law or otherwise violated the rights of Dean,” the agreement said, according to the paper.

The Georgia Department of Administrative Services will pay $93,000 to Dean, and $52,000 to her attorneys, according to the agreement.

Dean’s complaint said Warren and Ehrhart were racially motivated in their actions and that she suffered emotional distress.

In February, a federal judge dismissed the two men as defendants.

BREAKING: Part of KSU cheerleader’s lawsuit dismissed against sheriff, ex-lawmaker https://t.co/dU1rGow59W When you kneel during the National Anthem, you’re also disrespecting the men & women in uniform, past, present and future. Lawsuit should’ve been dismissed!

“The courts and Judge Batten have thrown out the meritless, politically motivated lawsuit against me and justice has prevailed. My counsel crushed the political hack attorneys hired by the KSU cheerleader to perpetrate this fraud and character assassination,” Erhart said at that time, according to the Marietta Daily Journal.

Dean’s lawyers have appealed that ruling in respect to Warren.

Is kneeling during the national anthem ever appropriate?

“The appeal is important because it calls into question when private parties can be liable under the civil rights laws of causing a public official or conspiring with a public official to violate a citizen’s First Amendment rights,” Bruce Brown, one of Dean’s attorneys, said, according to The New York Times.

Brown said that his client’s suit to defend her protest sent an important message.

“Kneeling during the national anthem is respectful and a completely appropriate protest that should be protected by the university under the First Amendment. It should not be prohibited or punished, ever,” he said.