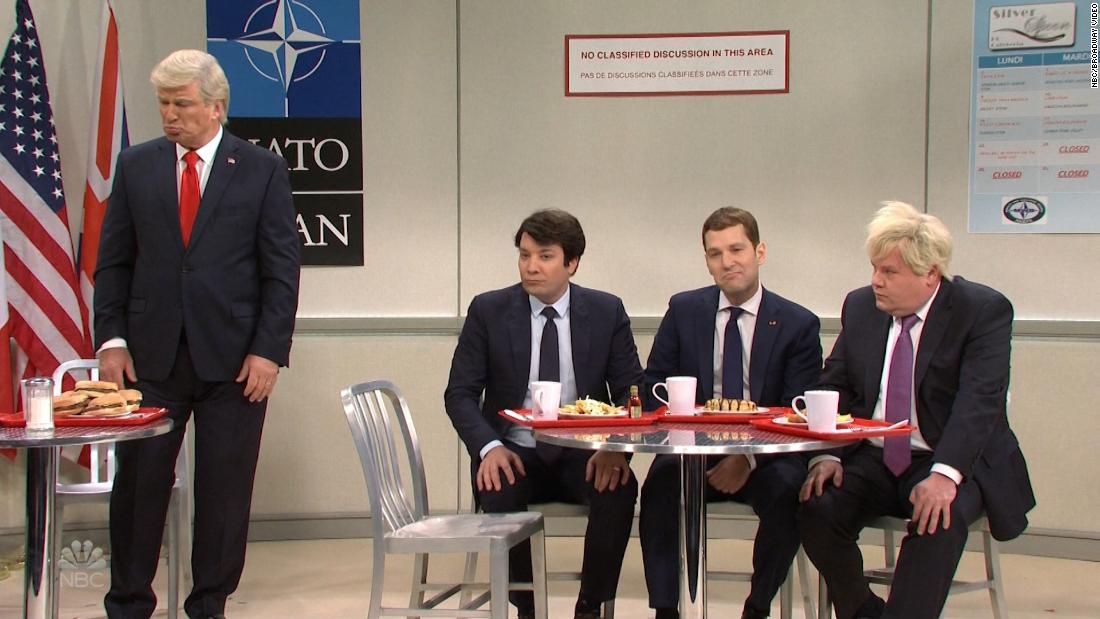 Trump, played by Alec Baldwin, was the nerd in SNL’s NATO high school cafeteria, playing on the actual drama taking place at the NATO summit this year.

Baldwin’s Trump desperately wants a seat at the table where there’s an obvious open seat, but the cool kids don’t want him at the table.

“Don’t make this harder than it is,” Corden’s Boris responds trying to play it cool in front of Fallon’s Trudeau and Rudd’s Macron.

They compliment Trump as he stands in front of him, but talk behind his back as he walks away.

Baldwin’s Trump then realizes he’s sitting at the losers table.

“Oh my God I’m at the loser table. I can’t believe they made me sit with the foreign kid,” Trump says.

He returns to the table asking, yet again, about the open seat, but the cool kids say it’s taken by German Chancellor Angela Merkel (Kate McKinnon).

“Am I actually about to sit at the cool kids table?” McKinnon’s Merkel says in disbelief.

Corden’s Boris then puts a sign on the back of Baldwin’s Trump that reads: “Impeach Me!!!”

The frame then freezes as First Lady Melania Trump (Cecily Strong) steps in to give a PSA about bullying.

“Bullying is a serious problem, especially against President Trump,” she says. “It’s not nice, he would never do it to you. So please, European leaders Be Best.”