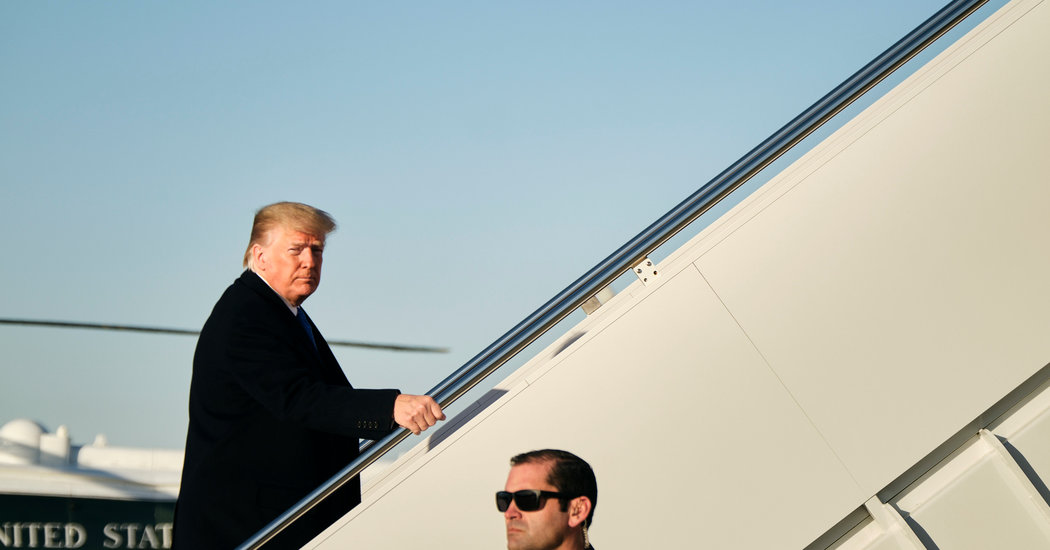 President Trump has now made obvious his contempt for the notion that Congress has any authority to hold him accountable. He has signaled that he won’t mount any defense to impeachment charges in the House over his scheming in Ukraine, insisting it is somehow beneath him to participate in a constitutional process.

If Mr. Trump is so clear in his own mind that he didn’t try to pressure the Ukrainian government to interfere in the 2020 election, why won’t he send the secretary of state, Mike Pompeo, to testify under oath that there was no quid pro quo? Instead, he has issued a blanket refusal to allow officials of his administration to testify or submit documents demanded by Congress. His approach is pitting Republican House members’ fealty to him against their respect for their own institution. They are making a fateful choice to diminish the House.

At an earlier time, such monarchical behavior from a president would have been met with bipartisan insistence on accountability to Congress and thus to the American people. With the power of the purse and a shared moral seriousness, a bipartisan majority in Congress would have brought the administration to its senses, if not to its knees, in a day. In any event, no previous president has taken the risk of provoking such congressional wrath. Richard Nixon was far more compliant with Congress, as was Bill Clinton. They felt like they had to be. And they felt like they should be. Those were different eras.

No doubt, Republicans fought tooth and nail to defend President Nixon during the Watergate scandal, as Democrats later fought to defend President Clinton during his impeachment in the Lewinsky affair. But in those previous eras members of Congress of both parties also recognized the gravity of their responsibility and brought far more open minds, not just their partisan identities, to bear on the evidence. Today’s Republican legislators have supported President Trump’s rejection of Congress’s independent authority by showing nothing but indifference to the alarming testimony of credible witnesses, and scorn for public servants who have had the courage to testify — an attitude that should be infuriating to anyone who expects legislators to honor their oath of office.

It’s impossible today to predict all the long-term consequences of shattering such norms of political behavior, which have functioned through American history as a sort of unwritten constitution, as the Yale legal scholar Akhil Reed Amar calls it. But it’s clear that Republican House leaders are, in effect, using a constitutional process meant to safeguard American democracy to instead further weaken it.

In the more immediate term, the people clearly need to hear from material witnesses like Mr. Pompeo and the former national security adviser, John Bolton, both of whom have been said by sworn witnesses to have firsthand knowledge of whether President Trump pressured the Ukrainian president to help him win the 2020 election. Their silence is its own form of negligence toward the public’s trust.

But rather than continue to pursue those witnesses through lengthy court fights, Democrats have made their own fateful choice, to press ahead with impeachment based on the evidence their inquiry has amassed so far. That testimony has established that the White House intervened to hold up military aid to Ukraine while demanding that the Ukrainian president announce corruption investigations into Joe Biden and his son, Hunter, as well as into the fantasy that Ukraine interfered in the 2016 American election; those investigations were the “favor” Mr. Trump requested in his July 25 call with the Ukrainian president.

House Democrats are now said to be divided over whether to frame articles of impeachment against President Trump strictly around the Ukrainian scheme, or to also include articles grounded in the report delivered by Robert Mueller, the special counsel in the investigation into the extent and nature of Russian interference in the 2016 elections.

The case for including the Russia matter runs like this: Mr. Mueller uncovered a clear pattern of obstruction by Mr. Trump, a pattern replicated in efforts to frustrate an investigation into the strong-arming of Ukraine.

To justify including articles related to the Mueller inquiry, though, Democrats would need to overcome a couple of common-sense obstacles. One of these is the obvious question of why, if the Mueller report detailed impeachable offenses, the Democrats didn’t move to impeach Mr. Trump when the report was delivered back in March.

Another question might be why, if the Democrats are as certain as they have said they are that the Ukrainian scheme itself represents an unconstitutional abuse of power, they would feel the need to add on the Russia affair just now — at what feels like the last minute. If the Russia background is so relevant, why didn’t they seek more testimony related to it during the recent public hearings?

There may be good answers to these questions. But so far, Democratic leaders have not articulated them. Their decision to press ahead with impeachment by the end of this year has only increased the burden on them to provide the clearest and most comprehensible account possible of high crimes by this president.

There’s no question that the Russia matter underscores that Mr. Trump embraces foreign meddling in support of his own political ambitions, and it can serve as important context as House members press their case. But if the case for impeachment on the Ukraine matter is as strong as the Democrats contend, the articles ought to focus on those issues. The acts of obstruction outlined in the Mueller report are serious, but the pressing matter is attempted interference in the 2020 election through Ukraine. “Where the president’s misconduct is aimed at corrupting elections, relying on elections to solve the problem is no safeguard at all,” concluded a report by the Democratic staff of the House Judiciary Committee released Saturday. If that is the strongest, clearest case for impeachment of the president, let the Senate consider that issue, and that issue alone.