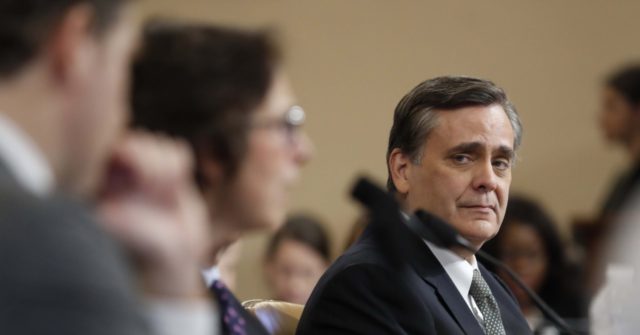 The House Judiciary Committee’s impeachment report Saturday on the constitutional and legal grounds for impeachment failed to cite any of the testimony from the “expert” witnesses who testified on Wednesday.

The report, signed by 20 members of the Democratic majority staff, appears to have been written in advance of that hearing. It was also prepared in advance of any evidentiary hearings in the committee, which are scheduled to begin Monday.

The report includes a caveat that its view are those of the staff, not the committee’s elected members.

One witness, University of North Carolina Law School professor Michael Gerhardt, is cited in the report, but the references are to his prior publications, not to his testimony in the hearing with two other Democratic witnesses.

Because it ignores the witnesses, notably the sole Republican-called witness, George Washington University professor Jonathan Turley (who is not, himself, a Republican), it fails to address the arguments they raised.

For example, the report argues that President Donald Trump can be impeached for “obstruction of Congress” for turning to the courts to prevent certain witnesses and documents from being provided to the House investigation.

As Turley argued on Wednesday:

I can’t emphasize this enough, and I’ll say it just one more time. If you impeach a president, if you make a “high crime and misdemeanor” out of going to the courts, it is an abuse of power. It’s your abuse of power. You’re doing precisely what you’re criticizing the president for doing. We have a third branch that deals with conflicts of the other two branches. And what comes out of there and what you do with it is the very definition of legitimacy.

The report fails to address that, and other objections.

As Breitbart News has noted, the report includes many legally, historically, and constitutionally dubious assertions, such as the claim that a president can be impeached for “legally permissible” conduct if his motives are “illegitimate.”

As precedent, the report cites the impeachment of President Andrew Johnson in 1868, which is widely viewed by historians and legal scholars as a mistake, and an abuse of the majority’s power in the House.