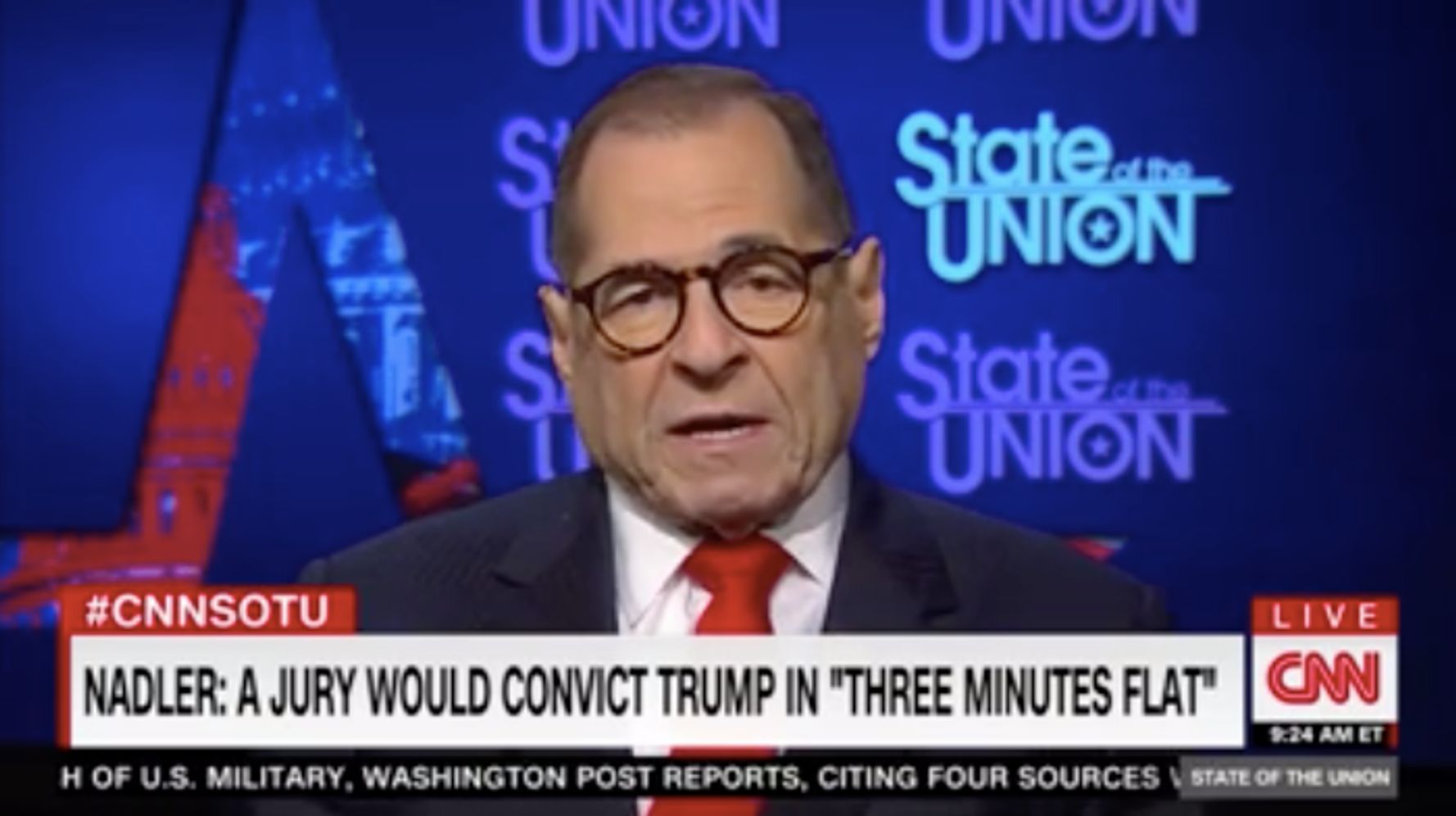 House Judiciary Chairman Rep. Jerry Nadler (D-N.Y.) on Sunday said the ongoing impeachment inquiry into President Donald Trump has produced a “rock solid case” against the president regarding his dealings with Ukraine.

“I think the case we have if presented to a jury would be a guilty verdict in about three minutes flat,” Nadler said during an interview on CNN’s “State Of The Union.”

He shrugged off Republicans who claim there’s no evidence to prove Trump withheld U.S. military aid to get Ukraine to publicly commit to investigating former Vice President Joe Biden, one of his Democratic rivals.

“All this nonsense about hearsay evidence ― there is considerable direct evidence,” Nadler said.

He added: “The reason we don’t have even more direct evidence is the president has ordered everybody in the executive branch not to cooperate with Congress in the impeachment inquiry, something that is unprecedented in American history and is a contempt of Congress by itself.”

“We have a very lock solid case,” @RepJerryNadler says about the House Democrats’ impeachment case. “The case we have if presented to a jury would be a guilty verdict in about three minutes flat.” https://t.co/TWeC2mhpgk #CNNSOTU pic.twitter.com/k5FzP1RYSM

The ongoing impeachment inquiry is set to continue in the House this week. Nadler said his committee on Monday would examine the House Intelligence Committee’s report, which was compiled after two weeks of public testimonies from witnesses.

Nadler said he would likely bring articles of impeachment before his committee this week, but would not specify how many or what they would say.

Asked whether Robert Mueller’s investigation into Russia’s interference in the 2016 election would be included, Nadler wouldn’t say.

“It’s all of a pattern,” he told CNN’s Dana Bash. “The central allegation is that the president put himself above his country several times, that he sought foreign interference in our elections several times ― both for 2016 and 2020 ― that he sought to cover it up all the time and that he continually violated his oath of office.”

“All this presents a pattern that poses a real and present danger to the integrity of the next election, which is one reason why we can’t just wait for the next election to settle matters,” he added.

Dem @RepJerryNadler tells @DanaBashCNN that he sees the Ukraine evidence as part of “a pattern” of conduct by President Trump, but would not commit to including the evidence of obstruction of justice included in the Mueller report as part of the articles of impeachment. #CNNSOTU pic.twitter.com/IZdpLdsRHM

Trump has repeatedly claimed he did nothing wrong by asking Ukrainian President Volodymyr Zelensky during a July 25 phone call to investigate Biden and his son. The call was the subject of a whistleblower complaint filed by a CIA analyst in August and became the centerpiece of the impeachment inquiry.

Several current and former State Department officials testified before the House Intelligence Committee last month that the White House used U.S. military aid as leverage to get Ukraine to publicly commit to investigating Biden, a frontrunner in the Democratic presidential primary.

If the House Judiciary Committee votes to move forward with articles of impeachment, the inquiry will move to the full House. House Democrats reportedly hope the impeachment vote will take place before Christmas so a Senate trial can begin in early 2020.