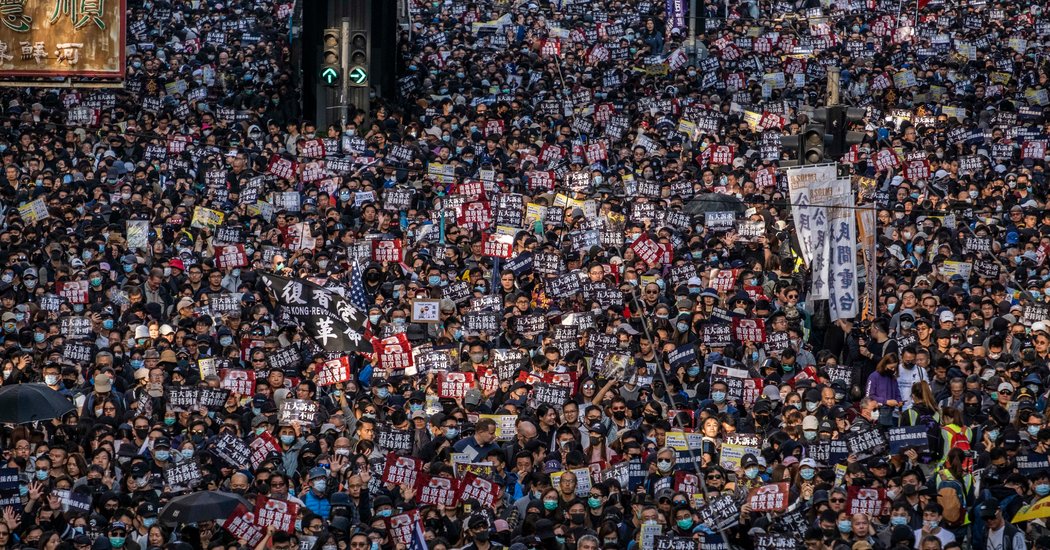 At sunset, a long stream of people continued to flood the streets, while squads of riot police officers waited near groups of protesters.

Tamara Wong, a 33-year-old protester, said the government’s refusal to listen to the people would only lend more legitimacy to the more confrontational protesters, although she did not expect the authorities to make further concessions.

“The government keeps talking about protesting peacefully, so protest peacefully we shall, today,” Ms. Wong said. “If the government still does not respond after today, then they will only be showing the world that they are not listening and that some violence on the protesters’ side can be justified.”

“Because what else can we do?” she added.

Police Seize Weapons Ahead of March

Earlier Sunday, the police said they had found a 9 millimeter semiautomatic pistol, five magazines, 105 bullets and two ballistic vests as well as fireworks, among other items, during a series of early morning raids.

Senior Superintendent Steve Li of the Hong Kong police said that officers had received information that the firearm and fireworks would be used on Sunday “to create chaos, including to shoot at police officers,” or to “hurt innocent bystanders” and pin the blame on officers.

In the wake of the now-withdrawn extradition bill, Ms. Cheng has become a deeply unpopular figure alongside Hong Kong’s chief executive, Carrie Lam. Ms. Cheng and Mr. Poon had also been previously embroiled in a scandal involving illegal construction in their mansion — a hot-button local issue.