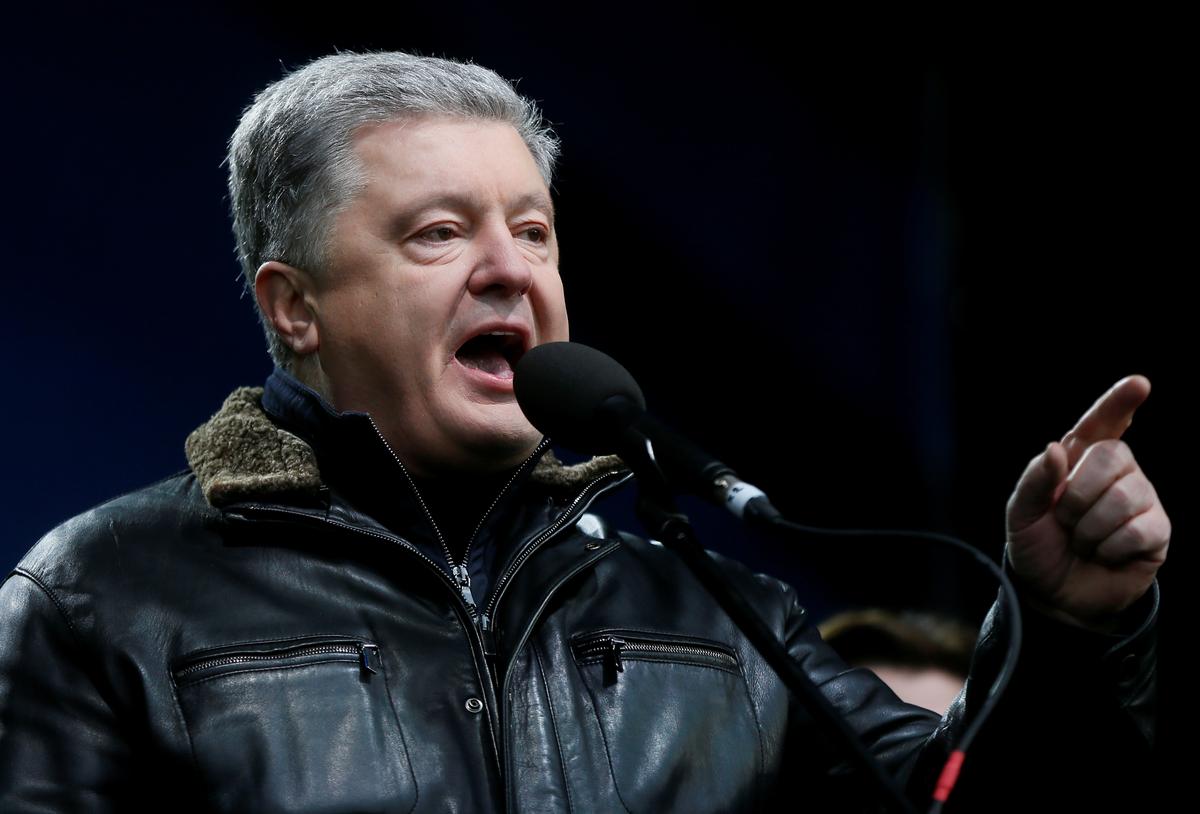 KIEV (Reuters) – Thousands of people gathered in the centre of Kiev on Sunday to send a message to Ukraine’s president, who meets his Russian counterpart on Monday, that Ukrainians will not accept a peace deal at the cost of the country’s independence and sovereignty.

Ukraine’s former President Petro Poroshenko delivers a speech during a rally ahead of the so-called “Normandy” format summit in Paris, where leaders of Ukraine, Russia, Germany and France will meet to discuss steps to resolve the conflict in eastern Ukraine, in Kiev, Ukraine December 8, 2019. REUTERS/Valentyn Ogirenko

“We are here because we are not satisfied with the peace at any costs … the peace at the costs of capitulation,” Inna Sovsun, a lawmaker of opposition Golos (Voice) party, told the rally.

President Volodymyr Zelenskiy and Vladimir Putin are meeting in Paris alongside the French and German leaders in a renewed effort to end a conflict between Ukrainian troops and Russia-backed forces in eastern Ukraine that has killed more than 13,000 people since 2014.

Zelenskiy, who won a landslide election victory in April promising to bring peace, said this week that his first face-to-face meeting with the Russian president would give Kiev a chance to resolve the more than five-year-old war in the Donbass region.

But many Ukrainians are concerned over a possible compromise with Russia, which they see as an aggressor seeking to restore the Kremlin’s influence on the former Soviet republic and ruin Ukraine’s aspiration to closer European ties.

The Ukrainian government wants to agree with Moscow on a sustainable ceasefire in Donbass, the exchange of all prisoners, and a timeline for the withdrawal of all illegal armed forces from regions under the control of Russia-backed separatists.

The leaders’ meeting was arranged after Ukraine and separatists withdrew their military forces from three settlements in Donbass – implementing agreements reached between Russian, Ukrainian and separatist negotiators in September.

Kiev also promised to grant a special status to territory controlled by the rebels and to hold elections there.

These plans, seen as a sign of Kiev’s capitulation, sparked protests in the Ukrainian capital..

According to an opinion poll of Ukrainians conducted by a think-tank Democratic Initiative and Kiev’s International Institute of the Sociology on Nov 4-19, 53.2% of respondents are against a special status for Donbass and 62.7% do not accept an amnesty for those who fight against the Ukrainian army.

“We are here so that the voice from Kiev can be heard in Paris. Friends, we cannot make any concessions to Putin until the last sliver of Ukrainian land is free,” ex-president Petro Poroshenko told Sunday’s rally.

Historian Volodymyr Vyatrovych said many centuries and recent years of Ukrainian history showed Kiev should not believe in a good will of Moscow.

“Zelenskiy’s new team seems to be returning to this erroneous strategy, which consists in the fact that we can agree with Russia,” he told the rally.