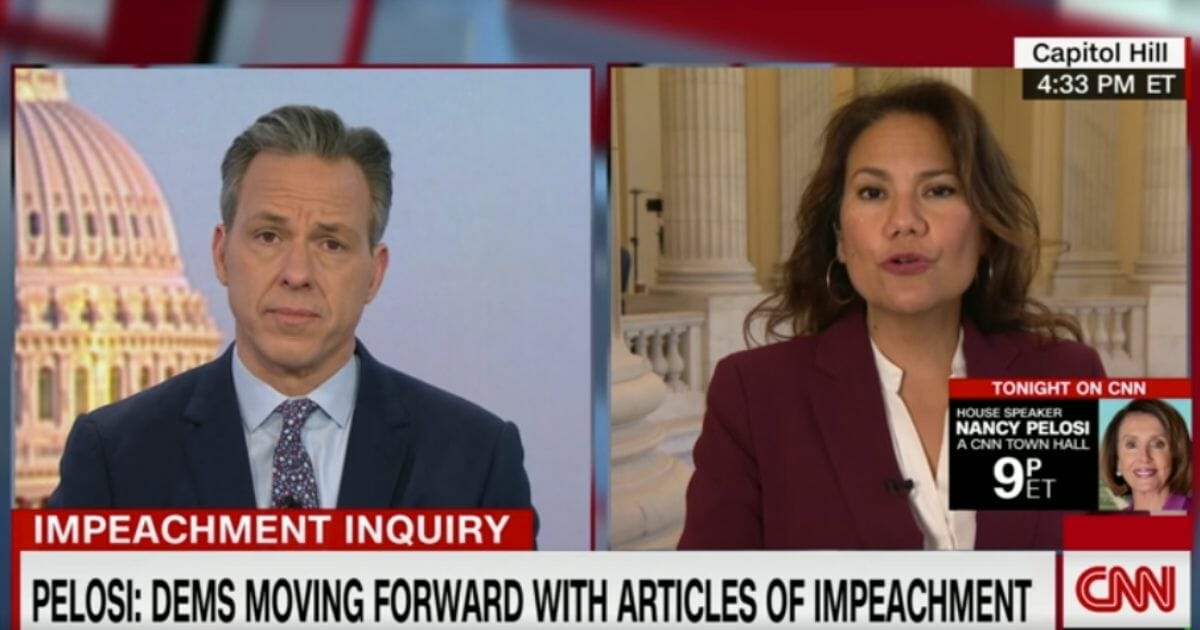 House Democrats have grown increasingly transparent in recent weeks with regard to their unwillingness to pump the brakes on impeachment and employ a more scrutinizing approach.

But Democratic Rep. Veronica Escobar of Texas took things a step further in a Thursday interview with CNN, warning against allowing the American people to review the facts of the Ukraine matter and decide for themselves — at the ballot box — whether President Donald Trump should be removed from office.

In other words, Escobar outright admitted the pedal had to be kept to the medal on impeachment because D.C. Democrats like herself are not confident the 2020 presidential election will see the Trump administration discontinued — something they’ve been desperately hoping for since Jan. 20, 2017.

“If you have a corrupt executive, who is willing to maintain power by corrupting our election, there is an urgency there,” Escobar told anchor Jake Tapper.

“We have already seen that the president has done everything possible to prevent us from getting access to all of the documents, all of the witnesses that we need to.”

TRENDING: Father of the Year Hunter Biden Must Now Give Burisma Financials to Court

“If we wait for the courts, if we wait for an election to settle this, then we will have waited too long,” Escobar said.

“I am worried in general about 2020,” Escobar later added.

“I believe that we are on a precipice, a very dangerous precipice, as a country in so many ways.”

Do you think the American people should have the final say over whether Trump remains president?

And Escobar is not the first Democratic congressman to express such dangerously hasty views on the impeachment proceedings that are currently underway.

In fact, Escobar seems to be taking her lead from House Intelligence Committee Chairman Rep. Adam Schiff, who claimed Tuesday there was a danger in waiting to review “every last fact” when asked in a news conference earlier this week why the unpopular political procedure at hand was being pursued at breakneck pace.

“There is,” Schiff said, as CNN reported, “grave risk to the country with waiting until we have every last fact, when we already know enough about the president’s misconduct to make a responsible judgement about whether we think that’s compatible with the office of the president.”

Dems have hit a new low. Shocking, I know.

Dems refuse to let facts lead their ridiculous investigation and NOW THEY ARE ADMITTING IT.

Can’t wait for the facts to come out when they have focused on impeaching President @realDonaldTrump since day one.

Of course, exchanges like these only reveal exactly what right-wing commentators and bolder conservative swamp-dwellers have been arguing all along.

This process has not been about facts, truth or justice.

And one would be right to laugh in the face of anybody willing to content it has anything to do with a reverence for America’s founding principles.

This is about little more than eliminating Trump from the political equation in the most efficient manner possible.

The fact that the left is willing — if not eager — to see that end met by abandoning the pursuit of any and all possible evidence, in a political process that directly mirrors a criminal investigation and trial, is beyond concerning.

But that’s just the way the cookie crumbles in political theater, apparently.

Only, this can’t even be considered political theater anymore — it’s a figurative book burning for the Constitution.