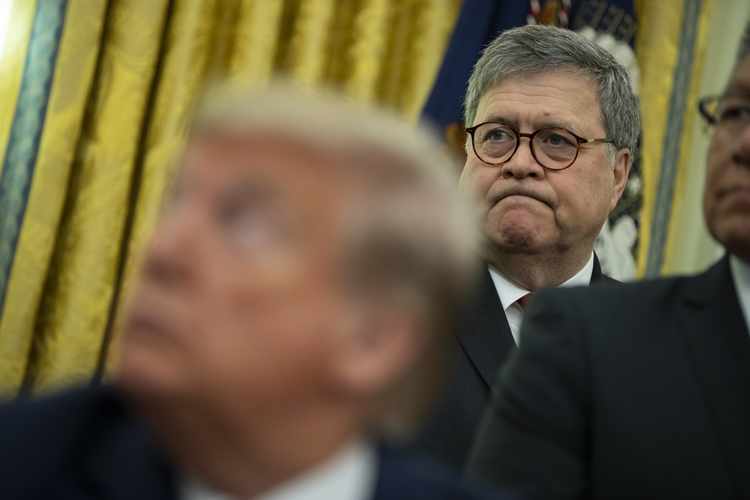 The Justice Department’s inspector general is expected to announce later this week that while the FBI acted unprofessionally, it had sufficient basis to investigate members of Donald Trump’s 2016 presidential campaign. Russia, after all, was interfering in the election and law enforcement needed to get to the bottom of it.

Back in April, I predicted this “Russia-made-us-do-it” excuse.

It has been reported that Attorney General William Barr disagrees with this conclusion, based in part on U.S. Attorney John Durham’s criminal investigation into the origins of the Russia probe. The IG performed a limited in-house review that could not explore the larger questions of alleged Russian interference. Durham’s inquiry, in contrast, has authority to investigate whether the Russia saga was a false flag operation launched by the Democratic National Committee, using the CIA and friendly governments around the world, particularly the Western puppet in Ukraine.

Here are the known facts.

In 2010, Viktor Yanukovych was elected as president of Ukraine. Three years later he would make the mistake of not signing an association agreement with the European Union. John McCain flew to Kiev to rally support for the EU. McCain reported to the Atlantic Council about his trip. President Obama told CNN’s Fareed Zakaria that he had “brokered a deal to transition power in Ukraine.” The word “brokered” suggests that the Obama administration successfully replaced a government half a world away at the behest of Washington’s smart people.

Vice President Joe Biden took control of anti-corruption efforts in the country while his son Hunter received up to $3 million from a large Ukrainian energy company only months after being discharged from the U.S. Navy for drug use.

Letting Hunter fleece an impoverished nation to buy strippers and cocaine because his dad was in charge was a side-benefit to the arrangement. The bigger prize was that political control made possible what is always the real payoff of machine politics: manipulating elections.

There can be little doubt, at this point, that Ukraine attempted to interfere in the 2016 U.S. presidential election on behalf of the Washington establishment’s preferred candidate, Hillary Clinton. As I noted in March, Politico ran a piece headlined “Ukrainian Efforts to Sabotage Trump Backfire” on January 11, 2017, reporting that Alexandra Chalupa, a Ukrainian-American operative, began doing opposition research for the DNC on Trump in late 2015. The piece concluded that, “The Ukrainian efforts had an impact in the race, helping to force [Paul] Manafort’s resignation and advancing the narrative that Trump’s campaign was deeply connected to Ukraine’s foe to the east, Russia.”

There is little doubt, either, that the Obama administration worked closely with Chalupa.

CIA Director John Brennan hand-picked one of his agency’s young analysts, Eric Ciaramella, to join President Obama’s National Security Council in 2015 as director for Ukraine. Paul Sperry has reported that Ciaramella is the person most likely to have filed a whistleblower complaint against President Trump.

The national media has mostly scolded those who would deal in such reporting, which is a tell. It means they’re onto something. What could that be? Well, if it is Ciaramella, he is not a whistleblower as that term is commonly understood. He is a mole who has tried to use his position in the federal bureaucracy to undermine the president. Sperry has reported that Ciaramella and Chalupa were part of “an effort to link the Republican campaign to the Russian government.”

Trump was falsely linked to Russia by three distinct items of DNC opposition research, all connected to Ukraine: (1) dirt on Paul Manafort; (2) the Steele dossier; and (3) the supposed hack of the DNC computers.

In emails that Fusion GPS’s Nellie Ohr forwarded to her husband Bruce Ohr, Ukrainian officials informed the FBI of a “black ledger” registering off-the-book payments to Manafort, who resigned as chairman of the Trump campaign over the disclosure. Fusion GPS is the opposition research firm that hired former British spy Christopher Steele to assemble a dossier about Trump’s connections to Russia.

Although Steele’s report doesn’t name his sources, it is known that he did not go to Russia, a country he hadn’t visited in years. Did he work the phones with old Moscow contacts? Perhaps. Another plausible assumption is that the Steele dossier, like Nellie Ohr’s report about Manafort, was based on information provided by Ukrainians that was passed to Steele by his Fusion GPS researchers. The only source Nellie Ohr has identified in testimony  is Ukrainian.

Finally, there is the allegation that Trump had something to do with the DNC “hack,” a charge that also comes from a DNC contractor with ties to Ukraine.

In March 2016, John Podesta surrendered his emails in a phishing scheme. The emails showed the Clinton campaign coordinating, sometimes in underhanded ways, with the Democratic National Committee to rig the nominating process against Bernie Sanders. A short time later, as the DNC scrambled to formulate an explanation for the impending leak of damaging emails, its servers were hit with a malware attack.

The hackers left what appear to be deliberate and amateurish Russian signatures. As one American computer security expert has noted after reviewing the available evidence:

The PHP malware sample they have provided appears to be P.A.S. version 3.1.0 which is commonly available and the website that claims to have authored it says they are Ukrainian. It is also several versions behind the most current version of P.A.S which is 4.1.1b. One might reasonably expect Russian intelligence operatives to develop their own tools or at least use current malicious tools from outside sources.

Incredibly, the DNC did not provide its allegedly hacked computers to the FBI for inspection. The inspection was done by CrowdStrike, a private contractor paid by the DNC. CrowdStrike concluded not only that Putin was responsible for the malware attack, but also that he must have been behind the earlier phishing scheme—even though no direct evidence connects the two.

FBI Director James Comey confirmed in testimony to the Senate Intelligence Committee in January 2017 that these weren’t ideal law enforcement procedures. “We’d always prefer to have access hands-on ourselves if that’s possible,” he said. But the DNC rebuffed the FBI’s request to inspect the hardware. Comey added that the DNC’s hand-picked investigator, CrowdStrike, is “a highly respected private company.”

What he left out was that CrowdStrike is also a company with deep connections to Ukraine. CrowdStrike’s chief technology officer and co-founder, Dmitri Alperovitch, is a Russian expat and a senior fellow at the Atlantic Council. The Atlantic Council’s list of significant contributors includes Ukrainian billionaire Victor Pinchuk, who also donated between $10 million and $20 million to the Clinton Foundation. The Ukraine energy company that was paying Hunter Biden, the Burisma group, also appears prominently on the donor list.

Arseniy Yatsenyuk, the Western puppet installed after the Obama administration “brokered” his succession to power, visited the Atlantic Council’s Washington offices to make a speech weeks after the coup.

Those who assert that it is a “conspiracy theory” to suggest that CrowdStrike would fabricate the results of computer forensic testing to create a false Russian flag for Ukraine should note that it was caught doing exactly that around the time it was inspecting the DNC computers. On Dec. 22, 2016, CrowdStrike caused an international stir when it claimed to have uncovered evidence that Russians hacked into a Ukrainian artillery computer app to help pro-Russian separatists. The Voice of America later determined the claim was false, and CrowdStrike retracted its finding. Ukraine’s Ministry of Defense was forced to eat crow and admit that the hacking never happened.

The real story regarding Russia’s role in the 2016 election takes place over several continents and involves the CIA and various foreign governments. In contrast, the IG had a limited charge that could not in scope exit the confines of FBI headquarters.

It appears that Barr and Durham are making some progress on the international front. They went to Italy to inquire about Joseph Mifsud, who was falsely identified by the FBI as a Russian asset. Mifsud has documented connections to British spy agencies. He traveled to the United States in early February 2017 as a guest of the State Department, an accommodation not ordinarily made to Russian operatives who just stole an election.

A Ukrainian judge has ruled that his country illegally meddled against Trump in the 2016 election. Trump has requested that the Ukrainian president investigate. Democrats in Congress are trying to impeach him for daring to go there, an obvious attempt to discourage further inquiry.

As I predicted in April, the CIA part of the investigation may run aground on the shoals of secrecy inherent to foreign relations and, in the case of Great Britain, written into the Five Eyes Agreement. John Brennan, or at least foreign intelligence services, may tell the Attorney General to get lost, because none of it is any of his business. Then what?

We are not there yet. The IG report is about to be released and Barr is correct to counsel that it is limited in reach. The Durham investigation is exploring the origins of the Russia saga. It remains to be seen how far that investigation will get in uncovering evidence of what, by all appearances, was a political operation.

Thomas Farnan is an attorney living in Pittsburgh. His Twitter handle is @tfarnanlaw.