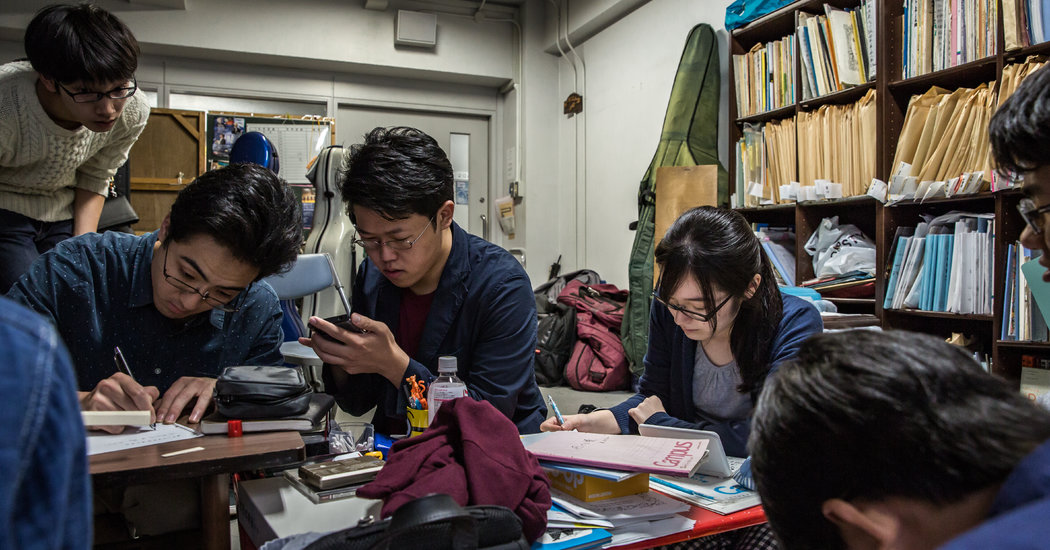 [Read this article in Japanese.]

TOKYO — From a young age, Satomi Hayashi studied hard and excelled academically. It seemed only natural that she would follow in her father’s footsteps and attend the University of Tokyo, Japan’s most prestigious institution.

As soon as she was admitted, her friends warned that she was spoiling her marriage prospects. Men, they said, would be intimidated by a diploma from Todai, as the university is known in Japan. Spooked, she searched Google for “Can Todai women get married?” and discovered it was a well-trod stereotype.

The admonitions didn’t stop her. But Ms. Hayashi, 21, wondered if other women were scared off.

When she arrived three years ago, fewer than one in five undergraduates at the university were women.

The dearth of women at Todai is a byproduct of deep-seated gender inequality in Japan, where women are still not expected to achieve as much as men and sometimes hold themselves back from educational opportunities.

Prime Minister Shinzo Abe has promoted an agenda of female empowerment, boasting that Japan’s labor force participation rate among women outranks even the United States. Yet few women make it to the executive suite or the highest levels of government.

The disconnect starts at school. Although women make up nearly half the nation’s undergraduate population, the oldest and most elite universities reflect — and magnify — a lackluster record in elevating women to the most powerful reaches of society.

For nearly two decades, enrollment of women at the University of Tokyo has hovered around 20 percent, an imparity that extends across many top colleges. Among seven publicly funded national institutions, women make up just over one quarter of undergraduates. At the exclusive private universities Keio and Waseda, women are a little over a third.

They lag other selective institutions across Asia. Women are close to half of the student body at Peking University in China, 40 percent of Seoul National in South Korea and 51 percent of the National University of Singapore.

At Todai, “you can see right away there is something completely out of balance,” said Ms. Hayashi, a literature major. “Because women are half of society, there is something strange about a university that is only 20 percent women.”

In status-conscious Japan, a diploma from Todai is the ultimate pedigree — the equivalent of Harvard, Stanford and M.I.T. all rolled into one. It opens doors in politics, business, law and science.

More prime ministers have graduated from Todai than any other universities, while more than half of the country’s Supreme Court justices are alumni. The university boasts the highest number of graduates to go on to Parliament or win Nobel Prizes.

“We have the most powerful education that we can dangle” in front of anyone, said Nobuko Kobayashi, a 1996 Todai graduate and a partner at EY Japan, where less than 10 percent of partners are women.

“We were branded with it,” she said. “We almost bask in its glory unconsciously.”

Speaking this year to freshmen at Todai, Chizuko Ueno, a retired professor of gender studies, suggested the imbalance was a symptom of inequality that extended beyond higher education.

“Even before students enter the university, there is already hidden sexism,” Ms. Ueno said. “Unfortunately,” she added, “the University of Tokyo is an example of this.”

Her sentiments touched a nerve in the audience. On Twitter, male students complained of being harangued. “Why is she not celebrating us, the male students?” one wrote. Another called it “feminist propaganda.”

In the speech, Ms. Ueno referred to a scandal exposing deliberate discrimination at Tokyo Medical University, where officials acknowledged suppressing the entrance-exam scores of female applicants for years.

Administrators wanted to limit the proportion of women to 30 percent, claiming that female doctors were likely to stop working after getting married or giving birth. A year after the scandal was revealed, women passed at a higher rate than men.

There is no evidence that the University of Tokyo manipulates exam results. Rather, officials say, women’s admissions are consistent with the applicant pool.

“We are just like stores that don’t have enough customers,” said Akiko Kumada, one of the few female engineering professors at Todai and a member of its gender equality committee.

“Right now,” she said, “we are not getting enough female customers.”

Ms. Kumada has a few theories. Young girls, she said, are repeatedly fed the idea that academic achievement is not feminine. She cited lyrics by AKB48, a female pop band, like “While I’m still in school/It’s O.K. to be stupid.”

Some women, she said, might fear that a Todai degree inevitably leads to a high-powered career in a brutal working culture. One graduate committed suicide after telling friends she had endured harassment and grueling hours at an advertising agency.

To recruit women, the university has mostly tried small-bore measures.

Todai sends female students back to their high schools to encourage younger women to take the entrance exam. In a recruitment brochure, “we try to balance the photos we run,” said Ms. Kumada, “and make sure we have women in them.”

A more substantial policy provides dormitory subsidies to women from outside Greater Tokyo, an effort to mollify parents who might worry about safety in the big city. The university pays 30,000 yen a month — roughly $275 — for about 100 female students. Critics have attacked the policy as discriminatory against men.

Outright quotas for women have been a nonstarter: Todai administrators reject affirmative action as inequitable.

“Do we really want to create a special quota for female students whose academic achievement may be much lower?” Ms. Kumada said.

Staunchly traditional, Todai draws from the same high schools year after year. More than a quarter of students who enrolled in 2019 came from just 10 high schools, seven of which are all male.

Unconsciously or not, high school and college administrators say, parents are more likely to push sons to achieve.

“With sons, parents really expect a lot and want their boys to perform to the maximum level and aim as high as they can go,” said Hiroshi Ono, principal of Tokyo Gakugei University High School, which sent 45 students to Todai this year, 11 of them women.

Parents, Mr. Ono said, “feel bad about pushing girls to work that hard — they think it would be better for them to get married and be a housewife.”

Even at Oin Girls School, which sends more women to Todai than any other high school, administrators said girls may feel ambivalent about pursuing an elite education.

For a vast majority of students, admission to Todai rests solely on one exam for which students spend years studying. High school grades and extracurriculars carry no weight.

Zkai, a cram school for university entrance exams, has a high acceptance rate to Todai. Wataru Miyahara, a director, said fewer girls study for the exam.

“It’s hard to tell which is the chicken and which is the egg,” he said. “But there are so few girls at Todai, so it’s hard for girls to look at Todai and say, ‘I want to go there.’”

Whatever the reason, he said, “They are not as ambitious as boys.”

Three years ago, Todai invited high schools to recommend one male and one female student who could forgo the exam in exchange for an essay or group interview. Fewer than 70 students a year are admitted this way, out of a freshman class of more than 3,000.

Aine Adachi, 21, who came to Todai three years ago through this system, said expanding the criteria to evaluate strengths not captured by one high-stakes test could bring more women into the university.

“Having one criteria to judge a person by doesn’t make it fair,” she said.

On campus, Ms. Adachi, who is studying law, said she feels scrutinized as a minority. Gender discrimination, she said, comes in subtle forms.

Once she and a male classmate were planning a club trip, huddled over laptops in a cafe near campus.

Another male classmate walked up and observed their conversation. “It looks like the boss and his secretary!” he quipped.

“Why do you assume I’m the secretary?” Ms. Adachi retorted. “Why can’t I be the boss?”

Women at Todai often feel isolated. When a class gathered for a graduation photo, Kiri Sugimoto, 24, a law student, was the only woman.

“What irritated me was that the men made remarks like having me in the picture would look great because it wouldn’t look like a boys prep school photo,” she said. “I was treated as the decorative rose among stones. That irritated me to be treated like that.”

Male students don’t necessarily regard the campus demography as a problem.

Hiroaki Kitamura, 19, an engineering major, said he didn’t think men would act differently with more women in class. “It’s not like we have sexual conversations just because there are so few women,” he said.

Although, he added, classes might be “more fashionable” if more women enrolled.

Some Todai men avoid socializing with female classmates, favoring activities where most of the women come from other universities.

At a Todai ballroom-dancing club, Erica Nakayama, 24, a masters student, said she and her classmates were outnumbered by women from other universities.

Todai men, she said, frequently typecast female peers as too serious. “They said we weren’t cute enough,” she said.

“A boy once said, ‘Todai girls are a little scary,’” Ms. Nakayama recalled. “I just kind of laughed and let it go. But in a way it did kind of hurt my feelings.”

He joined a tennis club that has a longstanding partnership with a Catholic women’s college. No Todai women have joined.

Inviting female classmates, he said, might upset the group’s harmony. “Todai women really don’t get along with women from other universities,” he said. “Todai women have pride.”

Men have little incentive to change. Campus advocacy is minimal. Even an investigation by the student newspaper about clubs that exclude Todai women did not identify the exclusive groups.

Women hesitate to speak out. Ms. Nakayama said she avoided activism that might be construed as feminist.

“It might have some repercussions for me,” she said. People “might think I’m acting too manly or too strong.”

In and outside class, Ms. Hayashi said, women tolerate a culture in which men make jokes filled with sexual innuendo or comment on women’s appearances.

“You are expected to understand or communicate with these sexual jokes,” she said. “Otherwise you feel kind of left out.”

“You just have to understand,” she said, “and accept the male view.”