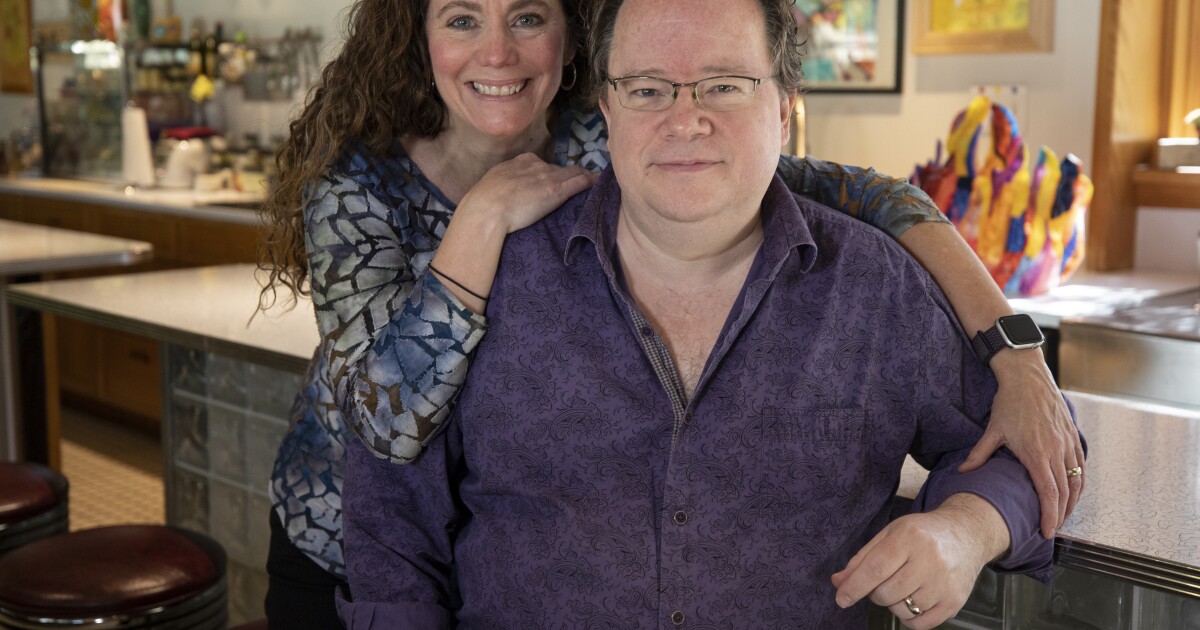 Earlier this year, Penzeys Spices unveiled its latest blend — a salt-free chive and garlic mix for sprinkling on tomatoes, scrambled eggs or salmon. But instead of printing a recipe on the label of Justice seasoning, the owner of the company sent a pointed message to his customers:

“Justice is the light that has guided America through every storm. Now one party wants to obstruct it, twist it, steal it away from We the People to gift it to their benefactors. America’s future depends on us not letting that happen.”

The statement aimed at the Republican Party and supporters of President Trump was just one of many times Bill Penzey has mixed his politics with his parsley and paprika.

Penzeys Spices has spent hundreds of thousands of dollars this fall promoting Facebook ads — long stream-of-consciousness missives — supporting impeachment of Trump or railing against the Republican Party and Fox News. After the 2016 election, Penzey sent an email blast to customers, saying if they voted for Trump they had “just committed the biggest act of racism in American history since Wallace stood in the schoolhouse doorway 53 years ago,” referring to the segregationist Alabama Gov. George Wallace.

Penzey’s outspokenness has cost his company some longtime customers, but he says he has no choice: “The luxury of not being on a side is something of the past.”

It’s an unusual and risky move for any business; most typically try to avoid alienating half their customer base. But it’s a stance Penzey can take, since he founded and owns his namesake company and has no shareholders or franchisees to answer to.

The spice merchant’s activism prompts delight and shopping orders from liberals, and ire and boycotts from conservatives. It’s a level of notoriety Penzey says he never sought for himself or his company, but he said he felt compelled to speak out because of the danger he believes Trump’s presidency poses.

“This isn’t a line that we chose to cross. The line crossed us,” the soft-spoken 56-year-old said in the kitchen of his home. “Cooks take the time to care for other people.”

His company has spent more than $700,000 on Facebook ads promoting impeachment, at one point spending more than anyone but Trump’s reelection campaign, according to data compiled by the marketing firm Bully Pulpit Interactive that was first reported by Axios.

“It’s unusual to have someone be so vocal,” said Pradeep Chintagunta, a marketing professor at the University of Chicago’s Booth School of Business. “Here, because the founder shares his name with the name of the organization, everything is intimately tied to the brand name as well, and the spillover tends to be much more dramatic.”

Even businesses that don’t court controversy can find themselves facing boycotts over a celebrity spokesperson’s views, a founder’s political fundraiser or a CEO’s donations.

A showcase for compelling storytelling
from the Los Angeles Times.

But like many things, businesses’ approach to politics has changed in the Trump era: Corporate leaders increasingly speak out directly about the administration’s policies and the president’s statements. Perhaps no one personifies this shift better than Penzey.

“I want other businesses to look at what we’re doing,” Penzey said while writing new Facebook ads at his home. “If you want customers to support your business, you have to support the values and lives of your customers.”

His home is three miles from his main production facility; both are in Wauwatosa, a town of fewer than 50,000 people just outside Milwaukee that has voted increasingly Democratic in recent years.

In the warehouse, which is big enough to hold six football fields, the air was thick with the toasty, warm scent of cumin as its seeds were being ground into a fine powder on a recent day.

Raw ingredients — Tahitian vanilla beans, whole Chinese star anise, Indonesian cinnamon sticks, Turkish bay leaves — are shipped here in barrels that weigh hundreds of pounds. Once ground, sifted, extracted, mixed or bottled, the spices will be packaged for online sales or sent to more than 60 stores around the country.

Penzey started the company in 1986, primarily as a catalog mail-order business. But his exposure to the spice world — and politics — started decades earlier. Penzey’s family lived in the suburbs but ran a spice store in a minority neighborhood in urban Milwaukee; as a 10-year-old, he worked in the shop on weekends to earn his allowance of $1 per week.

The multicultural customers who visited his parents’ shop, as well as the deep-rooted liberalism of Milwaukee, shaped Penzey’s outlook, he said.

“Milwaukee had a socialist tradition here; even in the times of the Red Scare it was tough to vote them out,” Penzey said. He said that period taught him that “when government actually spends taxpayer dollars on things that benefit taxpayers, the buses run on time, the streets get plowed, the schools are good.”

He has not shied from his political views: In the mid-2000s, he put a gay male couple who had triplets via a surrogate on his spice magazine’s cover, long before same-sex marriage had the support it does today. He lost nearly a tenth of his subscribers.

In 2010, amid the battle over immigration crackdowns in Arizona, Penzey created the Arizona Dreaming spice blend. That same year, Penzey sent gift boxes of spices to every teacher and support worker in Milwaukee’s schools — including a new blend called Forward as then-Gov. Scott Walker went to war with the teachers union.

“We started a whole support-your-local-teacher campaign, ran ads in the big newspapers, got all of our customers involved,” Penzey said. “That was a big step for us.”

But all of this pales to his reaction to Trump.

“Love in the time of Impeachment” was the headline on Penzey’s Facebook ad the night before elections last month. After urging voters to head to the polls in Kentucky, Virginia and Mississippi, Penzey wrote: “For the rest of us it’s time to get talking 11.3.2020. We still don’t fully know what happened with the last presidential election. How the Republican Party sold out to Fox and its owners and ultimately arrived on the same page as Russia is one for the history books to work out.”

The message also seeps into his products, like the Tsardust Memories spice blend. The company’s website offers a recipe for “a wonderfully substantial ‘Nothing Burger,’ ” a reference to Trump loyalists’ description of the special counsel investigation that found Trump’s campaign welcomed Russian help in 2016, but did not establish proof of a criminal conspiracy with Moscow.

For some customers, Penzey’s positions cross a line.

“I used to use their spices faithfully. My mother introduced me to them probably eight years ago,” said Melinda Barnett, a Republican from Owatonna, Minn., who was among conservatives calling for a boycott of Penzeys on Twitter last month. “Everyone in this country has a right to their political views, but I think it’s offensive, and it makes me feel underappreciated as a customer.”

“There’s not quite the selection but I have been able to manage just fine,” she said. “I do miss their selection of dried chilis.”

Other customers, like Roger Bell, said he was thrilled by Penzey’s political involvement.

“I think it’s good for companies to be involved in what they think is right or to speak about it,” the retired social worker, 69, said as he stopped in the flagship store to pick up Rocky Mountain seasoning for the pork chops he planned to sear that evening. “I do shop some places just because of their politics and the way they treat people and employees and the customers, and things like fair trade.”

“Well, I hear he’s very political,” the engineer, 59, said at the Wauwatosa store, adding that some of his friends avoid the shop because of Penzey’s activism. “His views are his views. I’m just here for the spices.”

Penzey finds controversy over his political musings amusing, given the world-changing and often hostility-filled history of the spice trade over millenniums.

“The spice trade invented capitalism, it invented the stock market, it pushed people to venture into interacting with other cultures before they were ready to interact with other cultures,” Penzey said. “It created a lot of divisions, resentments and borders we have today. How can we use that same thing to do something a little bit different?”

Penzey declined to release information about sales, but said he has gained more customers than he has lost.

After an October announcement that every penny of new customer sales would go to pro-impeachment ads on Facebook, Penzeys sold $465,000 in spices to first-time buyers over a three-day period, he said.

“You lose some people, but right now, oh boy,” he said.

The one problem is that many of the new customers don’t cook, while many of the customers he has lost were regular cooks who routinely needed to replenish their spice supply.

“A lot of people send me pictures of their spice collection. I can see the spices are all above the top of the label. How do we get the [new] customers to see all the good things set in motion when you take the time to cook for the people in your life,” Penzey said. “I got a bunch more customers. Trying to get them to become regular customers is the trick.”

In the meantime, Penzey shows no signs of slowing his political activism. He recently trademarked a new catchphrase: “Season Liberally.”