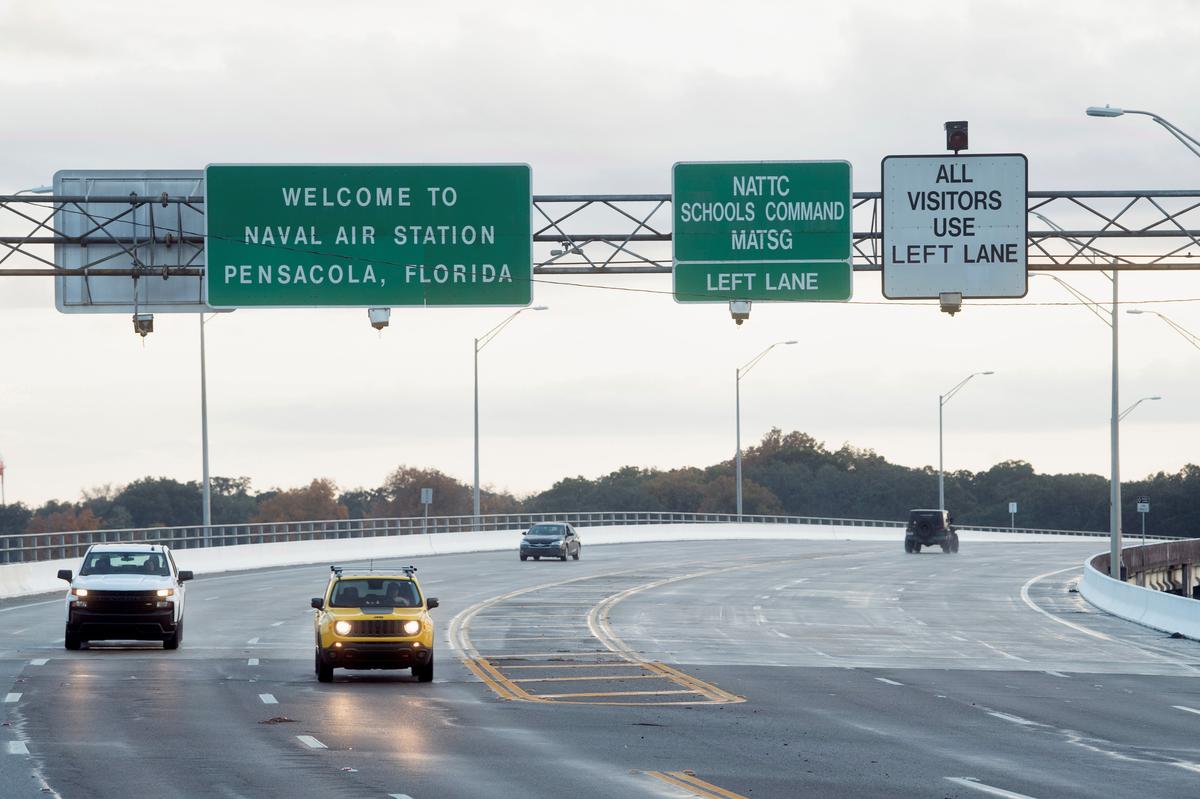 PENSACOLA, Fla. (Reuters) – The Saudi airman accused of killing three people at a U.S. Navy base in Florida appeared to have posted criticism of U.S. wars and quoted slain al Qaeda leader Osama bin Laden on social media hours before the shooting spree, according to a group that monitors online extremism.

Traffic on and off base is restricted after a member of the Saudi Air Force visiting the United States for military training was the suspect in a shooting at Naval Air Station Pensacola, in Pensacola, Florida, U.S. December 6, 2019. REUTERS/Michael Spooneybarger

Federal investigators have not disclosed any motive behind the attack, which unfolded at dawn on Friday when the Saudi national is said to have began firing a handgun inside a classroom at the Naval Air Station Pensacola.

A sheriff’s deputy fatally shot the gunman, authorities said, ending the second deadly attack at a U.S. military base within a week. Hours later, Saudi Arabia’s King Salman called U.S. President Donald Trump to extend his condolences and pledge his kingdom’s support in the investigation.

Authorities confirmed the suspect was a member of the Royal Saudi Air Force who was on the base as part of a U.S. Navy training program designed to foster links with foreign allies. They declined to disclose his name or identify his victims.

Six other Saudi nationals were being questioned by investigators in Florida, three of whom were seen filming the incident, the New York Times reported, citing an unidentified person briefed on the initial stages of the investigation.

An uncle of Alshamrani, Saad bin Hantim Alshamrani, told CNN from Saudi Arabia that his nephew was 21, and “likable and mannered towards his family and the community.” He said his nephew “has his religion, his prayer, his honesty and commitments.” If his nephew was guilty, then he will be “accountable before God,” the uncle said.

The younger Alshamrani appeared to have posted a justification of his planned attack in English on Twitter a few hours before it began, according to SITE Intelligence Group, which tracks Islamist extremism on the internet.

He referred to U.S. wars in the Middle East, writing that he hated the American people for “committing crimes not only against Muslims but also humanity,” and criticizing Washington’s support for Israel, SITE’s analysis said. He also quoted bin Laden, the Saudi mastermind of the attacks on the United States on Sept. 11, 2001, according to SITE.

The base outside Pensacola, near Florida’s border with Alabama, is a major training site for the Navy and employs about 16,000 military and 7,400 civilian personnel, according to its website. It is a prominent force in the city.

Teresa O’Neal, a baker selling loaves of bread and pastries at a downtown flea market, said she has a nephew in the Air Force who was on base at the time of shooting. Her daughter lives around the corner.

“We had no idea they trained foreign nationals out there,” she said. “That’s got to change, these people’s own militaries should train them.”

On Wednesday, a U.S. sailor shot three civilians at the historic Pearl Harbor military base in Hawaii, killing two of them before taking his own life.

Military personnel are normally restricted from carrying weapons on U.S. bases unless they are part of their daily duties, something O’Neal criticized.

“Why American soldiers cannot carry weapons on base is a big question,” she said. “Our boys were just sitting ducks in that classroom.”