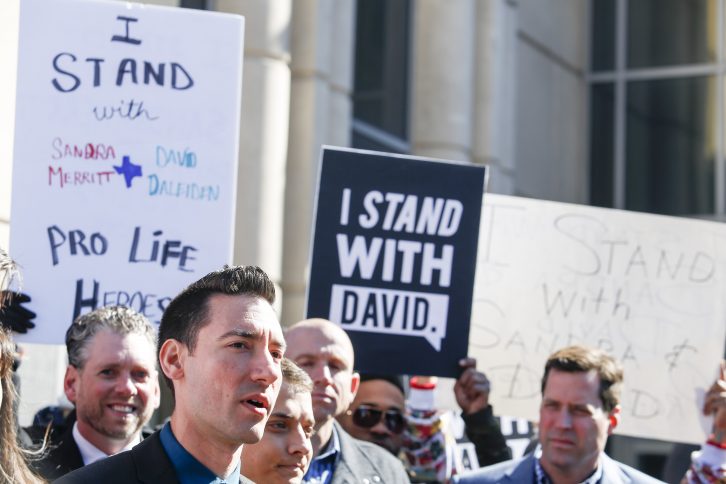 A San Francisco judge dropped multiple charges against pro-life undercover reporter David Daleiden on Friday, but the criminal trial will proceed in connection to his 2015 exposé into the abortion industry’s organ harvesting operations.

A San Francisco judge dropped six of the charges against Daleiden and his colleague, Sandra Merritt, in connection to undercover videos that captured abortion industry executives discussing the harvesting and sale of body parts obtained from aborted babies. The criminal trial, however, will continue. Daleiden, founder of the Center for Medical Progress, ripped into California attorney general Xavier Becerra, as well as his predecessor, Sen. Kamala Harris (D., Calif.), the failed presidential candidate who launched the criminal probe into his journalistic methods during her tenure.

“The real criminals are the Planned Parenthood leadership who sold fetal body parts from late-term abortions and weaponized the justice system to try to cover it up,” Daleiden said in a statement.

The complaint accuses the two of entering “into an agreement to create a fictitious business for the sole purpose of gaining access to individuals employed in the healthcare and biomedical research industry to surreptitiously record private meetings” allegedly in violation of state law. It also accuses CMP of secretly recording individuals who had “an expectation of privacy” when they spoke to the undercover reporters in restaurants, convention centers, and abortion clinics.

The attorney general’s office did not respond to request for comment.

The complaint lists 14 individuals who are not identified, but were recorded by Daleiden and Merritt. The recordings took place in California, which is a two-party consent state for recording.

Pro-life groups said the prosecution is motivated by politics and a threat to commonplace news gathering techniques.

“The same year David and Sandra published their recordings of Planned Parenthood employees haggling over the price of aborted baby body parts, videos taken by undercover animal rights activists were praised and led to investigations of abuse in the poultry industry by then-Attorney General Kamala Harris—the same AG who then levied charges against the pro-life reporters,” Lila Rose, founder and president of Live Action, said in a statement. “Instead of praise, David and Sandra still have nine charges against them that have nothing to do with violating privacy or video recording laws but everything to do with protecting the powerful and wealthy abortion industry.”

Terry Schilling, executive director of the American Principles Project, said the case demonstrated the abortion lobby’s influence on the political and legal landscape. Planned Parenthood and its allies have donated tens of thousands of dollars to Becerra and Harris over the course of their political careers.

“It is grimly ironic that in the four years since the scandal broke regarding Planned Parenthood’s sale of baby body parts for profit, the only people who continue to face prosecution are the citizen journalists who broke the news,” he told the Washington Free Beacon in an email.

Daleiden and Merritt faced similar charges in Texas after the release of the videos. The charges were dropped in 2016 after a district judge called the indictment “defective.” The legal rebuke did not deter Becerra from moving forward with his case.

“The right to privacy is a cornerstone of California’s Constitution, and a right that is foundational in a free democratic society. We will not tolerate the criminal recording of confidential conversations,” California attorney general Xavier Becerra said when the charges were first announced in 2017.

Daleiden’s pro-life organization, the Center for Medical Progress, recently filed a defamation lawsuit against a former Planned Parenthood chief medical officer for claiming the videos were fake and edited. Daleiden is also appealing a $2.2 million civil judgment that a San Francisco jury awarded to Planned Parenthood in connection to the scandal.