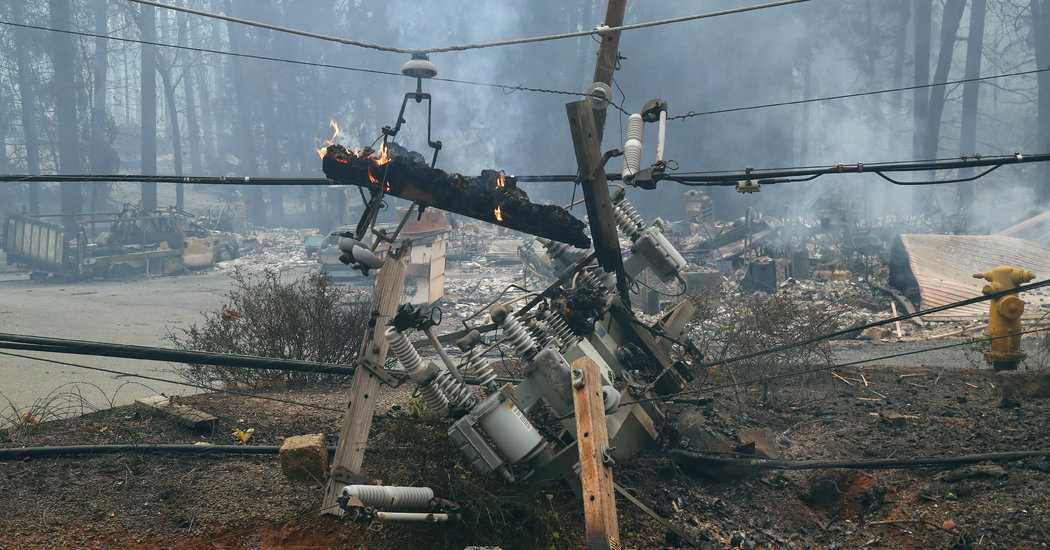 After months of tense negotiations, Pacific Gas & Electric and lawyers for victims of wildfires that killed dozens of people and destroyed tens of thousands of homes and businesses agreed on Friday to a multibillion-dollar legal settlement.

The victims wouldn’t receive all of the $13.5 billion that is being made available under the agreement. Some of it would go toward paying the claims of some government agencies, and the victims’ lawyers would receive a portion.

The accord is a big step forward for PG&E, whose response to wildfires has often faltered. For victims, the money would help them rebuild homes and lives after months of uncertainty, though many would most likely get a lot less than they had hoped for or need. And a settlement would significantly increase the likelihood that PG&E will emerge from bankruptcy before a crucial deadline in June. The company filed for bankruptcy protection in January, saying it faced an estimated $30 billion in wildfire claims.

“We’ve turned a corner,” said Patrick McCallum, a Sacramento lobbyist who runs the wildfire victims group Up From the Ashes. “We’re close. Finally there’s a solution for wildfire victims.”

The settlement, which requires approval by the United States Bankruptcy Court, follows accords that PG&E announced with insurance companies and some government agencies. A court hearing is scheduled for Dec. 20.

To receive payments, wildfire victims must file claims by Dec. 31, a deadline that was extended after tens of thousands of victims failed to submit claims and some said they were not even aware of the process.

Even with the settlement, the future of the utility’s operations remains uncertain. The devastating wildfires in 2017 and 2018, including the Camp Fire, which destroyed the Northern California town of Paradise, enraged many residents and elected officials, including Gov. Gavin Newsom and Mayor Sam Liccardo of San Jose. Those leaders have proposed making PG&E a public utility, turning it into a cooperative owned by its customers or selling it to an entity like Warren E. Buffett’s Berkshire Hathaway, which owns several large energy companies.

“There have been many calls for PG&E to change in recent years,” the company’s chief executive, Bill Johnson, said in a statement. “PG&E’s leadership team has heard those calls for change, and we realize we need to do even more to be a different company now and in the future.”

The breadth of the settlement will help PG&E move on from its biggest legal challenges. The accord not only settles claims arising from the wildfires of 2018 and 2017 but also encompasses those from the Butte Fire in 2015 and the Ghost Ship fire in 2016 in Oakland. PG&E was one of several organizations sued by the families of victims of the Ghost Ship fire, which killed 36 people during a party in a warehouse with a long record of safety violations.

PG&E said the deal would also settle claims from the 2017 Tubbs Fire, a giant fire in Northern California. The California Department of Forestry and Fire Protection had cleared PG&E of responsibility for that blaze, but a California Superior Court judge scheduled a January trial to determine whether PG&E’s equipment caused it. The settlement could eliminate the need for that trial.

Along with the destruction from wildfires caused by PG&E’s equipment, the utility has faced growing criticism over its failure to inspect and maintain its transmission network. Many Californians have also expressed anger at how the company shut off power to millions of people during periods of high winds and dry conditions to prevent fires.

A report released last week by the California Public Utilities Commission identified a 100-year-old transmission tower as the cause of the Camp Fire. It also revealed significant shortcomings in PG&E’s inspections of its power lines, a major cause of wildfires in the state.

In recent bankruptcy negotiations, representatives of Mr. Newsom have pressed PG&E to compensate wildfire victims sufficiently, treat workers fairly and maintain its commitment to clean energy. He has said the utility that emerges from bankruptcy must make safety a priority.

In a statement, lawyers for the victims said a trust would be set up to pay the victims’ claims, funded with a mix of “cash, equity and other consideration.” The equity is expected to be stock in the PG&E that emerges from bankruptcy. But the stock could lose some of its value if PG&E faces new financial challenges, including from wildfires or other disasters caused by its equipment, potentially shortchanging victims.

PG&E has already agreed to pay holders of insurance claims $11 billion in cash.

PG&E’s stock surged this week as investors became more upbeat about the prospects of a deal with the wildfire victims, but closed down 1.3 percent on Friday.

The company had originally offered to pay individual victims up to $8.4 billion, but increased its offer last month to try to win over the victims. Lawyers for the victims estimated in July that claims against PG&E totaled $54 billion for the fires of 2017 and 2018.

PG&E must emerge from bankruptcy by June in order to draw from a wildfire fund that California set up this year. The fund will help the state’s three large investor-owned utilities pay future wildfire claims if they meet certain conditions like improving safety practices.

On Thursday, a federal judge overseeing PG&E’s probation stemming from a 2010 gas explosion that killed eight people in a San Francisco suburb asked the utility to provide more information about equipment and inspection failures before the Camp Fire. Depending on the company’s answers, the judge, William H. Alsup, could initiate new disciplinary hearings or impose additional penalties against the company.