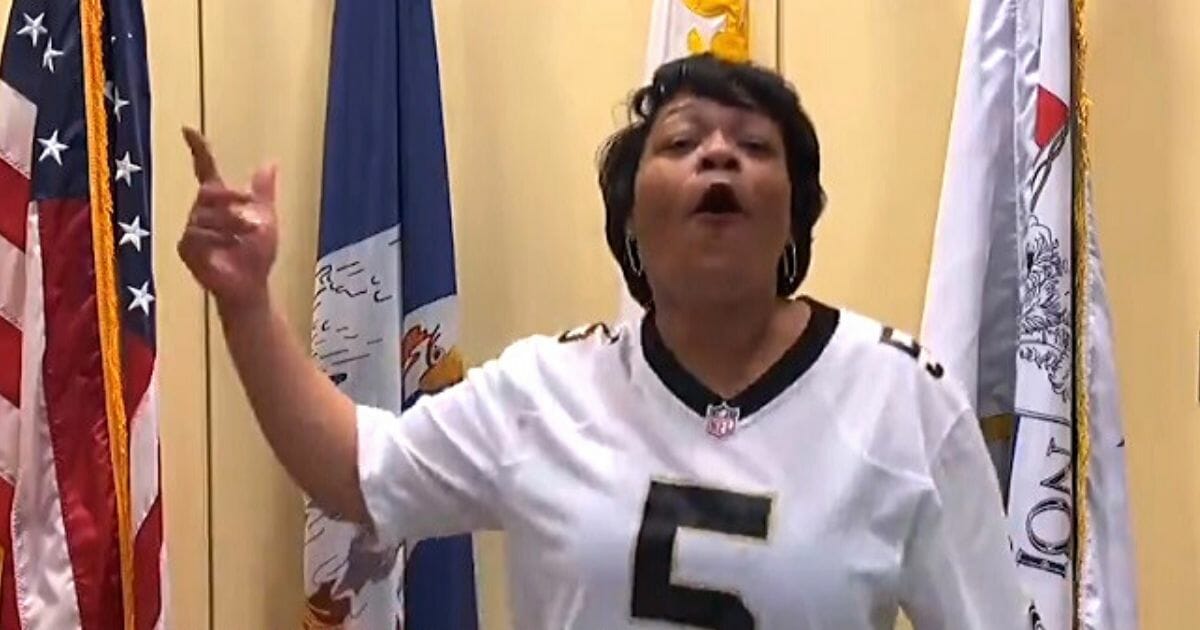 A Democratic mayor is catching flak for dancing and making bets despite running a city with noticeably crumbling infrastructure.

New Orleans Mayor LaToya Cantrell posted on Twitter Friday to bet San Francisco Mayor London Breed on the outcome of a football game. In the video, she can be seen dancing and holding up a bottle of hard alcohol.

“We are sister mayors London Breed, yet on Sunday, our Saints will be beat your 49ers,” Cantrell wrote. “I am putting a pot of our world renowned Dooky Chase gumbo and a bottle of our Sazerac Rye made with SWB New Orleans water on the table!”

We are sister mayors @LondonBreed, yet on Sunday, our @Saints will be beat your 49ers! I am putting a pot of our world renowned Dooky Chase gumbo and a bottle of our @SazeracRye made with @SWBNewOrleans water on the table! Whatcha got? #WhoDat pic.twitter.com/b2uAxcfBv0

Instead of betting fellow Democrats on the outcome of football games, it appears Cantrell needs to pay more attention to her own city’s failing infrastructure.

Although Cantrell may have plenty of rye whiskey to drink, the rest of her city isn’t as lucky. New Orleans’ antiquated water and sewage system is prone to failure, and boil notices are a shockingly frequent staple of life in the Big Easy.

A list of media releases from the New Orleans Sewage and Water Board show residents had to resort to the primitive water purification method at least seven times since October thanks to the precautions being ordered or expanded.

Should Mayor Cantrell focus on her own city instead of making bets on football games?

Twitter users were quick to call the mayor out for the seemingly flippant attitude towards the historic city’s woes.

“Did the mayor really just do this? 30″ water main busting and she’s dancing/playing the fiddle while the city is flooding/burning,” one person questioned.

Did the mayor really just do this? 30” water main busting and she’s dancing/playing the fiddle while the city is flooding/burning? #wokelikemitch

Damning video of the ruptured 30″ pipe was uploaded by a local reporter and shows water flooding a part of the city. According to the SWBNO website, this was one such incident that required residents to boil water.

A half-sunk Jeep can be seen in the clip, inundated up to its tires in the surging water.

We’re here on S. Johnson Street, where it appears this massive 30 inch water main break originated. You’ll notice rushing waves of water sprouting out of the ground. A number of cars in the area are taking on water. @WWLTV pic.twitter.com/BNvX840Lww

While the outcome of Cantrell’s bet is still yet to be seen, it appears that New Orleans voters’ gamble on this progressive mayor isn’t exactly paying out like they may have imagined.

If this is the New Orleans water Sezarac rye is made from, San Francisco’s mayor would do well to steer clear of it.