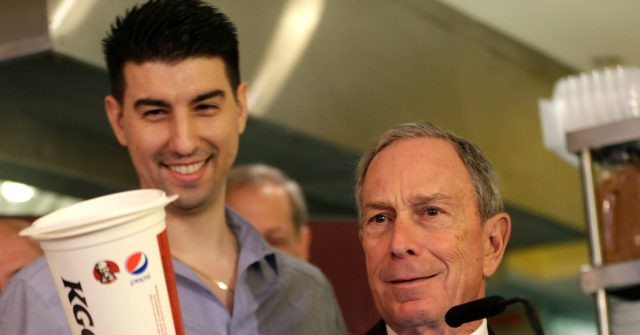 Billionaire Michael Bloomberg once asserted that his numerous nanny state proposals – including his pursuit of banning large sugary beverages and enacting sweeping gun control measures – have earned him a spot in heaven.

A flashback of remarks from Bloomberg has surfaced, featuring the former New York City mayor proclaiming that he “earned” his place in heaven.

Bloomberg made the remarks in a 2014 New York Times article detailing his plan to drop $50 million on gun control efforts, targeting the NRA.

“We’ve got to make them afraid of us,” he added.

“I am telling you if there is a God, when I get to heaven I’m not stopping to be interviewed,” Bloomberg told the Times, referencing his work on “gun safety, obesity and smoking cessation.”

“I am heading straight in. I have earned my place in heaven. It’s not even close,” he added.

Another unflattering flashback of Bloomberg resurfaced last month, featuring the billionaire describing tax hikes on the poor as a “good thing.” He made the remarks during an appearance at the International Monetary Fund’s Spring Meeting last year.

The behavioral changes the poor would be forced to make, he argued, would ultimately help them “live longer.”

“So, I listen to people saying, ‘Oh, we don’t want to tax the poor.’ Well, we want the poor to live longer so that they can get an education and enjoy life. And that’s why you do want to do exactly what a lot of people say you don’t want to do,” he said, arguing in favor of the nanny state and using sugary drinks — something he desperately tried to tackle as the mayor of New York City — as an example.

The question is do you want to pander to those people? Or do you want to get them to live longer? There’s just no question. If you raise taxes on full sugary drinks, for example, they will drink less and there’s just no question that full sugar drinks are one of the major contributors to obesity, and obesity is one of the major contributors to heart disease and cancer and a variety of other things.

So, it’s like saying, “I don’t want to stop using coal because coal miners will go out of work, will lose their jobs.” We have a lot of soldiers in the United States in the U.S. Army, but we don’t want to go start a war just to give them something to do and that’s exactly what you’re saying when you say, “Well, let’s keep coal killing people because we don’t want coal miners to lose their jobs.” The truth of the matter is that there aren’t very many coal miners left anyways, and we can find other things for them to do. But the comparison is: a life or a job. Or, taxes or life? Which do you want to do? Take your poison.